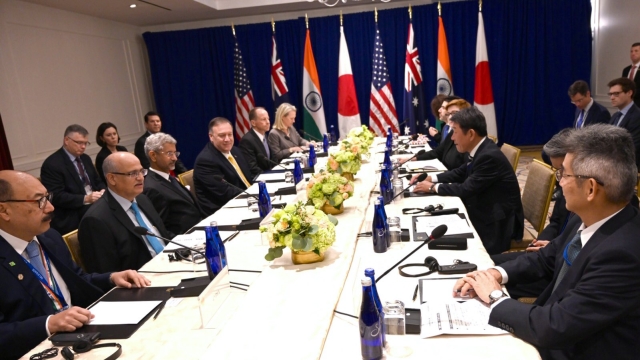 Australia and the United States (US) have reaffirmed their commitment to bolstering QUAD consultations and engagement with Japan and India, pledging to work side by side, reports news agency ANI.

The US and Australia yesterday (28 July) issued a joint statement on the occasion of the 30th Australia-US Ministerial Consultations (AUSMIN) 2020, during which the representatives from the two nations underscored their commitment to the QUAD engagement.

The secretaries and ministers from the two nations also asserted that they will be working side by side with ASEAN, India, Japan, the Republic of Korea and the Fice Eyes partners to strengthen and maintain a region that is secure, prosperous, inclusive and rules-based.

The two nations openly expressed deep concern and disgruntlement with Chinese Communist Party (CCP) regime's efforts to erode Hong Kong's autonomy, its oppression of Uyghur Muslims and other minorities in Xinjiang province and its expansionist offensives in the South China Sea.