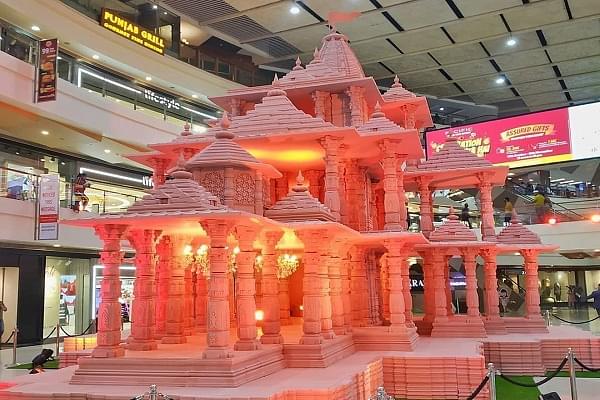 The Pacific Mall in Delhi's Tagore Garden area unveiled a large replica of the Bhavya Ram Mandir being constructed at the Ram Janmabhoomi in Ayodhya.

Here is a video of the Mandir replica which has been installed on the mall's ground floor.

As per an ANI report, the structure took 45 days to build and was made possible with the help of 80 experts. The structure is 32 feet high and 45 feet wide. As per the mall's manager they took a decision to construct the Mandir replica after discussions with vendors and management, and it seeks to spread festive cheer with the shoppers ahead of Diwali.

"...Diwali is a festival associated with Lord Ram so the replica of his temple is the best gift that we can give to our customers...", the executive director of Pacific Group was quoted as saying.

This move by the mall has earned high praise from shoppers.

"I am amazed to see this. Seeing this replica of Ram Temple is like a dream...", a shopper has been quoted as saying.

This Independence Day the mall had suspended a 16 foot model of a fighter jet to celebrate India's acquisition of the Rafale fighter jets.