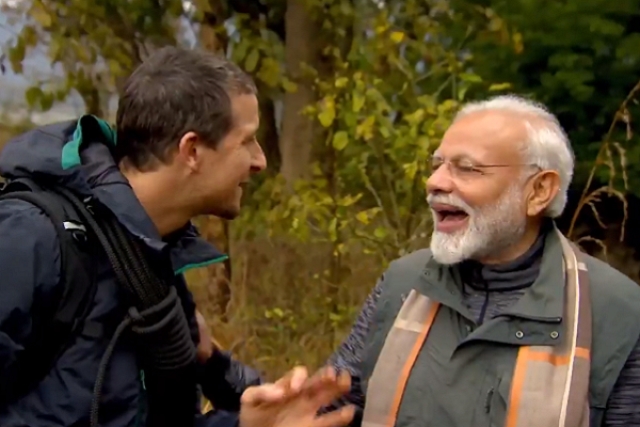 Television presenter Bear Grylls, the host of popular survival television series Man vs Wild released a trailer of him traversing Uttarakhand’s wilderness along with Prime Minister Narendra Modi in a special episode, set to air at 9 PM on 12 August.

People across 180 countries will get to see the unknown side of PM @narendramodi as he ventures into Indian wilderness to create awareness about animal conservation & environmental change. Catch Man Vs Wild with PM Modi @DiscoveryIN on August 12 @ 9 pm. #PMModionDiscovery pic.twitter.com/MW2E6aMleE

Prime Minister Modi is making a guest appearance on the show, in order to raise awareness about animal conservation and environmental change. In the trailer Prime Minister Modi can be seen walking through grasslands, forging a weapon and water-rafting along with Grylls.

Prime Minister Modi and Grylls can also be seen sharing lighthearted moments and Grylls talking about his job to keep the most important man in India, alive.

Grylls has famously hosted erstwhile US president Barack Obama in a Man vs Wild episode back in 2016.