‘You Can’t Even Give Rs 500 To Us As Promised’: Women Hired For Aarti Blast Karti Chidambaram On Scheme Giving Rs 6000 A Month 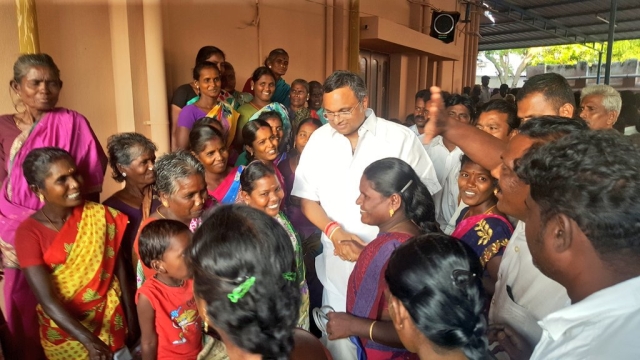 In a major embarrassment to Karti Chidambaram, son of ex minister P Chidambaram, he was snubbed by a group of local women in Manamadurai, Tamil Nadu. Reportedly, Congress workers had arranged for ‘Aarti’ to be performed by 25 women upon arrival of Chidambaram who is fighting elections from Sivaganga constituency. The women were promised Rs 500 each, but were given only Rs 800 in total.

Upon arrival, when Karti Chidambaram promised to give Rs 6,000 per month directly into their accounts, one of the ladies retorted back asking how would he give Rs 6,000 into when he can’t even give the promised Rs 500.

Responding to this, Karti said, "Please do not worry about such a little amount of Rs 500. Vote us, we'll make sure Rs 6,000 per month reaches your doorstep, through the bank accounts.."

The father-son duo P Chidambaram and Karti Chidambaram have been named as accused in a supplementary chargesheet filed by the CBI in the Aircel-Maxis case. Last October, Enforcement Directorate attached properties worth Rs 54 crore belonging to of Karti Chidambaram in connection with INX Media case.

The award of Congress ticket to Karti from Sivaganga constituency caused significant furore within the party. Karti, however, has said that it is his ‘hard-work’ not nepotism that got him the ticket. Karti Chidambaram was also heard saying that the alliance would retain its Sivaganga seat this time round via his victory.