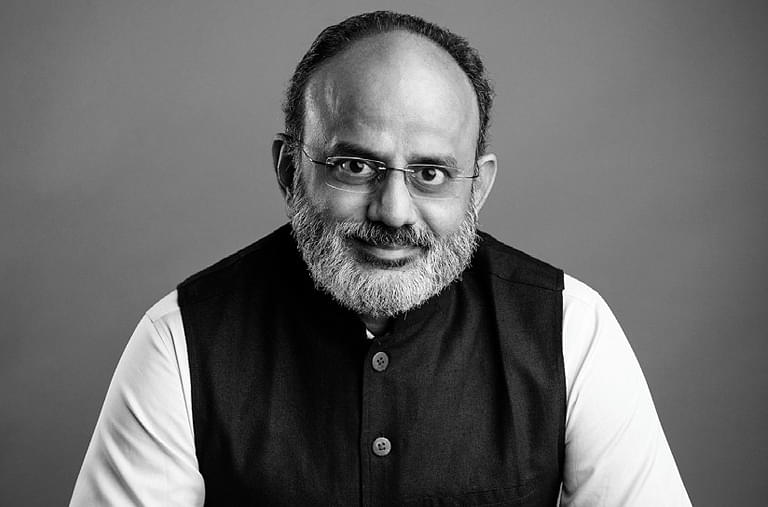 Hari Kiran Vadlamani is a serial and social entrepreneur. He is the founder of Advaita Academy, Indic Academy and Creative India. Over the last decade, he has produced, mentored and acted as a facilitator to several creative and intellectual initiatives by likeminded artists, scholars and public intellectuals.

Excerpts from an interview by Dr Kausik Gangopadhyay, Associate Professor in the area of Economics at the Indian Institute of Management, Kozhikode.

What is Dharmic Liberalism?

What is your definition of Dharma?

Dharma is an Indic word while Liberalism is a western movement. Many would be uneasy about this combination…

Liberalism has acquired different connotations across different countries and within a country across different time periods. Over the years, it has changed several shades as people try to define themselves better as to what they stand for. So you have various adjectives defining Liberalism: Economic Liberalism, Social Liberalism, Conservative Liberalism etc. So when I use Dharmic as an adjective to define a Liberal, it is defining the Liberal further wherein dharma plays a defining role to my being a Liberal.

From a guna point of view, dharma is sattvaguna and Liberalism is rajas. When you do your duty with a sense of service, with an attitude of seva to your nation, or the world, then you are predominantly sattvic in your disposition. Likewise, when you pursue your right to liberty and material happiness, the predominant guna in play is rajas. So a Dharmic Liberal is equally endowed with both the gunas. Such a person is simultaneously a Universalist and an Individualist.

Similarly, being Liberal is about your ego; being Dharmic is about humility. So you can say it is a combination of being humble and being confident of your abilities at the same time. Strains of this thought can be found in the concepts of “Servant Leadership” and “Level 5 Leadership”.

Let me explain this concept further by using Option Theory. Being a Liberal is about your rights. You believe that as a taxpayer you have paid a premium and therefore have a call option, that is, a right to pursue your economic and emotional goals without any obligation. On the other hand, being Dharmic means you are writing a put option; that is, you will deliver your duty and serve your nation or the world when required but without collecting any premium. For a Dharmic, the gift of a fulfilled life itself is deemed to be the premium.

Dharma is a difficult concept to define in English. Since the same word can have multiple meanings based on the context, it is best we use the word dharma itself and call it Dharmic Liberalism.

Is Dharmic Liberalism the Indian version of the US Conservative Right?

Not at all. On the contrary, it is a form of Liberalism that promotes the right to pursue the freedom of thought and expression, security and emotional happiness within the universal framework of dharma.

It may be pointed out here that Sanatana Dharma is not a dogma but it is dynamic, contextual, and therefore, flexible. One is not constrained by the tradition or the scriptures to react to present day situations. Therefore, it is not a conservative thought as defined in the western political framework, where their scripture dictates the social ethics that a believer has to adhere to.

The beauty of Sanatana Dharma is the diversity of opinion that is possible. From the same shruti, six rishis have come up with their own interpretations in the form of six darshanas.

Since they are all named after a specific rishi (unlike the Vedas which are shruti), it is obvious that they have come out of a gurukul and launched their own school of thought. Is that not freedom to think for yourself? To evolve your own thought freely and without any restraint? This is the essence of Sanatana Dharma: non-dogmatic and allowing each individual to be a seeker.

You have defined it as “classical and social liberalism plus”. Can you elaborate what is that “plus”?

This “plus” is rooted at many levels. In the context of Liberalism, typically there is no mention of duties and responsibilities from an individual. Liberalism connotes to one a sense of entitlement. In Dharmic Liberalism, individuals are expected to perform their duties. Let me present a chart explaining this.

To understand Individual Dharma, one can go back to the Vedantic concept of purusharthas which was conceptualised at an early stage of human civilization when there was no king, no government. Here I would like to paraphrase from the teachings of Pujya Swami Dayanand Saraswati.

Pursuit of happiness can be categorised under four main headings, collectively known in our scriptures as “four purusharthas”. These are:

All individuals have a choice over both the end and the means and they have to conform to certain values. These values can be derived by observing how one wants others to behave with reference to oneself. They are based on how one wants oneself to be treated. In other words, the end and the means must be based on the golden rule of reciprocity. These values are part of common sense ethics, and are collectively called dharma. These values apply to irreligious persons too. Therefore dharma occupies the foremost part among the four categories of human goals because pursuit of artha and kama have to be governed by ethical standards.

From Individual Dharma, let’s now turn to State Dharma and its relationship with the individual.

As a citizen of India, I am deemed to have signed a contract with the State—our Constitution. What is that contract? Does it resonate with my values? What are the principles of that contract?

The preamble to the Indian Constitution talks about four key values: Liberty, Justice, Equality and Fraternity. There are several articles in the Constitution that I may not necessarily agree with. But they are comparatively less important at this stage. We want to restrict our evaluation to the first principles.

Apart from these four values, do we want any other values? To my mind, these four are fulfilling and all-encompassing. Therefore no additional values are required to express Dharmic Liberalism. The first three are definitely part of Liberalism as we understand today. So far as fraternity is concerned, it is a sense of belonging to the country and protecting the integrity and security of the country. Therefore an individual following Dharmic Liberalism has a duty to his country.

He must serve and protect his country.

Let’s look at the universal issues beyond the nation-state. Every individual owns a duty to protect Sanatana Dharma, the Universal Order. What disturbs this order? Violence and damage to the environment. So a Dharmic Liberal has a duty to promote global peace, respond to natural disasters and also protect the environment. He can do this in his own limited, individual way.

Lastly as an individual, I must offer my respect to our past and traditional thoughts. If I am readily respecting the past scientific thought, I should not exclude the traditional social and cultural thought. We should never dismiss our past traditional social thought merely because of its ancientness. Again, the beauty of Sanatana Dharma is its non-dogmatic and non-exclusivist way of life. This option is not available to people who follow other theologies, forcing them to take a view which may personally not resonate with them in the current context. Such flexibility in the Indic way of life in itself should make us respect our traditional thought, examine its relevance to the current context and decide for ourselves whether to accept it or not.

Actually if you look back at the concept of “Pancha Yajna” that includes Brahma-yajna, Deva-yajna, Pitru-yajna, Manushya-yajna and Bhuta-yajna, you will find a very useful parallel. Brahma-yajna is about respecting traditional thought, Bhuta-yajna is about caring for the environment. Peace and assisting people in natural disaster is called Manushya-yajna. The other two yagnas, Deva-yajna and Pitru-yajna are about honouring one’s own God and ancestors. They belong to the personal domain of an individual.

You can find the environmentally conscious people in say California, who are careful about their carbon footprint, eat organic food, wear cotton clothes and drive electric cars or cycle to their workplace, are actually doing Bhuta-yajna! Only they do not call it by that name. They have made it part of their lifestyle and way of life, which is exactly what Sanatana Dharma is all about.

What is the role of Moksha in your framework of Dharmic Liberalism?

For the individual, a dharmic pursuit of material security and sensory pleasure comes as a primary requirement. At the secondary stage, when he realises that external objects, people or situations only give him temporary happiness, he turns to the pursuit of spiritual happiness and that is moksha.

From a political ideology point of view, moksha is not relevant here.

What is the role of government under Dharmic Liberalism?

Here I would like to recall the mission statement of Swarajya when the magazine was launched. Rajaji had this to say :

“There is before the country the great problem of how to secure welfare without surrendering the individual to be swallowed up by the State, how to get the best return for the taxes the people pay and how to preserve spiritual values while working for better material standards of life. This journal will serve all these purposes.”

In this one statement, Rajaji has packed in his entire political ideology. If you read carefully the highlighted portions, “securing welfare” is ensuring equality of opportunity and justice for all; “without surrendering the individual to be swallowed by the State” and better “material standards” is ensuring his liberty to pursue his economic goals; “best return for taxes” defines an efficient government, what is now called as “minimum government maximum governance”, and lastly “how to preserve spiritual values” is a power-packed non-religious phrase communicating the duty of an individual to surrender, respect, and protect the larger cosmic force or order which is Sanatana Dharma.

So he covers social and economic policies the government has to pursue, and rights and duties for an individual in pursuit of his goals. This is nothing but Classical Liberalism-Social Liberalism Plus—Dharmic Liberalism.

On a different note, if you see the trends being published by Pew Research, a significant portion of the American population identify themselves as “spiritual but not religious”. As I mentioned before, they are increasingly concerned about universal issues such as peace, environment and reverting to traditional knowledge systems. So on one hand, they have reached the height of material prosperity through their individual efforts, but on the other hand they are emotionally unfulfilled and are turning to spirituality and are being sensitive to universal issues. In a way, they are “Spiritually Liberal”, which is nothing but being a “Dharmic Liberal”.

(Hari Kiran Vadlamani is a board member of Kovai Media Pvt Ltd, the publishers of Swarajya.)

Dr Kaushik Gangopadhyay is Associate Professor of Economics at IIM-Kozhikode
Get Swarajya in your inbox everyday. Subscribe here.
Tags: