A Novel By Any Other Name 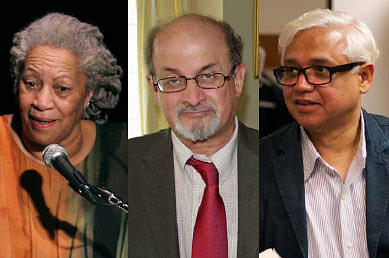 As celebrated writers jostle with aspiring ones, will 2015 change the way the novel is read or written?

If you are a novel enthusiast, especially the serious, literary kind, 2015 might prove to be a good year for you. The year has barely begun, but already we are informed, rather inundated, with news of the literary who’s who putting finishing touches to their books, any number or all of which may soon come and claim space on your desks and shelves.

At 83, Nobel Laureate American writer Toni Morrison will be publishing her eleventh novel, God Help the Child. Kazuo Ishiguro, the British novelist of Japanese origin, is out with The Buried Giant and it’s been 10 years since he wrote his last one. After seven years, Salman Rushdie will be returning with a novel; his Two Years Eight Months and Twenty-Eight Nights (to get the meaning of the title, add up the numbers; no leap year, and when counting the days of the month, begin from January) is expected this September. Milan Kundera, the Czech writer in self-exile in Paris, returns with his novel, The Festival of Insignificance, after 13 years.

This is an illustrious list, by any yardstick. For a while, it almost makes you forget that 2015 will also be the year that Amitav Ghosh completes his Ibis trilogy, or that the discovery of a hitherto unknown manuscript among Harper Lee’s papers means To Kill A Mockingbird will finally get a sequel. Nor does such a rich constellation in the literary firmament mean the year’s most inspired, aesthetically pleasing or intellectually challenging novel will be one among these. In fact, it is quite likely that every one of these books will just be an addition to the respective writer’s oeuvre. Morrison and Kundera are now in the twilight of their careers, and every one of those mentioned above carry the intellectual heft that arrives once a career has been hammered and shaped over decades by recognition, fame and notoriety, and not exactly in that order. The possibility that their latest works will affect how people read novels or usher in a new approach to writing them is dim.

What, then, is the necessity of dwelling on (and fawning over) what is the writing world’s equivalent of A-list celebrities? Well, for one, it shows that in spite of long and frequent dirges routinely sung for the death of the novel, the medium is alive and thriving. Even as wet-behind-the-ears aspiring novelists, fresh out of creative writing courses, take to the medium with gusto, the icons they worship or would secretly like to vanquish are also planning to stick around, and give everybody a run for their money.

When the seasoned and the novice, the veteran and the uninitiated joust in the battlefield for eminence, it seems safe to assume that the novel isn’t in its death throes, gasping for breath. Rather, the debate about its possible demise becomes nothing more than a “theoretical discussion of (its) declining importance”, as the Wikipedia entry describes it in all its reductive simplicity. At different periods in time, the novel, it was feared, would be killed by the radio, the movies, television, and much later the internet. It survived, managing to evolve and adapt to the changing times.

Now that we have established that the field of novel writing is teeming with practitioners, what kind of novels will the year 2015 offer? A novel, by its very nomenclature, is supposed to provide something that is unique, a work of art that is not everyday, something that makes its mark by its sheer “novelty” value. If one were to ascribe such a stiff, exacting definition, very few works, past as well as present, would make the grade. Every year, and so it goes on, we read countless works, across countries and continents, dwelling on “the human condition”; we come across immaculately chiselled sentences in prose that tell stories of love and longing, betrayal and intrigue, grief and heartbreak, and are none the wiser for it.

As Kundera himself had noted in his non-fiction work Testaments Betrayed, “most novels produced today stand outside the history of the novel…that say nothing new, have no aesthetic ambition, bring no change to our understanding of man or to novelistic form, are each one like the next, are completely consumable in the morning and completely discardable in the afternoon”. He offers the way out too, pointing out who or what would be the worthy inheritor of the heavy mantle of Cervantes and Rabelais. A novel is the realm where moral judgment is suspended, one that stands “against the ineradicable human habit of judging instantly, ceaselessly, and everyone”. In other words, within the novel’s universe, there is no good or bad, right or wrong, and it is this framework which teaches the reader to be curious about (and understanding of) others who might not be cast in the same lot as she is. That apparent illogic is the only logic behind writing a novel.

If one sets the bar there, the field of novel writing does not remotely look as promising, no matter how many eager writers strut about on it. As any follower of the free speech debate would be aware, challenging prevailing morality and assumptions is today a matter of tremendous courage, intellectual as well as physical. Creative writing courses, across the world, are designed such that one’s work is judged by a close circle of peers and a mentor teaching that course. Writers, streaming out from the assembly line of such courses, are already mindful of what others might say, and experts in sidestepping harsh, discordant opinions.

The established writers are likely to take more chances, but even the most seasoned among them know that once controversy takes over, it acquires a life of its own, far removed from the art. In Testaments Betrayed, Kundera discusses the controversy around Rushdie’s The Satanic Verses, saying: “Of course, no one any longer doubted that Rushdie actually had attacked (emphasis his) Islam, for only the accusation was real; the text of the book no longer mattered, it no longer existed.”

In This Is Not The End Of The Book, writers Umberto Eco and Jean-Claude Carrière arrive at what they think is one of the enabling reasons for a great book to be written. Eco says, among other things, that “a country must have endured the great events of history if it is to produce a mind capable of thinking in a universal way”. They go further, adding that what is also needed is what we call an “enabling environment”—that the mind must know what it is capable of and allowed to write what it wants. What is true of the book (any written work) is also true of the novel. Till such time as a writer is able to give free rein to that imagination, any number of novels can be written, but hardly any worth the name. 2015 is unlikely to be an exception to that rule.