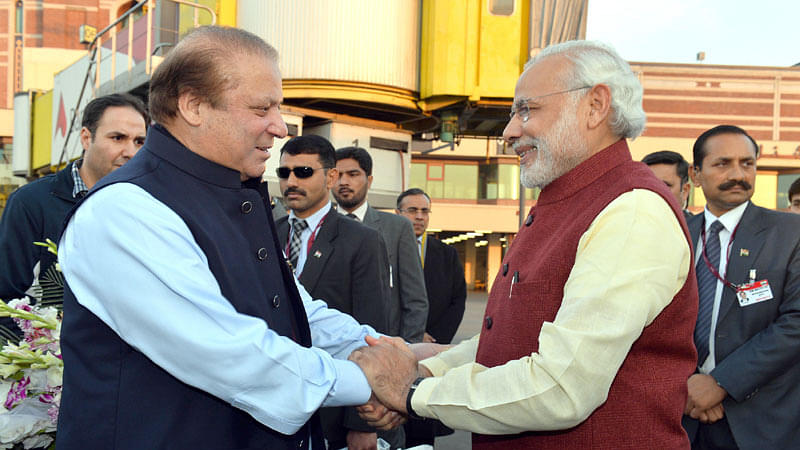 The creation of Pakistan was premised on two fundamental fallacies. The first one, openly stated, was famously known as the “two-nation theory”. It held that sub-continental Muslims were a separate nation. But Muslims are not a nation. They constitute a religious, social, and cultural community that does not take too kindly to national boundaries.

The two-nation theory failed within 25 years of Pakistan’s creation with the birth of Bangladesh in 1971.The other unstated but perhaps even more flagrant fallacy was that the principle reason for Pakistan’s existence was its hatred of India and Hindus. This inveterate animosity, even contempt, was demonstrated soon after the Partition. The Pakistan army sent mercenaries and irregulars across the still fluid border to invade Kashmir, trying to wrest it from India. In the occupied towns, there was much looting and killing; many of the “captured” Hindu women were sold in the brothels of Rawalpindi.

Alarmed by the invasion, the last Maharaja of Kashmir, Hari Singh, asked for India’s help to save his state, signing the treaty of accession. This was a legal and binding act, of which the Pakistani state is in perpetual denial. Gandhi himself advised Nehru to airlift Indian troops to defend Kashmir. Though the Pakistani assault was foiled and pushed back to the present LoC, hating India and the Hindus has become a way of life for the Pakistani state. The latter itself, soon after, was hijacked by the army, which remains deeply invested in this false and pernicious doctrine.

Yet, by now it should be quite clear that just hating another country cannot be sufficient grounds to justify one’s own existence. After that partial defeat in Kashmir, Pakistan has been beaten over and over again in its attempts to destroy India. The three official wars, the last one resulting in the recapture of Kargil, proved India’s superiority. Earlier, in the creation of Bangladesh, a decisive body blow was dealt to Pakistan’s pretentions of parity with India.

What is not as clearly recognised is that one of India’s greatest achievements has also been to foil Pakistan’s bid to promote the Khalistan movement by fomenting the Sikh revolt and separation from India. But, perhaps an even greater if obvious triumph has nothing to do Pakistan. It is India’s political, economic, cultural, and ethical superiority, both as a state and as a society. The failure of Pakistan reverberates throughout the Indian subcontinent and beyond, especially among the Muslims. Pakistan has ceased to be the model, even an option.

Muslims in India, albeit reluctantly, have come to accept that their future lies as a part of the Indian narrative. They can thrive as equal or subordinate partners in such a narrative, equal if they participate as secular constituents, subordinate if they chose a separate religious identity than the equal civic one.

India must do all it can to drive home the advantages of such a partnership, even to the people of Pakistan, who don’t really hate India or Hindus with the same intensity as their army does. The former need to be shown repeatedly that the deep state, which is the army and its agents, whether the ISI or extra-state terrorist groups, do not serve their best interests. The deep state of Pakistan exists only for itself, does not consider itself answerable to the people of Pakistan, and misleads them with India-hatred as its primary plank of state policy

It is time for India to openly articulate a new Pakistan policy. Rather than parroting the pious platitude that a stable Pakistan is in India’s best interests, we must acknowledge its unlikelihood. Pakistan cannot be stable because it is based on the two fundamental fallacies already outlined above. Moreover, its deep state is not interested in the welfare of its people as much as in its own survival. As such, it cannot be expected to behave in any other fashion except to keep up its never-ending war with India. We must recognise that we have a poisonous snake in our own backyard, which if we do not crush, will bite us again and again, eventually killing us.

India’s stated policy should therefore be to weaken, break, divide, and destroy Pakistan. But we must do this without ill-will or hatred, only with the supreme self-confidence in our mission to bring peace and prosperity to the subcontinent. Nor do we need to invest too much of our resources in such a project. Like a pack of cards, Pakistan is fated to collapse under the weight of its own contradictions. India’s job is to magnify the latter, using every opportunity—military, economic, and diplomatic—to show up the conflict of interest between the people of Pakistan and the army-controlled state, which uses India-hatred to bolster its own hold on the reins of power.

The oppressed people of Pakistan, in the long run, are bound to appreciate India’s efforts because they will find freedom from their oppressive regime and some possibility of genuine self-determination. The end of Pakistan will also be conducive to peace and prosperity in the subcontinent. To begin with, that would be the only way to remove the scourge of terrorism from our region.

It is not that we Indians are inherently superior; rather we are the very same people. But India’s national narrative, based on pluralism, democracy, and the welfare of the people is markedly better, nobler, more viable. And most versions of Hinduism, with all their faults, still present a better social and soteriological manifestation of human culture than fanatical or jihadi Islam. That is why the other sub-continental citizens would like to join us rather than Pakistan. They see their own future in terms of India’s rather than Pakistan’s trajectory of development.

In the first 25 years of its existence, Pakistan broke into two. What will happen to it in the next 25? Frankly, the chances of its survival seem rather dim. The people of Pakistan, its worst victims, should be our natural allies in our fight against this rogue state. So also, the people in the rest of the subcontinent should breathe a sigh of relief when the epicentre of terrorism and violence is vapourised from our midst.

The message that India must therefore send out forcefully, albeit respectfully, is that there can be only one hegemon in the subcontinent. India is a success story; Pakistan is not only a bad idea, but a dangerous and abysmal failure. Having borne the brunt of its misdemeanours for 70 years, it is our duty to show its villainous face to the world. Slowly, but surely, we must prepare not just the people of Pakistan, but the world, for its eventual demise.