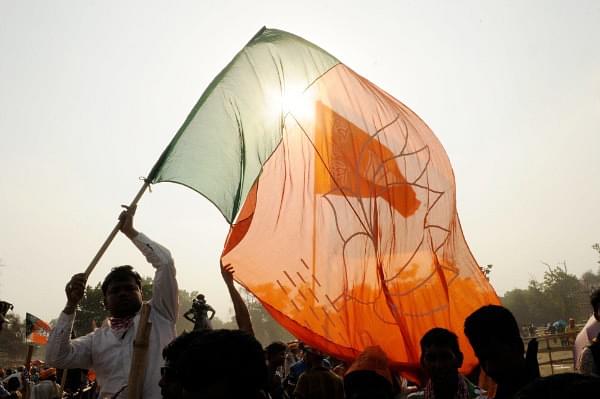 The inability of conservativism to announce itself in maxims, formulae or aims isn’t evidence of any intellectual shortcoming, says a noted Western philosopher.

Every ideological movement worth its name feels the need to trace its roots and map the ideological underpinnings in the context of history. In this context, Dr Swapan Dasgupta’s Awakening Bharat Mata: The Political Beliefs of Indian Right is a ground-breaking effort for its meticulous mapping of the ideological roots of the Indian Right, as well as for providing context to many of the issues at the forefront of the discourse today.

In the opening section, the author uses Narendra Modi’s spectacular electoral victory in 2014 as the starting point and then follows the roots of motherland, religion and community during the British Raj. This section is closed with a brief discussion on the changing political narrative in post 2014 India. Nobody is more aware of the inherent limitations of the Right-Left binary in Indian context than Swapan da, but instead of allowing the debate to be weighed down by semantics, he skilfully weaves the narrative thread in such a way that the points of convergence as well as divergence between Indian and Western Right are highlighted.

This is useful since we are not stuck with inventing the wheel at all times. For instance, while discussing the right wing’s lack of a doctrinaire maxim, he quotes philosopher Roger Scruton — “The inability of conservativism to announce itself in maxims, formulae or aims wasn’t evidence of any intellectual shortcoming. It stemmed from an awareness of the complexity of human things, and from an attachment to the values which cannot be understood with the abstract clarity of utopian theory.”

That this lack of dogma provides the right with its innate humanity is very relevant in today’s context.

While the religious and spiritual underpinnings of leaders like Mahatma Gandhi are well documented, very little is written and discussed about the strength religion offered to the masses during the independence struggle. Swapan da addresses this shortcoming. As historian William Gould wrote: “in the building of a mass movement, religion helped to provide the necessary framework, space, discipline and mobilization and in the process the political meaning of ‘Hinduism’ was redefined as an idea.”

Partha Chatterjee, writing about peasant agitations of Bengal after 1926, echoes: “it is a hardly surprising discovery that the ideology which shaped and gave meaning to the various collective acts of the peasantry was fundamentally religious.” Thinkers as diverse as Bankim Chandra Chatterjee and Swami Vivekananda believed in the centrality of religion for reinvigorating India. In this light, perhaps C Rajagopalachari summed it the best when he said: “loosening of religious impulse is the worst of the disservice rendered by the Congress to the nation”.

In the third section of the first part, the author discusses politics and the Hindu narrative, especially in post-independence India. Veer Savarkar insisted that Hindu Mahasabha goes beyond being a religious body and identify itself with the national life of ‘Hindudom’ in economic, social, cultural and political aspects of its life. Dr Syama Prasad Mookerjee believed that middle class liberalism was compatible with Hindu traditionalism. Thus cultural nationalism was the bedrock upon which Hinduism began its post-independence journey. The opposition was provided by the highly anglicised metropolitan elite for whom, to quote historian Mukul Kesavan, secularism was a “style choice” and “a marker of good taste and modernity”. That secularism is alien to Indian way of thinking isn’t a right wing view alone either.

Sociologist T N Madan asserted that “secularism is the dream of a minority which wants to shape majority in its own image.” Even Pritish Nandy, certainly no friend of the Bharatiya Janata Party or the Indian Right, had said that the idea of secularism was borrowed from the West.

In the section marked “Reading”, Swapan da has curated a collection of writings from eminent thinkers on issues of nation building, history and faultlines. While names such as Sitaram Goel, Jadunath Sarkar, R G Bhandarkar and Atal Bihari Vajpayee scarcely need introduction, some common threads that emerge from this collection of writings bear mentioning.

From speeches given by Justice Mahadev Govind Ranade and R G Bhandarkar to writings of Sri Aurobindo and Bhagini Nivedita, the self-reformist bias of the Indian conservative movement is clearly visible. This is an important line to redraw as the post-independence Marxist reading of history has projected the Hindu Right as inherently regressive. From widow remarriage to eradicating caste prejudice, Right-leaning thinkers were advocating social reforms as far back as the nineteenth century.

The section on history analyses the strategic as well as political genius of King Shivaji. It also has essays on what it means to integrate Indian culture in modern education, and the immense disservice done by the Left-leaning historians in writing the history of India based on their prejudices and political narratives rather than facts.

The most painful and yet revealing section is the one dealing with faultlines. In it, parliamentarian N C Chatterjee, opposing the Hindu marriage bill in the house, lays bare how the Nehruvian idea of false secularism was used to discriminate against Hindus and Hindu customs. We also read how the president of Hindu Mahasabha advocated welcoming Hindus back in their religion, removal of untouchability as well as physical training for all Hindus.

During a fiery debate in Parliament in 1970 against the backdrop of Bhiwandi riots, we read prime minister Indira Gandhi referring to Atal Bihari Vajpayee as “old Hitler style”. Strangely, the fact that Vajpayee went on to represent his party for nearly four decades without doing anything remotely Hitler style, while Indira Gandhi plunged the country into the dictatorial abyss of Emergency five years later, should help put the present day ‘rise of fascism’ rhetoric from the Left, in perspective.

In the same section, V S Naipaul’s interview puts the aspirational Indian Right in its appropriate cultural context while Girilal Jain’s essay explains how the failure of Nehruvian socialism is inextricably linked with the Hindu recovery.

The final essay by S Gurumurthy articulates an important concept of Hindusim as a kinetic expression of Hindu dharma. The concept is explained with such precision that this reviewer feels it best to leave the readers to read it by themselves.

Academician John Henrik Clarke once referred to history as “a compass people use to find themselves on the map of human geography. It tells them where they are, but most importantly, what they must be.” In the context of Indian Right finding themselves on the map of human geography, Awakening Bharat Mata is a significant effort. It benefits immensely from Swapan Dasgupta’s skills both as a writer and a curator of thoughts. This should be compulsory reading for anyone who identifies with or is even interested in the movement.