Yogi Adityanath Wants To Take The ‘Expressway’ To Power, In 2022 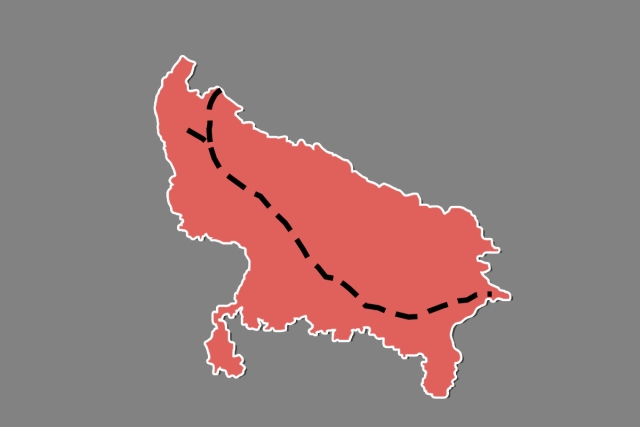 As Yogi Adityanath moves towards the first half of his tenure, he is already paving the way for his second stint in office.

Kamlesh Kumar Dhuriya has been selling laiya chana outside Prayagraj’s Motilal Nehru National Institute of Technology (MNIT) for over a decade.

“Just a few years back, there used to be a traffic jam here everyday from 4 PM to 9 PM. If an ambulance got stuck here, there was no hope of it reaching the hospital in time. People died on the way. Since the day this road has been widened, there has not been any traffic jam here,” Dhuriya said, with Manoj Kumar, a temporary employee of MNIT, nodding in approval.

Dhuriya’s and Kumar’s comments came as no surprise. As this correspondent crisscrossed Purvanchal — the eastern part of Uttar Pradesh — during the Lok Sabha elections, the state government’s road infrastructure push was clearly visible, and its effect palpable, as many echoed similar sentiments.

“Were roads in the state ever this good,” said Gangesh Gond, who runs a transportation business in Phulpur’s Indian Farmers Fertilizer Cooperative mandi. Gond was referring to State Highway 7 that links Prayagraj and Gorakhpur.

Nearly 250 km away, in Gorakhpur’s Campierganj, Phool Chand Nishad, who works in the construction sector in the Gulf, said, “The speed of development in this region has doubled. You can see new roads being constructed wherever you look.”

It was clear that this sentiment was translating into votes, as these men had told this correspondent in the first week of May this year that they were supporting the BJP. Of course, better roads may not have been the only reason why they were choosing the BJP over others, but it was definitely one of the important ones.

Six months later, it is more apparent than ever that Chief Minister Yogi Adityanath knows his infrastructure push has worked, and he appears to be doubling down on it.

In November, his cabinet cleared the decks for two road projects, the 296-km long Bundelkhand Expressway and 91-km Gorakhpur Link Expressway, even as work continues in full swing on the 340-km long Purvanchal Expressway.

Apart from the two approved and one under-construction expressways, the state also plans to build a 1,020-km long expressway along the Ganga. The nodal agency for these projects, Uttar Pradesh Expressways Industrial Development Authority (UPEIDA), is also working on many more proposals.

Understandably, the state government believes it can project expressways as one of its achievements in 2022 when Adityanath seeks re-election after five years in office. In a meeting in July this year, just days after the Lok Sabha elections, Adityanath brought forward the deadline for the Purvanchal expressway to 2020.

The Purvanchal Expressway originates near Chand Saray in Lucknow on the National Highway 731 (Lucknow-Sultanpur road). It will pass through seven districts — Barabanki, Amethi, Sultanpur, Ayodhya, Ambedkarnagar, Azamgarh and Mau — which lies on the border with Bihar, linking them to the state capital.

Lucknow, in turn, is linked to Delhi through the Lucknow-Agra Expressway and Yamuna (Agra-Greater Noida) Expressway. Therefore, this would make for seamless connectivity from the eastern part of Uttar Pradesh, right from the border with Bihar, to the National Capital Region.

Mooted and passed under the Samajwadi Party regime, the project hasn’t fallen off the radar under the BJP government. If anything, Adityanath appears to have made this a priority — Gorakhpur, the seat of the Gorakhnath Peeth which he continues to head as Mahant, is in eastern Uttar Pradesh.

He has represented Gorakhpur in Parliament five times in a row between 1998 and 2014. Consequently, both his spiritual influence and political power are concentrated in this part of the state.

There was some delay initially, though. When the Adityanath government took office, it found that the bids received in response to the tenders put out by the Akhilesh Yadav-led Samajwadi Party government were overpriced.

These bids were cancelled in June 2018 as the government decided to go for fresh bidding. New bids were invited for the expressway and contracts were swiftly awarded in July 2018.

As a result, the government saved hundreds of crores of rupees in construction costs.

The approximate cost of the civil works of the project, which was Rs 11,836 crore initially, has now come down to Rs 11,216 crore.

The original bids, UPEIDA says, were overpriced because companies “joined hands and worked as a cartel”.

So far, around 98 per cent of the land required for the expressway has been acquired. At least 97 per cent of clearing and grubbing work, which involves the removal of vegetation, demolition of existing structures, and clearing of surface debris and litter at the site, has been completed.

Around 58 per cent of earth work, which includes levelling of land for construction, is also complete.

With much of land acquisition, grubbing, clearing and earthwork complete, and the process of blacktopping in full swing, UPEIDA officials say the main carriageway of the Purvanchal expressway will be completed in time, that is in 2020, and are confident of opening it to traffic around Diwali the same year.

“The main carriageway of the Purvanchal expressway will be completed in the second half of 2020. That’s when we will start trials on the carriageway. After the trials are complete, we will open the main carriageway to traffic by Diwali 2020,” Awanish Awasthi, Additional Chief Secretary of Uttar Pradesh government and Chief Executive Officer of UPEIDA, told Swarajya in November.

“With the main carriageway open for traffic, we will finish the remaining work on the expressway by April 2021,” Awasthi said, adding that “the normal timeline for the completion of the project is 36 months, the optimistic timeline is 30 months, and we are trying to finish the work just under 30 months”.

Plans are also afloat to extend the expressway to Balia, the state’s easternmost district. This extension will add another 50 to 60-odd kilometres to the expressway. But the government’s focus, right now, is on another extension — Gorakhpur Link Expressway.

The 91-km long expressway, as its name suggests, will link Gorakhpur, the home-turf of the chief minister, to the Purvanchal Expressway, passing through three districts — Kabir Nagar, Ambedkar Nagar and Azamgarh.

In November, financial bids for the Gorakhpur Link Expressway were approved by the cabinet, along with those invited for the Bundelkhand Expressway.

The 296-km long Bundelkhand Expressway will link Chitrakoot with the Agra-Lucknow expressway near Etawah, passing through Banda, Hamirpur, Jalaun and Auraiya districts, providing the region improved connectivity to NCR through the Lucknow-Agra Expressway and the Yamuna Expressway.

The region is electorally important for the BJP — of the 19 Vidhan Sabha seats in the seven districts that for Uttar Pradesh’s part of Bundelkhand, the party had won all 19 in 2017.

In the 2019 Lok Sabha polls, the party had won all the four seats in the region, repeating its performance of the 2014 polls.

This connectivity is also critical for the Defence Industrial Corridor being developed in this part of the state. The Bundelkhand Expressway, along with the two operational expressways in the state, will improve connectivity between the six nodes of the corridor — Jhansi, Chitrakoot, Agra, Lucknow, Kanpur and Aligarh.

UPEIDA, also the nodal agency for the defence corridor, is acquiring land around the nodes to use it as a ‘land bank’. In the first phase, the agency has to acquire around 5,000 hectares, of which 85 per cent work has been completed.

UPEIDA says work on the former will begin before the end of this year and on the latter in the early months of the next year.

“Work on the Bundelkhand Expressway will begin in December itself, and we plan to start working on Gorakhpur Link Expressway in early 2020,” Awasthi told Swarajya.

Sources at UPEIDA said Prime Minister Narendra Modi is likely to lay the foundation of the expressway in mid-December this year.

"We want to finish work on the Bundelkhand Expressway by the end of 2021 or, maximum, in the early months of 2022,” Awasthi added.

2022 is when UP goes to polls next. The significance of infrastructure development in general, and expressways in particular, in Yogi’s reelection plan, is clear.