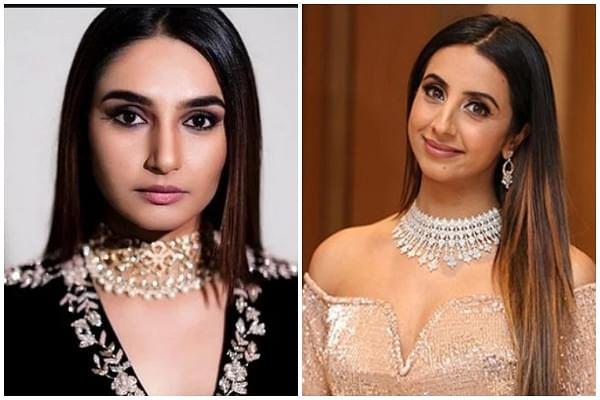 Sandalwood actors Ragini Dwivedi (L) and Sanjjanaa Galrani (R) have been arrested in the case.

The drugs issue in the Indian film industry seems to be a deep-rooted one. First Bollywood, then the Malayalam film industry and now the Kannada film industry has brought to fore the malady of drugs use.

What began as a probe into the death of Hindi film actor Sushant Singh Rajput is now turning to be a country-wide probe, focussing particularly on the film industry.

The Narcotics Control Bureau (NCB) swung into action in Rajput’s case that has now led them deep south on this malaise.

But for the NCB arresting three persons, two of them belonging to Kerala, in connection with drugs trafficking, this would not have come to light.

It all began with the arrest of Mohammed Anoop, the mastermind of the drug racket in Bengaluru who has been in this for over seven years, Rijesh Raveendran — both from Kerala — and Kannada television serial actor D Anikha.

The NCB followed up these arrests with search operations leading to the recovery of ecstasy or MDMA pills and cash at various locations in Bengaluru.

Soon after this, Kannada filmmaker Indrajit Lankesh created a storm by alleging that a few actors in the industry were using drugs.

"The drug network in Sandalwood (Kannada film industry) is far and wide. Many young actors and actresses organise rave parties. I have heard many stories and also, I know of many such incidents," he said.

The Karnataka police summoned him to the Central Crime Branch (CCB) Anti-Narcotics Wing on 31 August to provide more information. It was there that he put the number of those involved in drugs use at 15.

The State police also issued a statement saying that its Bengaluru personnel have begun raids and search operations at the premises of alleged drug peddlers and detected drugs supplied through the Dark Net.

Last week, the CCB conducted search operations at the premises of actor Ragini Dwivedi and then questioned her on the important materials recovered from her place.

She was zeroed in on based on information provided by a Regional Transport Office staff, who had been arrested earlier last week.

Dwivedi was initially summoned by the CCB, but since she sent a lawyer instead of personally appearing before it, search operations were conducted.

Subsequently, she was arrested during the weekend.

A businessman was also arrested soon, leading to the arrest of another actor, Sanjjanaa Galrani yesterday (8 September).

Before that, the CCB laid its hands on a person, Loum Pepper Samba, hailing from Africa.

Samba was allegedly supplying drugs to celebrities in the Garden City.

The arrest also led to the detention of a New Delhi planner of parties in which celebrities took part.

According to CCB officials, the arrest of the planner, by a team which flew to Delhi, is a big catch since drugs are consumed at big parties.

Then, the CCB came up with its surprise arrest of Galrani, who had come under police radar after the arrest of the businessman.

Galrani was questioned reportedly on information gathered from another person, too, on 7 September.

So far, seven persons have been arrested in connection with drugs-peddling in the film industry.

Karnataka Deputy Chief Minister Ashwath Narayan said that there are many verticals in the drug peddling case and the B S Yeddyurappa government is determined to end the menace.

With the Opposition parties such as the Congress demanding action, the Kannada film industry is set to witness more such shocks.