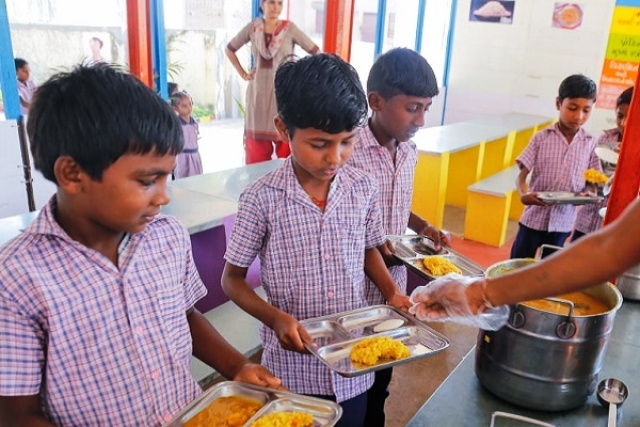 Akshaya Patra has been commissioned by the Tamil Nadu government to build centralised kitchens in Chennai to provide nutritional breakfast to students studying in corporation schools, New Indian Express has reported.

A check to the tune of Rs 5 crore was handed over to the foundation by Governor Banwarilal Purohit and Chief Minister Edappadi K Palaniswami.

The first centralised kitchen will be constructed in Greams Road with a built-up area of 20,000 square feet and will cater to 12,000 students. A Bhoomi Puja too was performed at the kitchen site. Another kitchen is slated to come up in Perambur Barracks Road which will help serve breakfast to 15,000 students.

While speaking at the occasion, Chief Minister Palaniswami said that he knows the importance of a nutritional breakfast.

“As a child, I couldn’t afford to have healthy food and the neighbours used to help provide healthy food”, Paliniswami was quoted as saying.

The foundation currently serves breakfast to around 5,000 city school students.

Akshaya Patra is well known for providing mid day meals to school children and it has served over 3 billion meals all over India since its foundation in 2000. Currently, the organisation conceptualised by ISKCON founder, A C Bhaktivedanta Swami Prabhupada helps feed over 17 lakh school children.

The foundation strives to eliminate hunger among school children while also combating malnutrition.

Akshaya Patra bagged the Gandhi Peace Prize in 2016, and runs the world's largest NGO-run mid-day meal programme, working across 12 states in India. It completed its one-billionth meal in 2012, two-billionth in 2016 and three-billionth in 2019.

It recently came under attack from certain activists and the Karnataka State Food Commission on charges of violating the state nutritional criteria by not including onions in its meal. Akshaya Patra is known for providing a sattvic meal which excludes the use of onion and garlic.

Following the outrage, the National Institute of Nutrition (NIN) reiterated that Akshaya Patra’s meals meet the required nutritional norms mandated by the HRD Ministry. It was later officially exempted by the Karnataka government from including onion.