As Elites And Islamist Oppose CAA, Listen To Persecuted Hindu Refugees And How Much The Act Matters To Them 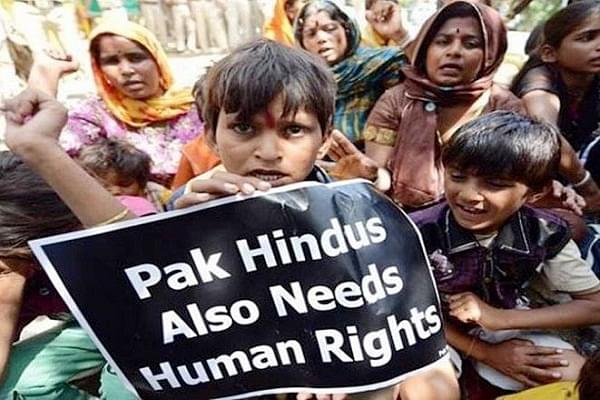 Ever since the Citizenship Amendment Act was enacted by the President of India after its passage in the Indian Parliament, protests including many violent ones have erupted in various parts of the country.

Incidentally, two sets of groups namely the - so called elites including Bollywood actors and the Islamists have emerged as prominent protesters against this act. They have been countered by many Indians who have since then taken to the streets in support of the act.

While, the so called elites and Islamists have hogged the media limelight and in the process exposed their ignorance in the matter, the persecuted Hindu refugees - a key beneficiary of the act have failed to garner such mainstream attention.

This footage shows how much the CAA means to the real stakeholders in the matter who have taken refuge in India after fleeing institutionalised religious persecution.

"We could not step out due to the fear of getting abducted..we didn't go to school.." says Shashi Devi, a Hindu refugee woman.

She is very fond of studying & wants to become a doctor or a cop someday.

The 19-year-old girl named Srishthi Devi in the above video can be seen recounting her plight back in Pakistan about having being forced to stay at home and skip schools in the fear of being abducted.

India, she claims has been a completely different experience for her and she now hopes to resume her schooling. She added that she likes to study and hopes to either become a cop or a doctor someday. She also expressed joy over being able to get citizenship of her rightful country.

She wants to study in India and grow up to be a brave cop. The #CABBill is going to change the lives of many more ambitious girls like her.#RamlilaMaidan #CAA_NRC_Support pic.twitter.com/kcgr4326xd

In the above video a small girl who came with her family from Pakistan said how she likes it in India and wants to become a police officer when she grows up. Currently being taught by her mother, the girl now wants to start going to school.

Look at this young boy. His eyes gleamed up at the sight of Prime Minister @narendramodi

He is a Hindu refugee kid who came to India to seek asylum. He was denied access to education in Pakistan. He wants to study & grow up to be an officer.#RamlilaMaidan #CAA_NRC_support pic.twitter.com/ReaRrPWfiU

In this video for example a small boy reveals his dream of becoming an officer and also thanked Prime Minister Narendra Modi for helping clear his path towards Indian citizenship.

In Pakistan, Hindu women were abducted and/or teased on a regular basis. She now feels safe in India as an Indian citizen.#RamlilaMaidan #CAA_NRC_support pic.twitter.com/56Ji0bijh0

“This is our country, that (Pakistan) was not, we like it here very much. We pray to Prime Minister Modi that we now be made citizens”.

She also recounted the harassment meted out by Muslim boys and how the girls were afraid of going out in the fear of abduction. She too hopes to become a government doctor when she grows up.

We had earlier reported about the struggles of Bangladeshi and Pakistani Hindu refugees and what the CAA means to them. It should be noted that the refugees have struggled to find proper jobs and education in the absence of basic identification documents.