Explained: BJP MPs Attending Taiwan President’s Swearing-In Ceremony, A Jittery China And What Does It Mean 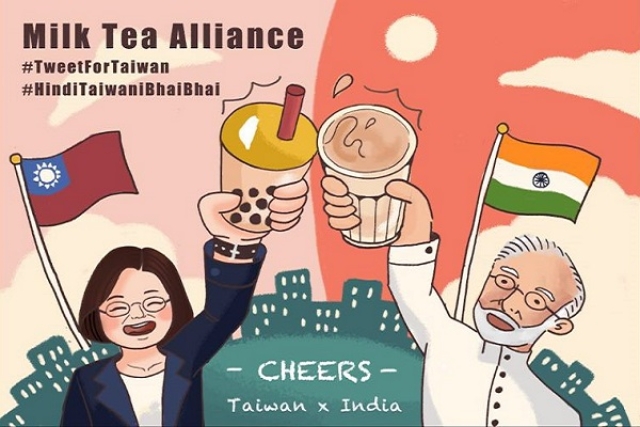 A poster shared by Digital Diplomacy Lab of Taiwan on 20 May 2020 (Source: @digidiploTaiwan/Twitter)

The two MPs were among the 92 dignitaries who attended the ceremony via internet, including US Secretary of State Mike Pompeo.

Liu Bing, counsellor (parliament) of the Chinese embassy in parliament registered a protest calling the congratulatory message of Indian MPs to President Tsai Ing-wen “utterly wrong” and against the ‘One China’ principle.

Just two days ago, on Sunday, China saw protest march in Hong Kong where thousands took to streets against the newly proposed law on national security. The police used tear gas bombs to disperse the crowd within an hour of the start of the protest.

China had sent a demarche to India and other countries, seeking support and understanding on the new law.

India and China are also witnessing an uptick in border skirmishes that experts attribute to Chinese response to India up-scaling its border infrastructure.

Indian MPs participation in the swearing-in ceremony of Taiwanese president comes a week after the Nepal Prime Minister KP Oli said that the virus from India “looks more lethal” than Chinese and Italian, accusing India for the spread of coronavirus cases in the country. The speech was seen as the mountainous country moving closer to China.

Oli became the prime minister after 2017 elections with support from Communist Party of Nepal (Maoist Centre).

Taiwan garnered limelight after the World Health Organisation (WHO) received flak globally for mishandling the pandemic, purportedly to shield China from criticism.

Taiwan despite being perhaps the only country that successfully controlled the virus without draconian measures, is still effectively locked out of membership in WHO due to Chinese pressure.

The issue exploded in March this year when a top WHO official avoided questions about Taiwan in a TV interview that went viral on social media. When the reporter pressed, he said, "Well, we've already talked about China."

Taiwan, a small island separated by the Taiwan strait from the mainland China, is officially the Republic of China.

The Kuomintang (Chinese Nationalist Party) leadership, after losing to the communists in the Chinese Civil War, retreated to the island of Taiwan.

As the Cold War was going on at the time, the United States offered its support to the ROC in Taiwan, saving it from being captured by the PRC.

The ROC had been a founding member of the UN and was one of the five permanent members of the Security Council.

But in 1971, as a fallout of the Sino-US rapprochement, Taiwan was expelled from the UN General Assembly, and PRC was admitted in its place.

While China has been pressurising the world community to support its ‘One China’ policy, Taiwan has appealed for its independent existence outside Chinese Communist Party’s rule.

The attendance of the members of Indian Parliament in the swearing-in ceremony of Tsai Ing-wen also assumes significance as President Tsai has been a vocal critic of China.

Last year, President Tsai called upon the PRC to democratise, respect human rights, and renounce the use of military force against Taiwan. She also called for international support to defend democracy in Taiwan against communist China’s aggression.

In response to Xi Jinping's call for reunification, Tsai said that the island would not accept a “one country, two systems” political arrangement with China, while stressing all cross-Strait negotiations needed to be carried out on a government-to-government basis.

In his letter, Bing described President Tsai as "the locally elected leader in China's Taiwan Province" and criticised her for not renouncing the goal of 'Taiwan Independence' and engaging in “separatist activities in one way or the other”.

Reportedly, India is also in talks with nations pushing for Taiwan membership in the WHO, sending signals that it might not continue to stick with ‘One China’ principle if China doesn’t reciprocate.