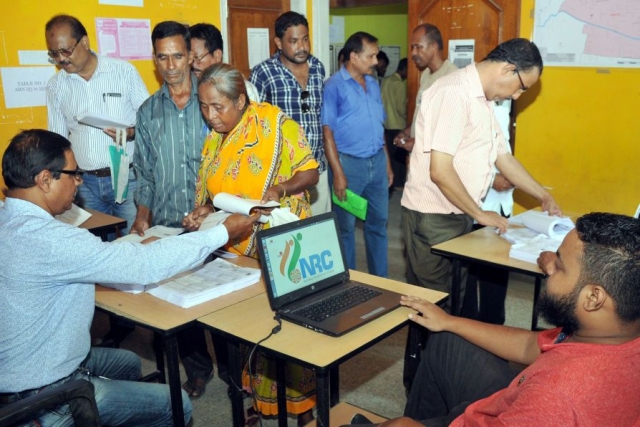 People check their name on the final draft list of Assam NRC list at NRC Seva Kendra at Hatigaon on July 30, 2018 in Guwahati (representative image) (Photo by Rajib Jyoti Sarma/Hindustan Times via GettyImages)

As a lot of confusion and misinformation prevails over the Citizenship Amendment Act (CAA) 2019 and the National Register of Citizens (NRC), here is a comprehensive explanation of both.

What Does Constitution Say About Citizenship?

The Constitution only deals with who would be considered a citizen on the date of the commencement of the Constitution (26 January 1950), and leaves the rest for the Parliament to decide.

It clearly states that the Parliament shall have the power to pass a law to make any provision with respect to all matters relating to citizenship (Article 11), and that the citizenship of a person is subject to such a law (Article 10).

Therefore, the government passed the Citizenship Act in 1955 which has since been amended multiple times.

How Can One Become A Citizen of India?

There are several ways.

By birth — This is for those who are born in India. Everyone born between 26 January 1950 and 1 July 1987 is automatically a citizen, even if the parents are illegal immigrants.

For those born between 1 July 1987 and 3 December 2004, at least one parent should be an Indian citizen at the time of birth, even if the other is an illegal immigrant.

For those born after 3 December 2004, at least one parent should be an Indian citizen and the other one shouldn’t be an illegal immigrant.

By descent — A person not born in India can still become an Indian citizen, if they have Indian ancestry.

For those born between 26 January 1950 and 10 December 1992, Indian citizenship is available if their father was an Indian citizen at the time of their birth.

For those born after 10 December 1992, citizenship is available if either of the parents is an Indian citizen at the time of birth.

From 3 December 2004, additionally, the birth has to be registered at an Indian consulate within one year, and parents have to give an undertaking that the child doesn’t hold the passport of another country.

Most Indians are citizens based on birth or descent.

Those who don’t qualify for the above can also become a citizen of India by registration, by fulfilling any one of the criteria, like being Indian-origin.

A person can also become a citizen by naturalisation — this has the broadest eligibility. There are no requirements of Indian descent, birth or Indian origination.

To become a naturalised citizen, a person must be residing in India throughout the 12 months preceding the application for citizenship.

Also, immediately before these 12 months, the person must be residing in India for a total of 11 out of 14 years.

The option of naturalisation or registration is not available to illegal immigrants.

For legal migrants, who want to apply for citizenship of India, all the rules are the same. There is no discrimination between Muslims and non-Muslims.

Muslims from Pakistan, Bangladesh, Afghanistan can also become Indian citizens through the legal ways, like everyone else.

On the other hand, illegal migrants are foreigners who enter India without a valid passport or travel document, or stay beyond the permitted time.

The Act states that Hindus, Sikhs, Buddhists, Jains, Parsis and Christians from Afghanistan, Bangladesh and Pakistan will not be treated as illegal migrants, and therefore, be eligible for naturalisation.

This exception has been provided as the above communities, facing religious persecution, were forced to cross the border to save their lives and dignity.

Also, under provisions for citizenship by naturalisation, they will have to fulfill the requirement of five years’ of residence in India, as opposed to 11 out of 14 years for others.

The Act exempts all north-east states except non-Tribal areas of Tripura and Assam. It has nothing to do with citizens of India, of any religion.

Substantial allegations were raised against the Congress party of deliberately going soft on illegal immigrants for vote-bank appeasement, despite the Assam Accord.

In 2005, Supreme Court struck down Congress’s Illegal Migrants (Determination by Tribunal) Act, 1983 as unconstitutional. The Act had failed to find out and deport illegal immigrants.

The background of Assam NRC - the 1951 NRC as well as the Assam Accord that promised its update, also also legacies of Congress.

Also, it was the Supreme Court that played an important role in the Assam NRC. It mandated the exercise in 2013, and closely monitored the process throughout.

Only after the Atal Bihari Vajpayee-led government, the law against the illegal immigrants was strengthened as it brought in the Citizenship Amendment Act (CAA) 2003.

The CAA 2003 also provides for a nation-wide National Register of Indian Citizens (NRIC), similar to the nation-wide NRC in 1951 conducted by the Nehru-led government.

It was the discussion on the CAA 2003 in Rajya Sabha in which Manmohan Singh had said that minorities in countries like Bangladesh have faced persecution and should be granted citizenship.

CAA 2003 was passed unanimously in Rajya Sabha,with the Congress party’s support. Also, the rules brought by the Vajpayee government, of providing citizenship to minority Hindus from Pakistan in Gujarat and Rajasthan, were extended by the succeeding UPA government.

There has been no change in the NRIC provisions since then. No fresh law on NRIC has been brought by the current government.

The amendment stated that the central government may compulsorily register every citizen of India and maintain a National Register of Indian Citizens (NRIC).

Following rules were made under the Act describing the procedure:

No Nation-wide NRC Till Now

The government has in the past promised a nation-wide NRC exercise — as already provided by the 2003 Act — but nothing regarding the actual exercise has been announced.

The government has reassured again and again that common documents will be accepted, and those unable to produce documents may produce witnesses or other proof supported by members of the community.

Any document that shows date of birth or place of birth, or both, will be sufficient.

The government has also repeatedly assured the people that no citizen of India will be excluded by the NRC exercise.

Why Protest Against CAA 2019

The protesters allege that if NRIC exercise is carried out, many from the marginalised sections are liable to be wrongfully excluded, and while the non-Muslims among them will have the path of naturalisation, Muslims will not.

CAA 2019 provides opportunity of naturalisation only to non-Muslims from Pakistan, Afghanistan and Bangladesh, not from India.

If Indian non-Muslims are excluded from NRIC, they would not benefit under CAA 2019, unless they can prove they came from PAB. This is not something that can be faked easily.

How will an excluded Indian non-Muslim — supposedly someone who is so marginalised that he can’t show any document from India where he lived all his life — can provide proof he came from Pakistan?

In fact, if one thinks about it, much before him, an illegal Bangladeshi Muslim immigrant can get fake citizenship documents in India — a phenomenon widely reported.

Both Muslim and non-Muslim citizens of India, who are excluded, will be treated equally. Even with NRIC +CAA, there is no discrimination between a Muslim and a non-Muslim Indian.

The key point to remember is that NRIC law, passed to sieve illegals from citizens — has been in place since 2003 — and treats Hindu and Muslim citizens the same.

There is no NRIC exercise as of now. If one fears wrongful exclusion, there is (and was before and after CAA 2003) plenty of time to engage with the government on NRIC and demand clarifications and make suggestions.

Those who have concerns about NRIC can discuss it without opposing CAA.

Holding hostage the lives of minority communities from PAB — who have suffered immensely — is not the right thing to do — especially in the backdrop of the long history of Hindu persecution, and a continuous thread of Hindu hatred, from Muslim invasions, to Partition, to this day.

The protesters who are only concerned about exclusion from NRIC, should directly address the issue, separating it from the issue of the persecution of the minorities in the neighbourhood.

The Indian Muslims should resist the instigation to make this a “Hindu-Muslim” issue — something that will only benefit political parties and extremists. They should instead hold HM Amit Shah and PM Modi on their assurances that Indian Muslims have nothing to fear.

Contrary, the protests are becoming more violent, and incidents of hateful comments against Hindus are emerging, from ‘when all idols will be removed...only Allah’s name will remain’ to ‘kafiron se azadi’.

The “sheroes” of Jamia protest, after coming in the limelight, were also revealed to have derided secularism, and proudly proclaimed their extremist beliefs on social media.

Today, reportedly, a Hindu temple has been vandalised by a Muslim mob in Patna, Bihar amidst the chants of “Allahu Akbar”. The helpless onlookers recording the incident can be heard saying, “Hinduon ke sath khilwad kiya gaya hai” (Hindus have been fooled).