Explained: Christian Roots Of Hatred Against Jews And The Holocaust 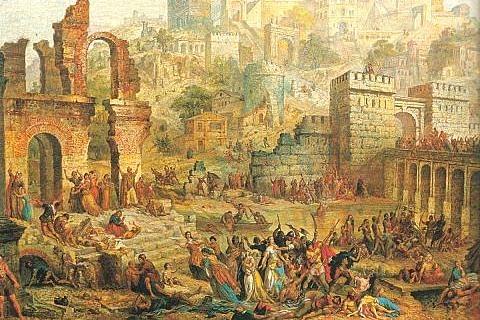 Massacre of the Jews of Metz during the First Crusade, by Auguste Migette (1802-1884) (Source: commons.wikimedia.org/wiki/File:Massacre_of_Jews.jpg)

The United States has seen a spate of anti-Semitic attacks this year, the recent one being a knife attack targeting Hanukkah celebrations inside a rabbi’s home.

According to Anti-Defamation League, in 2018, the hate-crimes against Jews increased by 21 per cent in the New York City as compared to the previous year.

Europe has also seen a rise in the anti-Semitic attacks. According to a report by France’s National Human Rights Advisory Committee (CNCDH), in 2018 anti-Semitic acts in France increased more than 70 per cent compared to the previous year.

In May this year, Germany’s government anti-Semitism Commissioner had to warn Jewish men against wearing the kippah in public following a spike in attacks against Jews.

Many reports quoted the Jewish community members saying they were living in fear, and being shocked at the fact that 70 years after the Holocaust, antisemitism was on the rise again.

The roots of antisemitism

A landmark report released by the Church of England in November this year concluded that the that Christian theology played a part in the “stereotyping and persecution of Jewish people which ultimately led to the Holocaust”.

“Conscious of the participation of Christians over the centuries in stereotyping, persecution and violence directed against Jewish people, and how this contributed to the Holocaust, Christians today should be sensitive to Jewish fears,” the report said.

It added that, for centuries, Christian attitudes towards Judaism have provided a “fertile seed-bed for murderous anti-Semitism”, and noted that a similar hatred of Jews continues to exist today within political discourse by “pro-Palestinian advocates”.

The report is a landmark as in the political domain, the Christian groups have been reluctant to admit the role of the Christianity in the Holocaust, even blaming it on Paganism.

Frederick Schweitzer notes that the studies of the 20th century Nazi holocaust against the Jews invoked racism and pseudo-science, but failed to recognise adequately the Christian antecedents of the Jew-hatred.

Schweitzer holds Christian antisemitism as the “ultimate causal agent” of the Holocaust. He says that the while the church didn’t initiate the holocaust, the “Holocaust could have never occurred without the antisemitic ideology that originated in the New Testament and the church fathers”.

In his book A Concise History of American Antisemitism, Schweitzer points out that all other forms of antisemitism - racial, cultural, economic or others - are transposed renderings of the original Christian form.

“No matter how secular, modern, or even anti-Christian, whether expressed by individuals, groups or institutions, the vocabulary, the turn of phrase, the idioms, betray the Christian roots of antisemitism. It is as though there were a perpetual cycle of plagiarism of Christian antisemitic motifs”

In an afterword to the Church of England report published by the Chief Rabbi Ephraim Mirvis, he criticised the report for its failure to address the question of evangelism.

He said that he had a “substantial misgiving” on the question of evangelism.

“It does not reject the efforts of those Christians, however many they may number, who, as part of their faithful mission, dedicate themselves to the purposeful and specific targeting of Jews for conversion to Christianity.”

The comment of the Chief Rabbi Ephraim Mirvis, which the Church of England describes as “honest and challenging”, shines light on the reality of Christian evangelism, which is often based on ‘othering’ of non-Christians, seeing them as inferiors, and as in the case of Jews, justifies the misery of non-Christians as stemming from them not accepting Jesus Christ as saviour.

Christian evangelism has also come under the scanner in India, where foreign-funded missionaries often abuse and ridicule the indigenous faiths, and engage in deplorable conduct, ranging from lying and deceiving to openly threatening violence, to convert unsuspecting people.

On the other hand, even conversion to Christianity couldn’t save one from persecution, as the suspicion of loyalty to the older faith always remained.

While in Spain, the Jews who converted to Christianity were accused of being crypto-Jews and punished, the Hindus of Goa were, among other things, even burnt alive on the stake on the accusation of secretly practising Hinduism despite conversion to Christianity.

There is another interesting connection between these crypto-Jews and India.

In his lecture at the 2013 Library of Congress, Sanjay Subrahmanyam said that crypto-Jews were especially attracted to India because in India, Jews were able to openly worship in Southern and Eastern India with the Bene Israel, Malibar, Cochin, and Baghdadi Jewish communities.

“The presence of these older communities offered these Jews, who had been forced to accept Catholicism, the chance to live within the Portuguese Empire, away from the Inquisition, and, if they wished, they were able to contact the Jews in these communities and re-adopt the faith of their fathers.”

The Jews and Hindus have the shared history of persecution based on their faiths, and studies of the either, reveal remarkable similarities of experiences, and expressions of resilience and resistance.

The report of the Church of England on antisemitism, at least theoretically, opens the doors for questioning the similar systematic bigotry of the missionaries who went to foreign lands against the indigenous faiths. Recently, Mexico asked the Pope to apologise for massacre of the indigenous people

However, it is important to note that the report of the Church of England has a political-social context.

With the political Islam becoming powerful in Europe, a need to protect the West’s grounding in the 'Judeo-Christian civilisation' is felt among certain sections.

Not only the antisemitism has become more mainstream due to the regressive left aligning itself with the Islamists, but Christianity is also finding itself attacked by aggressive Muslim proselytisation, as well as fast changing demography.

It is in this context that the talks of “kinship” and “profound friendship” between Christianity and Judaism have acquired urgency.