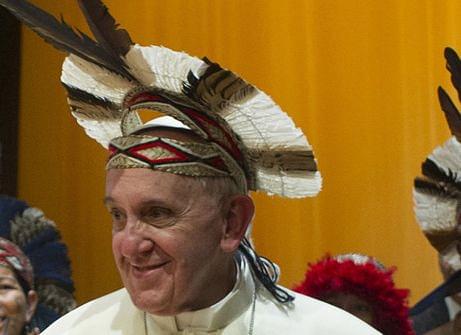 Pope wearing a tribal headdress in Brazil (pic via Facebook)

In what would be radical move, Vatican is mulling ordaining married, elderly men, in order to target their shortage in remote areas, reports New York Times.

The Roman Catholic Church could appoint “viri probati,” or men of proven character, as they are known in Latin using it as an exception to the celibacy requirement. The steps is on table to address the shortage of Christian priests in remote areas of Amazon.

While making it clear that church’s broader commitment to celibacy for priests remains intact, Pope Francis said in the past that he would entertain the possibility of ordaining “viri probati” in remote areas.

In a document to be discussed in upcoming October meet of the church, a proposal for married men as priests has been kept. The document also includes a proposal for an “official ministry” for women in the ‘pan-Amazon’ area where the church sees a great scope for converting indigenous tribes to Christianity.

In the Amazon, “communities have difficulty in celebrating the Eucharist frequently due to the lack of priests,” said the working paper, released by the Synod of Bishops, the Vatican department overseeing the world’s bishops. “For this reason, instead of leaving the communities without the Eucharist, the criteria of selection and preparation of the ministers authorized to celebrate it should be changed.”

Reverend Giuseppe Buffon, a professor of church history at the Pontifical Antonianum University in Rome, says that the Pope is “thinking locally”, keeping in mind “local populations and their cultures.”

The Vatican proposal also suggests that the church better incorporate indigenous “music and dance, in native languages and clothes, in communion with nature and with the community.”

From Hindu architecture of Gopurams and Dhwaja Stambhs to copying literature to produce ‘Jesus Mantra’ in Sanskrit, Christian missionaries have appropriated several Hindu things. There also happens to be a ‘Jesus Gayatri Mantra’ as well as a ‘Christ Sahasranama’. The Hindu Yogic ‘Surya Namaskara’ has been copied in full and used as ‘Jesus Namaskara’. Typical local traditions like “Ezhunellippu” in Kerala have been copied by the Church. They have also published a Hindu-style ‘Veda’ for Christians.

This cultural appropriation of Hinduism is happening simultaneously with calling Hindu temples “Satan strongholds”, that “there is no such thing as Hinduism” and asking the faithful to “punch Hindus in the face and give them a bloody nose” by none other than Christian priests of high standing.

On one hand, Christian missionaries call Hindu deities ‘Satans’, and on the other, copy liberally from the Hindu pantheon of gods and goddesses, purportedly to fool the innocent people in remote areas. A statue of Mary can be found holding a baby Ganesha, in attempt to make her look like Parvati. Jesus is shown with Lord Venkatesh-style Tilaka, in saffron clothes with halo and other Hindu symbols of enlightenment. The missionaries themselves dress in saffron clothes like Hindu saints in the attempts to gain following.

On one hand, the missionaries do the propaganda of “Papi Krishna vs Nishpap Yeshu” (sinful Krishna vs sinless Jesus), on the other, try to imitate Lord Krishna, a popular Hindu deity in Jesus’s iconography, going as far as showing him on a ratha with Arjuna in the place of Sri Krishna in the Kurukshetra. It is also clear that while propounding monotheism in theory and criticising ‘idolatry’ of Hindus, Christian priests themselves indulge in it.

While ‘caste’ and Hindu rites and rituals are the mainstay of the Christian criticism of the oldest surviving major religion of the world, attempts are underway to incorporate both of them by the evangelists. Not only caste discrimination is prevalent among Christians in India, but also, evangelists are trying to build caste Christian communities. Several Hindu rituals, for instance, used in Hindu marriage, Mangalsutra or Thali, are copied by the Christians, and given a ‘Christian twist’. For example, mangalsutra will have the locket containing picture of high-placed Church functionary like Pope.

The proposal to dilute requirements of celibacy has also had its detractors. Critics see it as indicative of a lack of doctrinal discipline that they believe has marred Francis’ pontificate. They worry it could lead to all sorts of changes that will dilute the orthodoxy of the church.