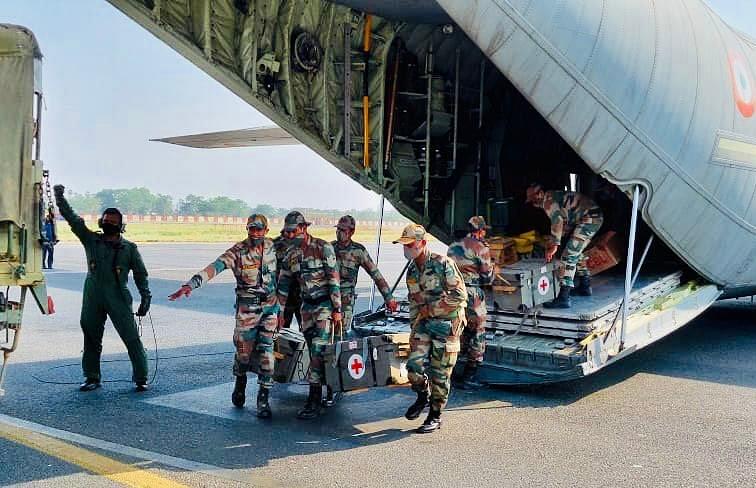 Even as India takes on the second wave of Covid-19, the armed forces have plunged into action in different parts of the country to strengthen the battle against the pandemic. Here’s a look at how our army, navy and air force are pitching in to help the nation survive this global crisis.

Earlier this week, the Indian Army established an exclusive Covid management cell under a Director General rank officer. This cell will report directly to the Vice Chief of Army Staff and is tasked with enhancing efficiency in coordinating real time responses to the steep rise in Covid cases across the country.

The Indian Air Force (IAF) which has swung into action at the onset of the pandemic last year running numerous sorties to ferry medicines and other supplies as well as transporting Indians stranded abroad, has once again pressed its transport aircraft and helicopters into service.

While on the one hand they airlifted doctors and nursing staff from Kochi, Mumbai, Vizag and Bengaluru for hospitals in Delhi, in the last week of April, the C-17 and IL-76 aircraft of IAF airlifted big empty oxygen tankers from their place of use to the filling stations across the country to speed up the distribution of the much-needed oxygen.

In addition, they also have transported large quantities of load comprising bio safety cabinets and autoclave machines for setting up of an additional Covid test facility at Leh.

Along with the Indian Navy, the IAF has intensified efforts in the last one week to ferry oxygen and medical equipment. As on 7 May 2021, the C-17 aircraft of IAF have conducted 400 sorties from within the country, including 351 to airlift 252 oxygen tankers of total capacity of 4,904 metric tonnes (MT).

The containers and cylinders were procured from Singapore, Dubai, Bangkok, UK, Germany, Belgium and Australia. In addition, the C-17 and IL-76 aircraft have been tasked to airlift cryogenic oxygen containers, oxygen generators and ventilators from Israel and Singapore.

The INS Kochi carrying three 27-MT oxygen containers, three oxygen concentrators and 800 oxygen cylinders from Kuwait is expected to reach Mundra/Mumbai on in the next three days.

It will be joined by INS Tabar which bring two 27-MT oxygen containers and 600 oxygen cylinders also from Kuwait.

Two 27-MT oxygen containers from Doha are scheduled to arrive at Mumbai on 10 May by INS Trikand.

The DRDO kickstarted work to set up 500 medical oxygen plants within three months under PM CARES Fund. These oxygen plants are designed for a capacity of 1,000 litres per minute (LPM) and can cater to 190 patients at a flow rate of 5 LPM and charge 195 cylinders per day.

On Wednesday (7 May), a contingent of 41 naval personnel from Western Naval Command, comprising medical officers, nursing officers, paramedics and support staff were deputed to the PM Cares Covid Hospital, Dhanvantari at Ahmedabad. They join a team of 57 members who have already been stationed at the hospital since 29 April.

As per the briefing received by Defence Minister Rajnath Singh during his review of the efforts of the Ministry of Defence and armed forces, approximately 600 additional doctors have been asked to help in the Covid operations through special measures like asking recently retired personnel to report to duty.

Around 200 battlefield nursing assistants of the Indian Navy have been deployed at various hospitals, while the Indian Army has made available more than 720 beds for civilians across the country. Health veterans have also joined the battle by operating a tele medicine service to patients in home isolation.

Cantonment boards (CB) too have joined hands and 39 CBs are handling 40 general hospitals across the country manning 1,240 beds. About 37 CBs are equipped with oxygen support while 418 beds are available at the cantonment general hospitals (CGHs) of Kirkee, Deolali, Dehuroad, Jhansi and Ahmednagar that have been turned into Covid care centres.

IAF and Indian Navy have intensified their efforts to help the civil administration in tackling the current Covid-19 situation by ferrying oxygen containers and medical equipment.