Islamic Countries Of Indian Subcontinent - Afghanistan, Bangladesh, Pakistan - Where Are Your Hindus? 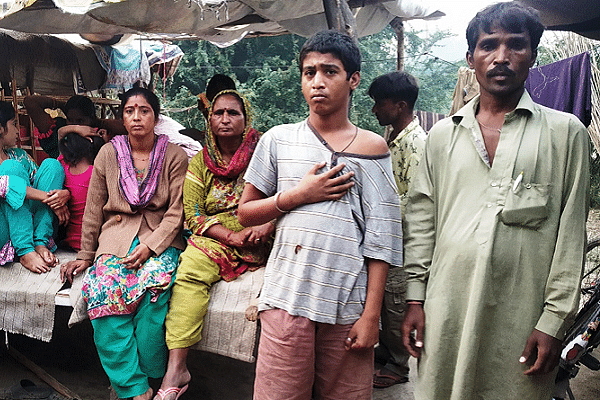 Hindu refugees from Pakistan in India

Since then, the small Sikh and Hindu communities in Afghanistan have reportedly made multiple appeals to the Indian government for “immediate evacuation”.

The precarity of the condition of Indic communities in Islamic countries of the subcontinent rarely become a subject of focus in the international fora, when it does, it remains limited to individual attacks by the terrorist groups.

Whereas, the issue of the Indic communities in the subcontinent is deeply embedded in its history — invasion, occupation, ethnic cleansing, genocide, forced conversions, and the 1947 Partition — and intertwined with historical hatred against polytheists, pagans and “idol-worshippers”.

Most of all, the question of the Indic communities is a part of how the legacy of the 1947 Partition is playing out.

Afghanistan was a thriving hub of the Indic cultures before the Islamic invasions. Several Hindu, Buddhist, Jain relics have been found here.

In an Indian Express article, Divya Goyal records her conversation with the historian Inderjeet Singh, author of ‘Afghan Hindus and Sikhs: A History of A Thousand Years’.

According to him, Hindu rulers once reigned over Eastern Afghanistan, including Kabul, and were replaced only by the end of the 10th century by Ghaznavids.

In 1504, Mughal Emperor Babur captured Kabul. “Babur used to refer to Kabul as ‘Hindustan’s own market’ and the province of Kabul remained with Hindustan until 1738,” he says.

According to the historian, until the 1970s, there were at least 2 lakh Sikhs and Hindus (in a 60:40 ratio) in Afghanistan. He says:

Several documents record the thriving trade of Hindus and Sikhs in Afghan society but today, 99 per cent of them have left the country.

"Afghanistan now refuses to acknowledge them as their natives but they have made contribution to their motherland despite a turbulent journey. Can an Afghan be a Hindu or a Sikh? History says, YES,” Singh writes in his book.

In 1988, on the first day of Baisakhi festivities, a man with an AK-47 stormed a gurdwara in Jalalabad and gunned down 13 Sikhs. In 1989, Gurdwara Guru Teg Bahadur Singh in Jalalabad was hit by rockets fired by the Mujahideen and 17 Sikhs were killed.

After the Mujahideen takeover, the exodus of Hindus and Sikhs worsened. There were widespread kidnappings, extortion, property grabbing incidents and religious persecution.

In the months before the Mujahideen took over Kabul, speedy passports were issued to Indics under a scheme called Aab Gang pilgrimage passport (Aab meaning water, Gang meaning river Ganga).

The Indian Embassy set up an on-the-go visa department at Gurdwara Har Rai Sahib in Shor Bazar of Kabul to rapidly issue visas to Hindus and Sikhs.

“Some 50,000 people left Afghanistan under this scheme and came to India,” Singh said.

Currently, Hindus and Sikhs in Afghanistan number around a 1,000 each. This would constitute a 99 per cent decline in three decades.

Pakistan, notorious for abuse of Indic communities, did not release the religious composition of its population in the most recent census in 2017, the country's first national headcount in 19 years. So, there is no real figure of Hindu and Sikh population in Pakistan.

Over and above, the Pakistani scholars and rights activists have disputed the official statistics.

Sikh rights activists were quoted by an India Today report as saying that the size of the Sikh community has drastically come down within the past two decades — from around 40,000 in 2002 to 8,000 now.

"This is a fact the Sikh population in Pakistan has been consistently declining," Professor Kalyan Singh of Lahore's GC College University was quoted as saying. "One of the reasons behind this decline is of course forced conversion," he added.

If the same figure is assumed for the Hindus in Pakistan (who are worse-off than the Sikh community in the socio-economic parameters), this would constitute a decline of about 80 per cent in Sikh, Hindu population in Pakistan in just two decades.

This might explain the reluctance of the Pakistani government in publishing the population figures for Hindu and Sikh minorities. They are formally invisiblised to facilitate their physical extinction.

A 2015 report by the South Asia Partnership-Pakistan in collaboration with Aurat Foundation states that around 1,000 women are forcibly converted to Islam in Pakistan every year.

The Hindu community of Pakistan is forced to except its fate in the face of institutionalised persecution and virtual silence of the global community.

An Al Jazeera report quoted a Hindu man in Pakistan as saying, “Our community can bear looting and the kidnapping of our men, but the abduction of our daughters and wives is too painful.”

"I'm terrified he will kidnap me, force me to accept Islam and marry him..he is not Hindu. I will die before I marry him," the same report quoted a minor Hindu girl, Madhuri, a victim of attempted abduction, as saying.

The statement of Madhuri mirrors across millions of Hindu women who have been historically targeted for rape, enslavement and forced conversions because of their religion, recently as part of the Kashmiri Hindu ethnic cleansing.

A 2018 movie, Padmavat, depicted the story of Rani Padmavati who chooses to sacrifice herself to avoid being captured by Alauddin Khilji who invades Chittor out of his lusts for Padmavati.

Among other things, the movie was criticised as Islamophobic, but was a commercial success and became one of the highest-grossing Indian films of all time.

One would expect Bangladesh to perform better due to a better cultural continuity after the partition, as well as the important role played by India in the liberation of Bangladesh.

Prior to the Bangladesh Liberation War of 1971, the Pakistani army and extremist groups had conducted a targeted genocide of the Hindus. But even an independent Bangladesh couldn’t arrest the persecution of Hindus.

Compare Afghanistan, Bangladesh and Pakistan’s to the situation of India, the only non-Muslim majority country in the subcontinent, and one of the three nation states resulting from the 1947 partition of the Indian subcontinent.

In India, the Muslim population increased from 9.8 per cent in 1951 to around 15 per cent today.

A closer look shows that India, and specifically the Indic communities have been the worst victims of the 1947 Partition.

Several scholars misrepresent the Partition as a division based on religion.

The Partition, in its inception as well as the outcomes as visible today, was an Islamic supremacist project, and Pakistan was a result of the demand of a separate Muslim homeland, not a partition on religious lines. This distinction is important.

Abhinav Prakash, a noted scholar and an Assistant Professor at the Delhi University puts it bluntly:

“It wasn't partition of India. It was Hindus losing large parts of Indian subcontinent. For the first time in history Hindus don't exist in those places. It was no solution to Hindu-Muslim problem. It was simply a defeat of Hindus in just another episode of the history.”

The challenges of our times, be it Kashmir, or CAA-NRC, cannot be understood in dissociation with the history of the subcontinent.