Killer Who Received State Patronage: The Many Crimes Of Yasin Malik, Now To Be Tried For Murder Of IAF Officers 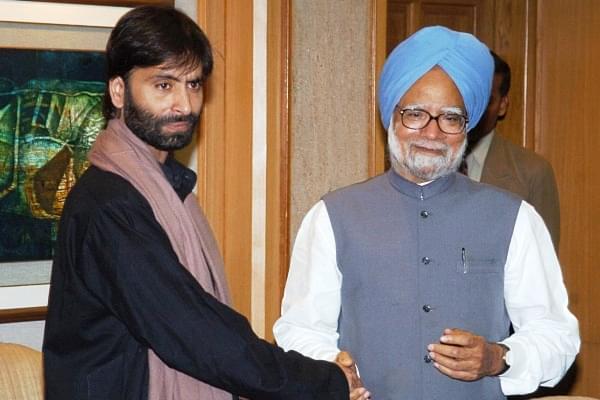 Malik among other things is accused of killing four Indian Air Force (IAF) officials on the outskirts of Srinagar.

Besides managed to life virtually scot-free all these years, he was also actively appeased by the Indian establishment which included him meeting former prime minister Manmohan Singh in New Delhi back in 2006.

Now there is finally a glimmer of hope for the victims’ family members as Malik would finally be tried by a TADA court in Jammu over the murder of IAF officers and the kidnapping Rubaiya Sayeed, the daughter of then home minister Mufti Mohammed Sayeed.

The trial is set to begin against Malik on 1 October, almost 30 years after the murder of the IAF officers.

In light of this development, here’s a brief look at all the charges against Malik, who despite their serious nature, was actively courted by the establishment as part of its outreach to "restore normalcy in the valley”.

Malik who was the general secretary of Islamic Students League (ISL) is said to have crossed over to Pakistan occupied Kashmir (POK) after the 1987 state elections to receive arms training from ISI.

He has himself claimed to have received training along with 3,500 other Kashmiri jihadis at the Rawalpindi farmhouse of current Pakistan railway minister Sheikh Rashid Ahmed. Rashid is said to have accompanied Malik to the LoC multiple times between 1988-90.

In 1989 he returned to the valley and turned to terrorism militancy as a core member of Jammu Kashmir Liberation Front (JKLF).

Ganjoo a High Court Judge and prominent Kashmiri Pandit was shot dead by three terrorists on 4 November 1989 in Srinagar. He had earlier given a death sentence to JKLF terrorist Maqbool Bhat.

Malik is one of the accused in the murder and also purportedly confessed to killing Ganjoo in a television interview.

Sayeed, the daughter of then home minister Mufti Mohammed Sayeed was kidnapped on 8 December 1899 and the government ultimately freed five jailed terrorists in exchange of her release. Malik is said to have orchestrated the kidnapping.

One of the ghastliest crimes Malik has been accused of is the murder of four IAF personnel on the outskirts of Srinagar. As journalist Aditya Raj Kaul painfully describes here, on 25 January 1990 around 14 IAF officers were waiting at a bus stop in Rawalpora chowk to wait for an IAF bus to ferry them to a nearby airport.

Then a gypsy and bike arrived at the location and five terrorists armed with AK-47s and pistols opened fire at the IAF officers. Caught off-guard, the officers ducked to the ground but the terrorists claimed four victims including Squadron Leader Ravi Khanna, Corporal DB Singh, Corporal Uday Shankar and Airman Ajad Ahmed.

The terrorists later celebrated the attack at the spot and raised jihadi slogans before fleeing. Malik is accused of being the main perpetrator behind the attack.

In August 1990 Malik was captured by the security forces and was thrown behind bars till 1994 when he finally got bail. Then he claimed to have “renounced violence and became a Gandhian”.

In 1995 a stay was granted by a single bench J&K court in the case of Rubaiya Sayeed. While he was briefly jailed on a couple of occasions he began mingling with the New Delhi crowd and by his own admission met Manmohan Singh once at a journalist’s house in 2001 and also visited the residence of Sonia Gandhi in 2003.

He was officially invited for talks by the office of then prime minister Manmohan Singh on 17 February 2006.

The Indian investigation agencies began taking a serious look at Malik and arrested him in April in connection with NIA’s terror funding case. He is currently lodged in Tihar Jail.

His JKLF was banned by the centre in March under the anti-terror law for "promoting" secession of the state from the Union of India.

Besides being tried for the murder of IAF officers, Malik would also be investigated by the CBI in connection with Rubaiya Sayeed’s kidnapping.

The wheels of justice now finally seem to be in motion.