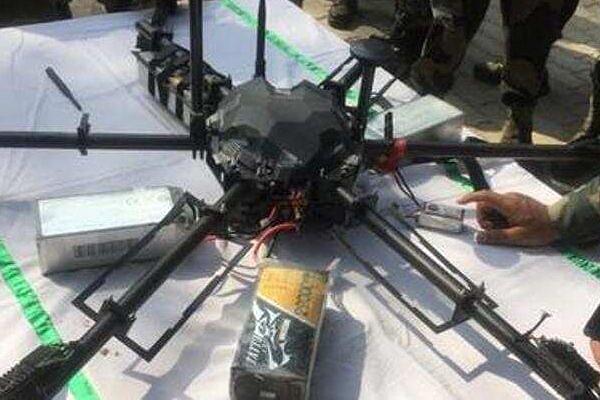 With declining infiltration of terrorists into Jammu and Kashmir due to changed security apparatus after the revocation of Article 370 of Constitution, Pakistan’s ISI along with Khalistan Zindabad Force (KZF) and other terrorist groups has adopted a new modus operandi to fuel terror strikes in India.

Reports from security agencies revealed that the spy agency Inter-Services Intelligence is now using drones to deliver arms and ammunition from across the International Border (IB) into the Indian territory.

A change in ISI's tactics were noted within a month after the Ministry of Home Affairs (MHA) on August 5 last year revoked the special status, or limited autonomy, granted under Article 370 to Jammu and Kashmir.

Nearly a dozen Chinese commercial drone sorties, carrying almost 100 kg of arms and ammunition, were sent from across the border into Punjab by the Pakistan-based Khalistani terror group in close coordination with the ISI between September 9 and 16 last year, said officials the Border Security Force (BSF).

Those drones with 10 kg payloads flew for almost seven km from their launch pads at a height of 2,000 feet to deliver the deadly payload.

The latest such instance was noticed on Saturday morning when BSF troops shot down a Pakistani HexaCopter drone carrying one M4 carbine machine (US-made), two loaded magazines (60 rounds), and seven Chinese grenades near the IB in Jammu and Kashmir's Kathua district.

The drone was spotted hovering in the vicinity of Border Out Post Pansar around 5.10 am by a BSF patrol party which then shot it down 250 metres inside Indian territory.

It was learnt that the whole plot was orchestrated through Germany and Lahore in Pakistan and such attempts, along with infiltration of terrorists, aimed to give an impetus to violence in the Kashmir valley and elsewhere amid the ongoing stand-off between Indian and Chinese soldiers in Ladakh.

Jammu and Kashmir Police chief Dilbag Singh on Thursday had warned that Pakistan will try to infiltrate more terrorists in the Kashmir Valley.

A source in one of the Indian security establishment wings said that these drone-dropped weapons were to be used by terrorist outfits like Jaish-e-Mohammed, Hizbul Mujahideen, Lashkar-e-Taiba and others as they are joining hands to create mischief in Jammu and Kashmir.

As per the source, over 300 terrorists are present at the launch pads across the Line of Control in Pakistan-occupied Kashmir (PoK), waiting to infiltrate into India. They, along with ISI and Khalistan groups, have been involved in pushing arms and ammunition in the Valley.

The Indian Army, meanwhile, is taking steps to 'recalibrate' its counter-infiltration grid and counterinsurgency strategies to check intrusion by ultras.

In connection with smuggling of arms from Punjab to Jammu and Kashmir through terror groups linked to their Pakistan- based handlers, more than six people have so far been arrested by Punjab Police in Tarn Taran district, near a border drain that is merely 2 km from the fence on the international border with Pakistan.

The interrogation of the arrested revealed that KZF's Germany-based operative Gurmeet Singh Bagga in coordination with his Pakistan-based chief Ranjeet Singh aka Neeta had done deliveries of at least four weapons, grenades, electronics, and fake currency through drones.

The entire operation came to light after the discovery of a burnt drone in Punjab in September.

The intelligence agencies have already submitted a report to the Ministry of Home Affairs on the misuse of drones, citing incidents across the country. The National Investigation Agency has been investigating drone cases and the role of 'state actors' in the whole matter.

The fresh drone movement observed on the IB by the BSF on Saturday is significant in the backdrop of the Galwan Valley face-off reported on June 15 night where India lost 20 of its soldiers, including Commanding Officer of the Bihar Regiment, Colonel Santosh Babu.