‘No Calamity, No Crisis Can Determine Future Of 130 Crore Indians’: PM Modi Says In His Letter To Nation 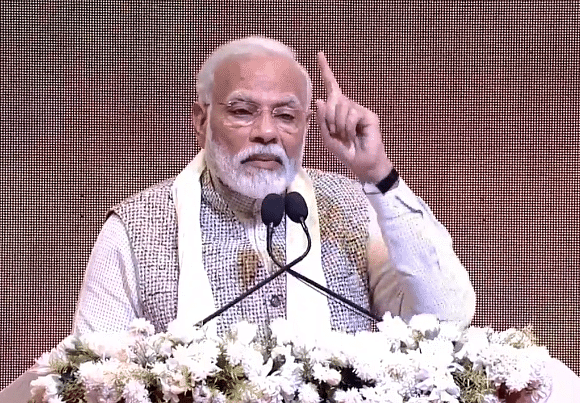 On the first anniversary of the second term of the Bharatiya Janata Party-led National Democratic Alliance (NDA) government, Prime Minister Modi has penned a letter to the citizens of the country, in which he acknowledged the sufferings of the migrant workers and expressed confidence that India will emerge victorious in the battle with the Coronavirus pandemic.

“Had the situation been normal, I would have been blessed to be in your midst. However, the circumstances brought about by the global coronavirus pandemic have led me to write this letter and seek your blessings,” the PM said in the letter.

PM Modi said that under the NDA government, the country has moved ahead with an unprecedented pace with historic decisions and development. However, he acknowledged that there is a lot that needs to be done as many challenges and problems face the country.

“I am making all efforts day and night. I may have some deficiency, but the country does not have any. That is why I place more confidence in you, in your strength and in your capacity. You, your support and your blessings are the energy behind my resolve,” PM Modi added.

Talking of the people’s sufferings during the pandemic, PM Modi said that it cannot be claimed that no one suffered any trouble or inconvenience.

“Our workers, migrant brother and sister labourers, those working in small industries, cart pushers and vendors, our shopkeeper brothers and sisters and those having small businesses have suffered immensely,” he said, adding that the government is working in a united and determined way to alleviate their troubles.

PM Modi asked people to ensure that that these inconveniences should not transform into a crisis of life.

“For that, each Indian has to follow all directives. We have to move forward with the same patience and courage that we shown so far. This is the reason why the situation in India has so far been manageable in comparison with other countries,” he said.

This battle will stretch on, but we are on way to victory, and to be victorious is our common resolve, he said.

Referring to the post-COVID world, the prime minister said there is a widespread debate on how the economies of various countries, including India's, will recover.

"However, given the way India has surprised the world with its unity and resolve in the fight against coronavirus, there is a firm belief that we will also set an example in economic revival," PM Modi asserted.

“Today, the time demands that we must stand on our feet, and we will have to move on our own strength. And for this, there is only one path: a self-reliant India (atmanirbhar Bharat). The recent economic package of Rs 20 lakh crore is a big step towards ''Atmanirbhar Bharat'' campaign,” PM Modi said.

This campaign will usher in a new trend of opportunities for every countryman - our farmers, workers and labourers, medium enterprises and the youth associated with startups, he said.

“India will reduce its dependence on imports with the sweat of its citizens, with their hard work and skills, thus becoming self-dependent,” PM Modi said.

He said that Coronavirus pandemic has brought about a crisis situation, but at the same time, for us Indians, this is also the time for determination.

“We have to remember that no calamity, no crisis can determine the present or future of 130 crore Indians. We will decide our present and, the future too,” PM Modi asserted.

We will move ahead, we will race ahead to progress and we will be victorious, he said.