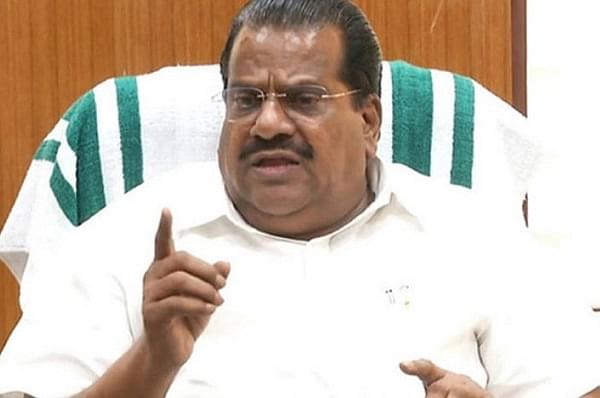 The Left Democratic Front (LDF) government in Kerala is facing more embarrassment over the gold smuggling case and the controversy over the State housing scheme for the landless and homeless.

This time, it is State Industries and Sports Minister, E P Jayarajan, the number two in Chief Minister Pinarayi Vijayan’s Cabinet, who faces trouble, as his son, Jaison’s name has been linked to both the cases.

This comes on the heels of the Enforcement Directorate questioning Higher Education Minister KT Jaleel in connection with the smuggling case and CPM Kerala General Secretary Kodiyeri Balakrishnan’s son Bineesh being linked to the Bengaluru drug trafficking case.

Jayarajan has two sons, Jaison and Jithin Raj, both of whom have been caught in a couple of controversies.

Local media reports said that Jayarajan's son’s name came up during the interrogation of Swapna Suresh, the prime accused in the gold smuggling case.

She also allegedly received a commission in the State LIFE Mission housing project, which is to provide houses for the landless and homeless.

At least Rs 4 crore is believed to have been paid as commission in the housing project and Jayarajan’s son is suspected to have got a share of this.

Investigation agencies have also got hold of photographs of Swapna with the minister’s son.

The Kerala smuggling case came to light on 5 July when Customs officials seized 30 kg of gold valued at Rs 14.5 crore from diplomatic baggage meant for the United Arab Emirates (UAE) Consulate in Thiruvananthapuram.

The seizure has led to the unearthing of a gold smuggling racket leading to the Chief Minister’s Office, where the now suspended principal secretary, M Sivasankar, had called Customs officials to let off Swapna.

Over a dozen persons have been arrested in connection with the case, now being investigated by the National Investigation Agency in view of terrorist links and chances of the nation’s security being at risk.

KT Jaleel is under scrutiny for reportedly distributing copies of Quran in Malappuram district after getting them as a donation from the UAE Consulate.

There is suspicion over whether Jaleel took some contraband items like gold in the garb of the Quran copies.

Also, he and the Consulate have been charged with violating protocols since such donations are not permitted.

In the case of the housing project, serious protocol and procedural violations are alleged to have taken place.

More trouble could be on the cards as the Enforcement Directorate is likely to summon Jayarajan’s son, while the NIA is preparing to summon Jaleel.

These developments have led to a call for both their resignations, while the Opposition United Democratic Front led by the Congress claims that the Vijayan government has lost the moral right to continue in office.