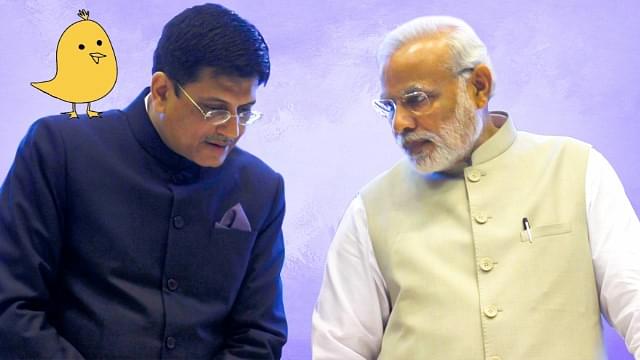 Union Minister of Railways Piyush Goyal today (9 February) announced that he has signed up on Made-In-India social media application Koo and urged his followers to do the same.

He becomes the second senior minister in the Narendra Modi led central government to signup on the platform. Electronics and IT Minister Ravi Shankar Prasad has been a member of the social media platform since last year. Minister of State for Shipping Mansukh Mandaviya is also on Koo.

Connect with me on this Indian micro-blogging platform for real-time, exciting and exclusive updates.

Let us exchange our thoughts and ideas on Koo.

The recent spurt in government signups on Koo are being seen in the context of the centre's ongoing tussle with Twitter.

The Jack Dorsey led social media giant has been sent a notice for unilaterally restoring over 250 controversial accounts which spread a fake hashtag alleging that Modi government was planning a farmer genocide.

Twitter had blocked access to these accounts following a legal request but proceeded to restore them within hours by calling the controversial tweets "newsworthy".

Twitter officials face a jail term of up to seven years if the government decides to take action under relevant sections of the IT act.

The Modi government has also sent a fresh order to Twitter asking it to block 1,178 pro-Khalistan accounts. Twitter is yet to comply with the order.

The government has also taken a serious note of Twitter CEO Jack Dorsey "liking" a Tweet asking for an emoji for the hashtag #FarmersProtests.

Officials aware of the matter have said that while Facebook and Google’s YouTube have proactively complied with similar requests from the ministry of electronics & IT (MeitY), “Twitter is being the only exception.”

“There is a serious law and order situation in the country, and with the revelation of the toolkit, it is clear that there is involvement of international syndicates and countries like Pakistan to fuel the tension. Who is Twitter to decide what is free speech?” an official said.

As per reports, an FIR against Twitter and suspension of its services may be on the cards.

Koo has been developed as an Atmanirbhar Bharat alternative to Twitter and offers its services in regional languages like Hindi, Kannada, Telugu, Tamil, Bengali, Gujarati and Marathi. One can also use it in English, which can be toggled on in the settings menu.

Koo was awarded the second prize in the AatmaNirbhar App Challenge and Prime Minister Narendra Modi himself endorsed its usage in his Maan Ki Baat. Koo was also awarded by Google as one of the best apps in the Everyday Essentials category.

Founded by Aprameya Radhakrishna and Mayank Bidawatka in March last year, Koo has made a big splash in the Indian market in a short time span. It has over a million play store downloads and is on the seventh spot in the social media apps category in the iOS store.

Koo has also raised $4 million in Series A funding from Mohandas Pai’s 3one4 Capital.

The user experience on an android phone is smooth and one can easily navigate through the app if he or she has used social media applications in the past. The app also allows a 400 character limit, 120 more than what is offered by Twitter.

Amid rising interest, Koo though needs to iron over a few pressing issues.

The platform doesn't offer a mobile or a desktop version of its app and users have urged the developers to improve the iOS interface and improve the search functionality. Many have also urged the app makers to change its logo (a yellow bird) to differentiate itself from Twitter. The developers can also consider rolling out a dark mode - a very popular feature among Twitter users.

It remains to be seen whether rise of applications like Koo would mark a shift towards Made-In-India social media platforms - a demand of many amid rising Big Tech tyranny against Conservative and Right Wing voices.