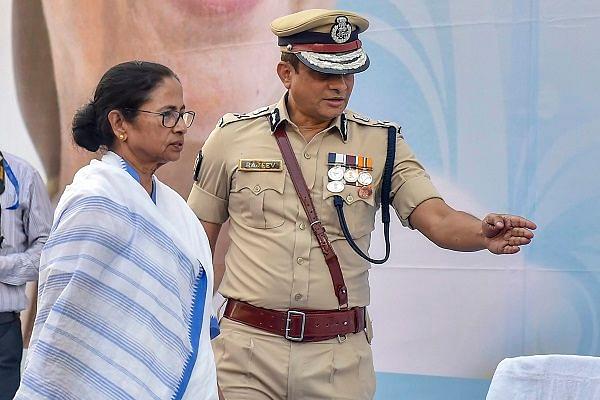 Usually, it is a criminal who goes 'underground' when cops launch a manhunt for him. But over the past few weeks, a very senior Indian Police Service (IPS) officer of Bengal, and one who is considered very close to Chief Minister Mamata Banerjee, has gone 'missing'. Ironically, he heads the state Crime Investigation Department (CID) that is mandated to crack complicated crimes and nab elusive criminals.

Senior IPS officer Rajeev Kumar, who was the commissioner of Kolkata Police and is now the Additional Director General of the state police's CID, is on the run from the Central Bureau of Investigation (CBI).

He is wanted by the central agency for questioning in the Rs 35,000 crore Saradha chit fund scam as well as a few other similar scams that defrauded millions of people, mostly poor, in Bengal, Assam, Tripura and Odisha.

Kumar was the commissioner of Bidhannagar (Salt Lake) Police when the Saradha scam came to light in April 2013. He was appointed by Banerjee as head of the special investigation team (SIT) to probe the scam. The probe was, in May 2014, handed over by the Supreme Court to the CBI.

In the course of the probe, the CBI discovered that a lot of vital evidence was not handed over by the SIT. CBI sleuths suspect that evidence, including call records and electronic evidence, that could have implicated the top leadership of the Trinamool, was destroyed.

Hence, the CBI wanted to interrogate Kumar, who was heading the SIT. When repeated requests to Kumar to appear before the agency were ignored and snubbed, CBI sleuths went to his residence in early February this year to serve a notice on him.

This move triggered high drama with the CBI officers being forcibly taken away to a police station and detained there. Chief Minister Mamata Banerjee reached Kumar's residence, held a press conference at the gates alleging witch hunt by the Centre, and then sat on a dharna in support of Kumar.

The matter reached the Supreme Court, which asked Kumar to appear before the CBI at a neutral venue (Shillong). The apex court also granted Kumar immunity from arrest or any coercive action by the CBI. The CBI interrogated the top cop for several days, but he was always reportedly uncooperative.

Several rounds of interrogation of Kumar followed at the CBI office in Kolkata, but the IPS officer reportedly stonewalled queries and refused to answer many questions. He reportedly stonewalled CBI's attempts to get to the bottom of the scam and trace all missing evidence to nab the beneficiaries and kingpins of the scam. But the CBI's hands were tied since the courts had granted Kumar immunity from arrest.

Earlier this month, the courts removed the shield and fearing arrest, Kumar went on a long leave. Since then, he has ignored repeated summons by the CBI while his lawyers have desperately appealed to the courts to restore the legal shield (that he can't be arrested). But the lower courts refused, and the case is being currently heard in camera by the Calcutta High Court.

The CBI raided Kumar's residence a number of times, questioned his wife who is a senior Indian Revenue Service officer and commissioner of income tax, questioned a few people suspected of sheltering him and carried out searches at hotels, resorts and private hospitals in and around Kolkata. The CBI also approached Bengal director general of police and state home secretary for information on Kumar's whereabouts, but was rebuffed.

It is mandatory for officers going on leave to inform their seniors and their offices about their whereabouts and provide an address and number where they can be contacted. But Kumar's seniors told CBI they had no information about him. Kumar's leave expired on Wednesday (25 September) and he was issued another summon by the CBI to appear before it on Thursday. But this summon, too, has been ignored.

The CBI says that custodial interrogation of Kumar is necessary to get to the truth about missing evidence. And this is exactly what the top cop, who is said to be an expert in tackling cyber crime and is an expert in electronics and software as well as hardware, seems to fear.