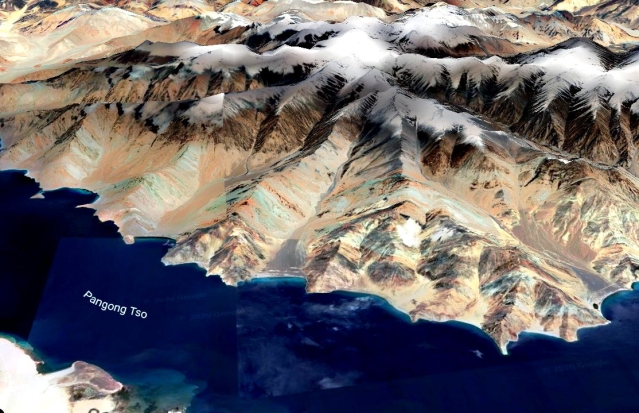 Satellite imagery of the northern bank of the Pangong Lake, dated 11 September, shows a new Indian position on a height of nearly 6,000 metres.

This new Indian position, experts said, dominates the Chinese positions which came up on the ridgeline of Finger 4 after China occupied the feature in early May.

The image, which suggests that Indian troops can now observe Chinese movements, was posted on Twitter by anonymous satellite imagery analyst @detresfa_.

Earlier this week, media reports based on sources in the Indian Army and the Ministry of Defence said that Indian troops had taken position on heights which dominate Chinese positions on Finger 4.

In May, the People’s Liberation Army had occupied the area between Finger 4 and Finger 8 on the northern bank of the Pangong Lake.

Both India and China claim the area between Finger 4 and 8 as their own. Before May 2019, troops from both countries patrolled the area.

When China occupied the Finger 4 ridgeline, Indian camp between Finger 3 and 4 had become vulnerable to a Chinese attack from the heights.

Since then, a visibly irritated China has sharpened its rhetoric and is trying to dislodge Indian troops from these heights, which give the Indian Army a dominating position around the Spanggur Lake and the Spanggur Gap.

This satellite image comes a day after Indian and Chinese foreign ministers met at the sidelines of a Shanghai Cooperation Council event in Moscow.

The meeting had lasted for over two hours.

The two ministers agreed to pursue disengagement and normalisation of relations between India and China after months of tension.

China watchers in India, however, said that the chances of the issue being resolved in the short term are rare. Experts pointed to Foreign Minister S Jaishankar’s statement in which he had said that the relations between the two countries in other fields can’t remain unaffected by the situation on the ground in Ladakh.

“If peace and tranquillity on the border is not a given, then it cannot be that the rest of the relationship continues on the same basis,” the Foreign Minister had said while participating in an online event to mark the release of his book, The India Way.