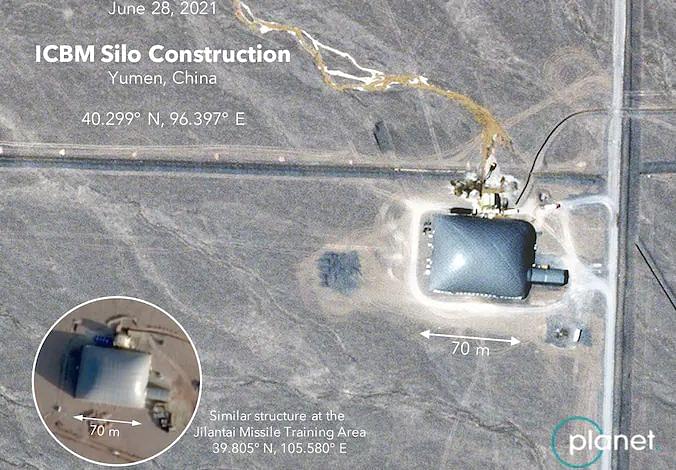 The ICBMs, equipped with nuclear warheads, will be stored in these silos to ensure their survivability in case of a first strike on China by another nuclear power like the United States.

The new ICBM silos are coming up close to the northwestern city of Yumen in China’s Gansu province. The sites are spread over hundreds of square miles of arid terrain, satellite imagery studied by researchers at the James Martin Center for Nonproliferation Studies in the US suggests.

Researchers have identified 119 construction sites which have features mirroring those seen at existing launch facilities in China. If the missile silos that China is building in other parts of the country are added, the number goes up to 145.

Each of the 119 sites is separated from each other by a distance of over 3 kilometres. The ones which have been completed are covered with a dome-like covering, also seen at other Chinese missile silos.

While the construction began earlier this year, China had been preparing for months, experts who studied the satellite images said.

China's plan, experts say, is to spread out its nuclear missiles in silos built in different parts of the country so that its adversaries do not know exactly where its nukes are at any given time. The aim is to ensure the survival of the weapons and delivery systems in numbers sufficient to beat the US' missile defences.

This development comes soon after the Commander of the US Strategic Command Admiral Charles Richard called the buildup of Chinese nuclear capability “a breathtaking expansion".

“China’s nuclear weapons stockpile is expected to double (if not triple or quadruple) over the next decade," Admiral Richard wrote.

China currently has between 250 to 350 nuclear warheads, experts say. Its arsenal is dwarfed by that of the US, which has around 5,000 warheads.

"China intends to increase the peacetime readiness of its nuclear forces by moving to a launch-on-warning posture with an expanded silo-based force," a 2020 report by the US Department of Defense says.

"Imagery from 2019 has revealed that China has constructed an ICBM silo at one of the PLARF’s Western training ranges that is smaller than China’s existing CSS-4 (DF-5) silos. According to state media, the CSS-X-20 (DF-41) ICBM can be launched from silos; this site is probably being used to at least develop a concept of operations for silo basing this system. There are also some indications that China may be building new CSS-4 (DF-5) ICBM silos," the report added.