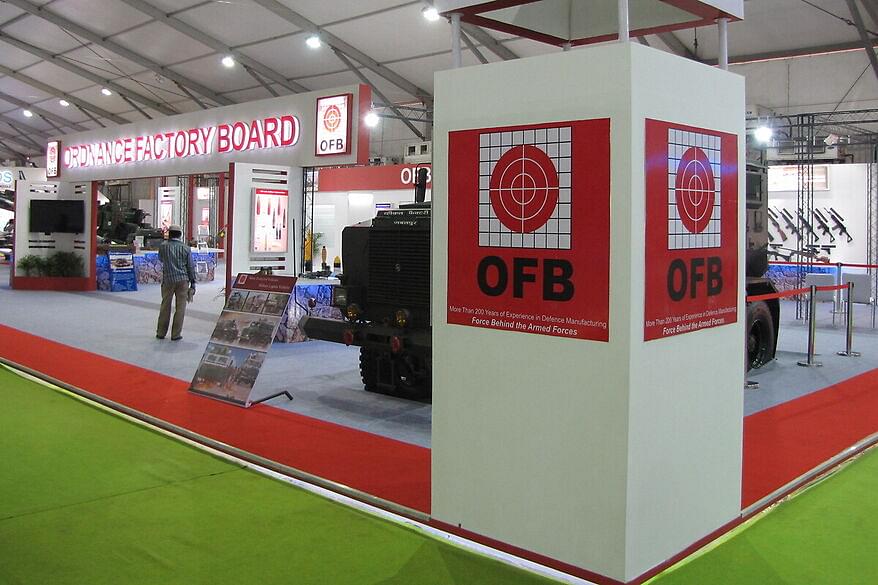 An Ordnance Factory Board stall at an expo.

Prime Minister Narendra Modi will launch the seven new public sector undertakings (PSUs), created after the dissolution of the Ordnance Factory Board (OFB), later this week.

The 41 units which were functional under the OFB will be subsumed under one or the other of the seven new companies.

To provide funding for the operations of these new PSUs, the government has decided to convert all the intents placed with these factories into deemed contracts. Around 60 per cent of the annual price of the intents will be paid by the services, including the Indian Army and state police services, to the new DPSUs as mobilisation advance.

"Total number of such contracts numbering 66 have a cumulative value of more than Rs 65,000 crore," the Economic Times quoted an official as saying.

Avani Armoured Vehicles, with running contracts from the Indian Army for Arjun Mark-1A main battle tanks, will get the largest chunk at around Rs 30,025 crore, followed by Advanced Weapons and Equipment India Limited, which will get orders worth Rs 4,066 crore.

According to reports, Prime Minister Modi is likely to launch the new entities on Friday this week (15 October).

The dissolution of the OFB was the first step towards the corporatisation of its units to improve efficiency and quality and ensuring accountability.

Corporatisation of OFB will give the organisation a structure similar to that in the existing DPSUs, which are managed by their own board of directors with the government giving only broad guidelines, thereby providing greater autonomy and flexibility at managerial and functional levels.

Post corporatisation, the new entities will also be able to forge partnerships with defence manufacturers in the private sector, both domestic and foreign, like other DPSUs such as Hindustan Aeronautics Limited have done.

This would bring new hardware and technology to these units, helping them upgrade the existing infrastructure, which is outdated in many cases.