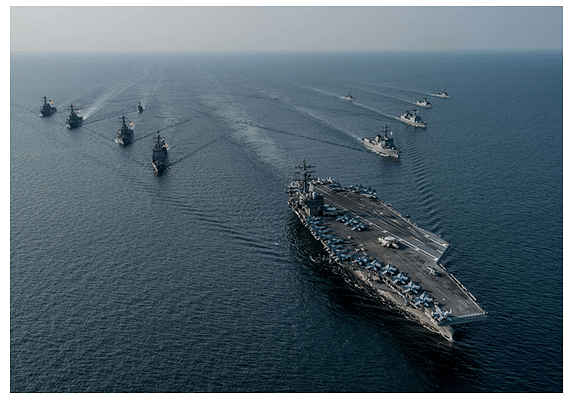 The United States Navy has organised one of its biggest ever naval power displays in the South-China sea, which have been interpreted as a clear challenge to China against the latter's territorial claims in the region, Wall Street Journal has reported.

As part of the US exercises, hundreds of jets, helicopters and surveillance jets took off from the USS Ronald Reagan and USS Nimitz aircraft carriers which were recently dispatched to the South China Sea by the US Navy. They were joined by a B-52 Stratofortress bomber which flew for 28 hours from Louisiana.

Additionally guided cruisers and destroyers which accompanied the aircraft carriers also took part in the drills to intercept threats for enhancing defensive capabilities.

"The purpose is to show an unambiguous signal to our partners and allies that we are committed to regional security and stability", Rear Admiral George M Wikoff has been quoted as saying.

China has termed these exercises as a provocation which violates its sovereignty and security interests.

In addition to these exercises, the US Navy regularly sails through the South China Sea to challenge Beijing's territorial claims and its bid to expand its regional sphere of influence.

These exercises come on the heels of Chinese exercises near the disputed Paracel Islands which are also claimed by Vietnam and Taiwan. China has already scaled up its military infrastructure on the island by building missile bases, radar facilities and an airfield.

China lays claim to almost 90 per cent of of the South-China Sea waters which have the potential of turning into a energy-rich resource. Its claims are countered by nations like Brunei, Malaysia, the Philippines, Taiwan and Vietnam.

China as a result has been accused of intimidating the smaller Asian nations, who too may want to exploit its oil and natural gas reserves.

These military exercises come at a time when China has been locked in a stand-off with India along the Line of Actual Control in Eastern Ladakh. With India refusing to cow down, Chinese troops have now moved back two kilometres from the spot where deadly clashes took place on 15 June in East Ladakh's Galwan valley.

China has also started a brutal crackdown in Hong Kong in lieu of its National Security Law which gives it sweeping provisions to curb dissent.

It has also scaled up its fighter jet activity near Taiwan and has been carrying out regular incursion. A few days ago Taiwanese jets had driven away one such Chinese aircraft.

A few Chinese officials have also targeted Russia over a territorial dispute which claims that the city of Vladivostok is an erstwhile Chinese territory.