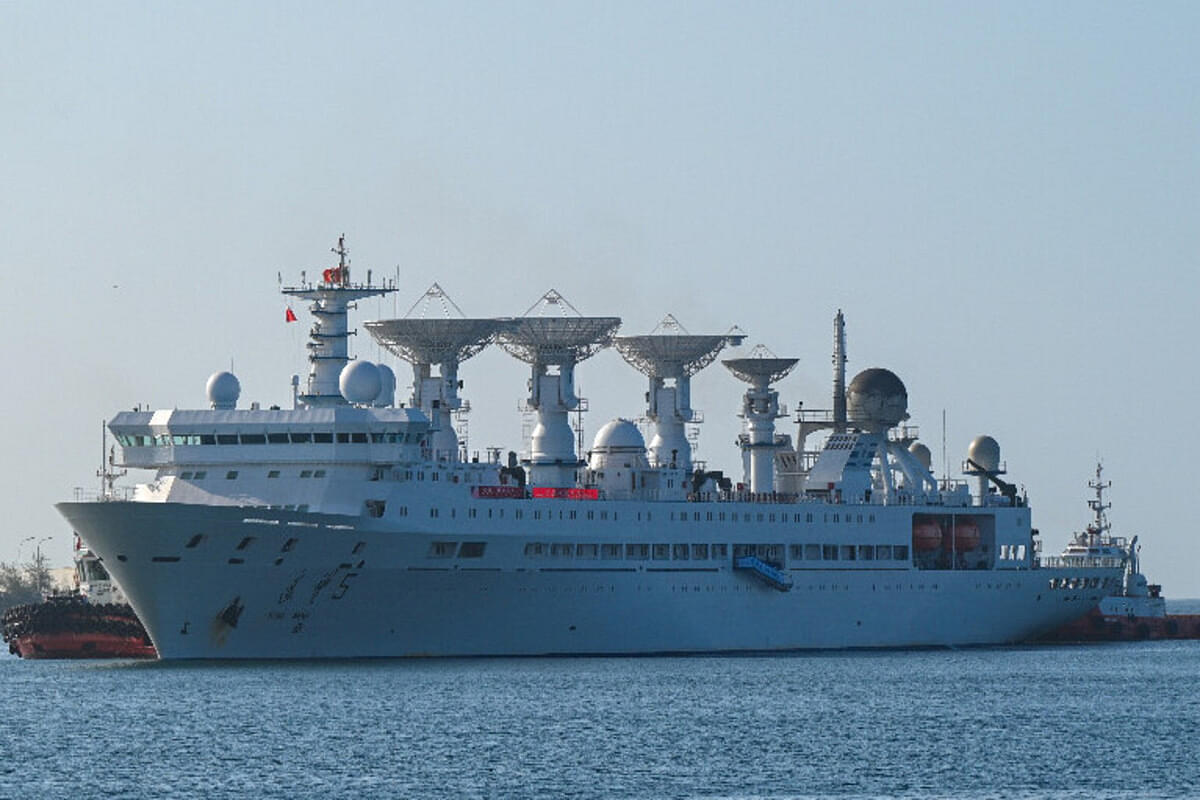 However, the debate this episode sparked, both in popular media and strategic circles, was largely limited to what it means for India-Sri Lanka ties, how Colombo has "betrayed" New Delhi and why India must rethink its economic assistance to an “ungrateful" Sri Lanka.

A dispassionate debate on how this episode must shape India's response to the crisis in Sri Lanka going forward will be useful. But it won't answer a critical question — what was China trying to achieve or signal with the docking of the spy ship at Humbantota.

For this, the deployment of the ship must be seen in the context of China's Indian Ocean strategy and its actions in the region in recent years.

Over the last decade, China's massive investments in the Indian Ocean Region (IOR) have enabled it to expand its presence in littoral states.

It has created stakes with investments in ports and other infrastructure in the region, from Myanmar, Sri Lanka and Pakistan in the west to Kenya, Tanzania and Mozambique in the east, and in the many islands dotting the vast ocean between.

In East Africa, where it also launched its first foreign military base in Djaboti in 2017, China has investments in at least 17 ports, giving it a robust presence in the western Indian Ocean.

Similarly, closer to India, China has invested in infrastructure, including ports in Sri Lanka, Pakistan and Myanmar, and has taken over on lease the ones it has built in the first two. It is currently building a base in Cambodia, on the edge of eastern Indian Ocean, and the likelihood of another base on the eastern coast of Africa in the next five to 10 years can't be ruled out.

In the process, China has created dependency and has shown the willingness to weaponise it, as seen in the case of Sri Lanka most recently, but also in the Maldives in the recent past.

With relentless expansion of its presence, China has built considerable political influence and economic leverage in the region. This has shrunk India's space for manoeuvre and intensified the tug of war for influence, visible not just in Sri Lanka and the Maldives, but also elsewhere in the region — most recently in Mauritius.

As demonstrated by the docking of Yuan Wang-5 in Sri Lanka despite India's concerns, Beijing now has the ability, even if limited, to push for outcomes it desires.

The increase in the presence of the People's Liberation Army Navy (PLAN) in the IOR has kept pace with China's growing investments and influence.

It was no surprise that a Yuan-class diesel electric boat of the PLAN was in the region at the peak of the standoff with India in Bhutan's Doklam in 2017. PLAN submarines, including nuclear-powered boats or SSNs, have docked in Pakistan and Sri Lanka in recent years.

Moreover, recent developments at China's base in Djibouti suggest that the facility is being prepared to dock submarines and aircraft carriers.

China's upcoming base in Cambodia will enable the PLAN to maintain greater presence in the eastern Indian Ocean, including India's near-seas — the Bay of Bengal, the only part of the Indian Ocean from where an Indian ballistic missile submarine or SSBN can currently launch a nuclear strike against China, and the adjoining Andaman Sea.

At the same time, China has consistently deployed survey or research vessels capable of bathymetric studies — mapping the depth of the ocean floors, studying the ocean environment and collecting hydrological data.

For instance, in January 2021, two Chinese survey vessels were spotted in the Indian Ocean, south of the Andaman and Nicobar Islands, surveying large swaths of the ocean around the Ninety East Ridge in a lawnmower pattern.

This uninterrupted stretch of relatively shallow water, where submarines are prone to detection, is close to the Indian Ocean chokepoints such as the Sunda and Lombok straits, which Chinese warships and submarines use to enter the Indian Ocean.

In September 2019, India had spotted a Chinese research vessel in its exclusive economic zone around the islands, just west of Port Blair, operating without permission, and expelled it.

In 2017, Admiral Sunil Lamba, the Chief of the Naval Staff at the time, had said that there about six to eight "PLA Navy ships" in the Indian Ocean at any given time, including three to four "survey and satellite control ships."

Since 2020, the Indian Navy has "monitored" at least 53 "satellite and ballistic missile tracking vessels" in the Indian Ocean.

The data collected by China's research vessels in the Indian Ocean can be used for both operating submarines in the region and detecting enemy undersea platforms deployed in these waters.

By investing in port infrastructure, building economic leverage and influence, deploying warships to the region and collecting bathymetric data, China is trying to put in place the pieces necessary for an increased PLAN presence in the Indian Ocean over the next decade.

Investing in ports across the region aids in the creation of facilities that the PLAN could use in the future. Not all of China's investments will translate into basing arrangements, but even a small number of such facilities would significantly enhance China's ability to project power.

It will allow PLAN to sustain deployments in the IOR, not just during peacetime but also, to a limited degree, during times of heightened tensions or conflict.

Deploying naval platforms, including nuclear-powered submarines, gives the PLAN the experience of operating in areas far from home waters. The survey of the seabed supplies the data critical for undersea operations, including the deployment of submarines in India's near-seas.

Looked at in this context, the docking of Yuan Wang-5 at Hambantota, which Beijing has taken over from Colombo under a 99-year lease, appears to be an attempt to set a precedent as China tries to carve out, incrementally, more space for itself in the Indian Ocean Region.

Also Read: How India’s Military Base On Mauritius’ Agalega Island, Shrouded In Secrecy, Is Taking Shape