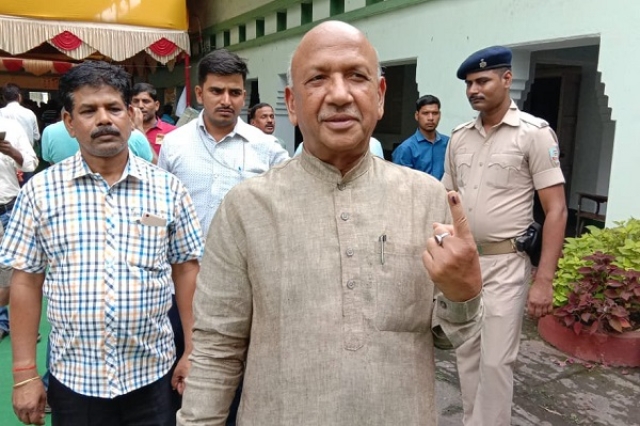 Rai, a two-time MLA from the neighbouring Jamshedpur West seat, resigned as Food and Civil Supplies Minister from the Raghubar Das cabinet after being denied a ticket from his seat. Das was instrumental in getting the party to deny a ticket to his cabinet colleague.

Rai, an anti-corruption crusader, who is believed to have been instrumental in the convictions of Lalu Prasad Yadav in the fodder scam and former Jharkhand CM Madhu Koda in the mining scam, has charged Das with corruption. He says he has proof of corruption against Das.

Rai has been a critic of Das and has been complaining to the BJP central leadership about many irregularities being committed by the Chief Minister.

He claims he had written to the party leadership of Das’ corruption in hiring a Singapore-based firm to prepare a project report on sewage treatment in Ranchi in 2005 when Das was the urban development minister.

Rai had also opposed the granting of mining leases without following procedures to some companies, by Das, and had spoken out against irregularities in appointments to government posts and in some welfare schemes. He blames Das for all these irregularities.

Irked by constant criticism of his actions by Rai, Raghubar Das and his supporters had complained to the party central leadership over what they say was Rai’s attempt to malign the image of the party. They influenced the party leadership to deny Rai a party ticket to contest the polls.

But Rai has a very clean image and enjoys a robust reputation as a corruption-buster. The widespread perception that he was denied a party ticket since he was protesting against corruption within the BJP, especially by Chief Minister Das, will definitely tarnish the party’s image severely.

Rai was with Lalu Yadav in the Janata Dal when that party came to power in Bihar in 1990, but when Rai spoke out on alleged corruption in the party, Yadav lashed out at him in public. Rai then joined the BJP with help from his friend Govindacharya.

Rai’s proximity to Bihar Chief Minister Nitish Kumar — both were classmates at Patna Science College — had also irked some in the BJP. When the JD(U) and the BJP split in 2013 and some BJP leaders alleged Kumar’s involvement in the fodder scam, Rai defended his friend. This upset many in the party and a whisper campaign that he was a JD(U) mole in the BJP was launched against Rai.

But Rai, concede many in the BJP, can turn out to be a dangerous enemy. He has the reputation of relentlessly pursuing those he believes to be corrupt and not only has a keen eye in detecting anomalies, but also has ‘deepthroats’ in government departments who provide him documents that could incriminate BJP ministers.

That is why even Subramanian Swamy tweeted in Rai’s favour a few days ago and urged the party leadership to bring him back and make him the chief minister.

Post-election, Rai can be the galvanising factor for BJP allies like the All Jharkhand Students Union (AJSU) and Lok Janshakti Party (LJP), which are contesting the polls separately (and not in alliance with the BJP) to join an anti-BJP front.

The JD(U) and the Jharkhand Mukti Morcha (JMM), which is heading an alliance comprising the Congress and the RJD), are supporting Rai in Jamshedpur East.

This emerging bond between Rai and the JMM, as well as the JD(U)’s support to Rai and the latter’s good equations with the LJP and AJSU, can spell deep trouble for the BJP.