The Mamata Formula: A Drama A Day To Give The Media Its Hay 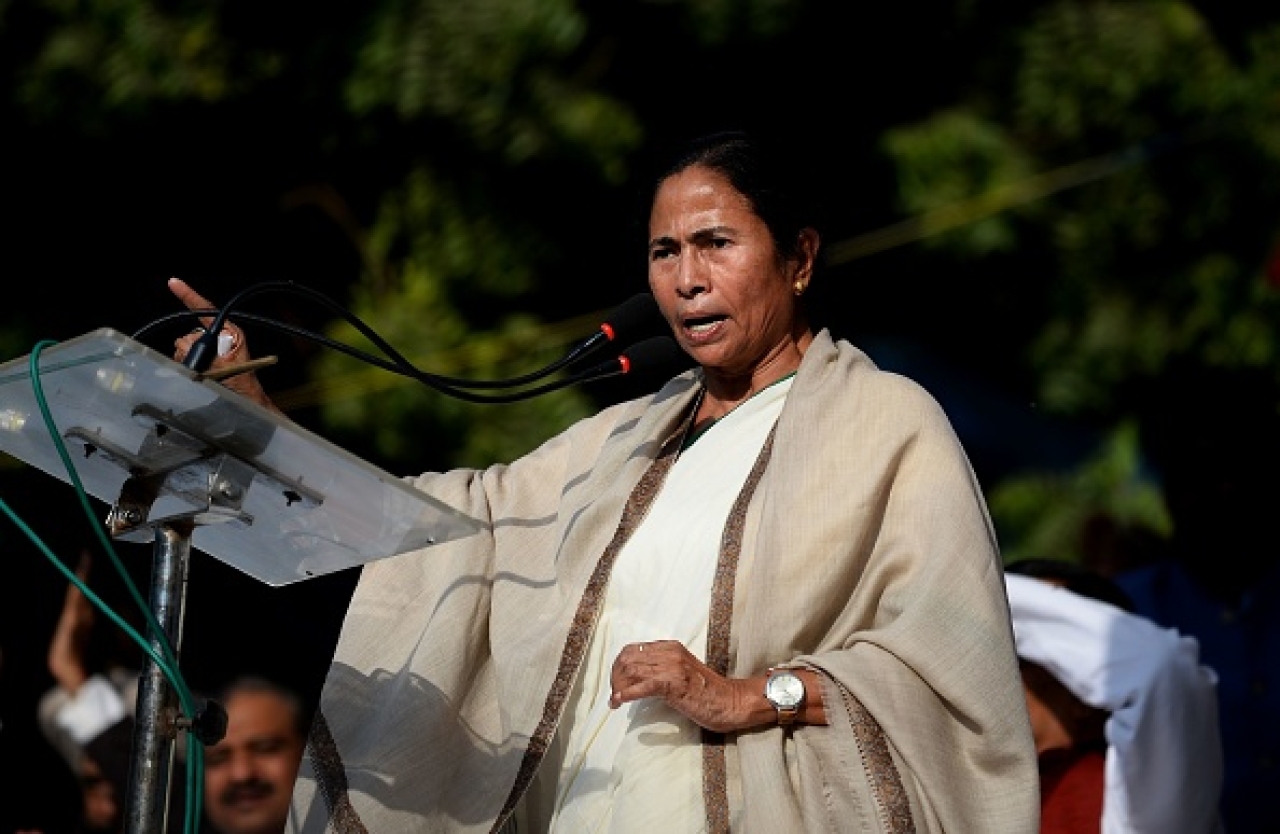 After all the embarrassment she suffered in New Delhi, Lucknow and Patna over the last few days (read about it here) that would have definitely punctured her bloated ego, Bengal Chief Minister Mamata Banerjee has hit on a new formula to keep media attention focused on her. The formula is: stage a drama every day to garner all the attention she can get.

It doesn’t matter that these dramas, replete with her angry accusations and allegations and playing the victim card, are sans any basis, logic, reasoning and don’t stand any scrutiny. For those few hours, she would have got the attention of the pliable mainstream media and that is all she cares about. Truth and facts be damned.

On Wednesday evening, Mamata and her minions raised hell after landing in Kolkata from Patna. They alleged that the IndiGo flight that they (Mamata and some of her senior aides) had taken from Patna was denied permission to land in Kolkata and was kept hovering over the airfield for nearly 40 minutes before the pilot sent an SOS, saying he was running low on fuel. Mamata’s senior aide Firhad Hakim (exposed in the Naradha sting) said that the whole thing was a conspiracy to eliminate Mamata by engineering a plane crash.

The facts are completely different and a dispassionate perusal of them as brought out in this - Times Of India report would give a total lie to the motivated and baseless allegations by Mamata and her men. The IndiGo flight was scheduled to take off from Patna at 6.35 pm on Wednesday and land at Kolkata at 7.35 pm. But it took off at 7.36 pm and landed in Kolkata at 8.40 pm; it was thus in air for only an extra four minutes.

Most airlines add a buffer of about 15 to 20 minutes in the total duration of the flight in order to account for contingencies like hovering over busy airports for some time before they land. Thus, while actual flying time between Patna and Kolkata is around 40 minutes, IndiGo shows the duration of the flight as one hour that allows it to claim “before-time arrival” or arrival “on schedule” on almost all days.

The pilot of the IndiGo aircraft contacted Kolkata Air Traffic Control (ATC) at 8.24 pm (that is, 48 minutes after taking off from Patna) saying that he had eight minutes of fuel left and if he was not given permission to land, he would have to divert the aircraft to Bhubaneshwar (which is the scheduled airport to land in case of diversion from Kolkata). Bhubaneshwar is 40 minutes’ flying time away from Kolkata and the IndiGo flight 6E 342 even had an extra few more minutes of fuel available if it had to hover over Bhubaneshwar before landing clearance. In all, said IndiGo, the aircraft had enough fuel to stay in air for at least 80 minutes at 8.24 pm.

IndiGo claimed the Kolkata air traffic control officer (ATCO) misinterpreted the pilot and assumed that the aircraft had fuel to last only eight minutes. The ATCO thus set in motion the full emergency protocol of stationing fire tenders and ambulances next to the runway and gave the IndiGo aircraft priority clearance to land immediately. IndiGo maintained that its pilot had never said he had only eight minutes of fuel available and had not declared any fuel emergency.

“The pilot’s remarks to the ATC were misunderstood and he did not suggest he was running precariously low on fuel. The pilot operating 6E 342 had advised the ATC that he had eight minutes of extra holding fuel over Kolkata before commencing diversion to the planned alternative,” said the airline in a statement.

Airports Authority of India (AAI) said that the IndiGo pilot’s message was not misunderstood by the ATC and an Air India aircraft that was ahead of the IndiGo flight’s landing sequence and had three minutes of holding fuel (after which it would have to divert to Bhubaneshwar) was given clearance to land before the IndiGo aircraft, implying that the IndiGo aircraft’s landing was not an emergency landing. As for the ambulances and fire tenders lined up beside the runway, AAI explained in its statement that they were on standby since visibility at that time was below normal.

Thus, what clearly happened was a miscommunication between the ATCO and the IndiGo pilot. At no time was the aircraft running dangerously low on fuel and was never forced to hover over Kolkata for 40 minutes. There was no danger at any time to Mamata Banerjee or any of the 173 other passengers and crew. These are the unalloyed facts.

But Mamata and her men continue to cry foul. Sadly, even after learning the facts of the case, they chose to gloss over them in the hope of making political capital out of a falsehood. Her MPs shouted their lungs out in the Lok Sabha and Rajya Sabha on Thursday over this, and were unfortunately supported by other opportunistic political parties.

The next drama, which is still being played out now, is even more bizarre. Mamata suddenly called a press meet on Wednesday evening at Nabanna, the new state secretariat, and alleged that the Union Government had asked the army to mount surveillance on her! As proof, she held up the presence of a team of army jawans and junior commissioned officers (JCOs) at the toll plaza gate of Vidyasagar Setu, which is about half a kilometer from Nabanna. The army team, she said, was checking vehicles as part of the surveillance it had mounted on Bengal. She alleged that the surveillance was nothing short of a “war” declared on Bengal for her strong opposition to demonetisation drive.

The facts of this case, as has been countered in a point-by-point rebuttal of Mamata’s fantastical allegations by the army, are totally at variance with what Mamata said. The army deploys teams twice or year, or even more often if the situation demands, on important highways across the country to carry out a survey of all commercial goods carriers. “The teams take a count of all such (goods) vehicles on the highways with their registration numbers and other details as well their make and load-bearing capacities. The objective of this exercise is to have an updated and ready list of vehicles that can be requisitioned for movement of troops and equipment in case of an emergency” defence spokesperson in Kolkata, Wing Commander S.S.Birdi, said.

This exercise, said the defence spokesperson, is going on in many other states of eastern and northeastern India. Moreover, giving the lie to Mamata’s (false) assertion that the state government was kept in the dark about what she termed “army deployment”, Wing Commander Birdi said that permission for this exercise stretching over three days was sought from the state police for 28 to 30 November . But the police requested the army to carry on the exercise from 1 December , he said.

The defence ministry said that this exercise is currently on in 18 places in Assam, 13 places in Arunachal Pradesh, 19 places in West Bengal, six in Manipur, 5 each in Nagaland and Meghalaya and one each in Mizoram and Tripura. “This exercise is carried out in all states and is a vital one. The army does not have enough carriers of its own to move troops and equipment in case of an emergency and requisitioning civilian vehicles becomes necessary. We need to have a ready and updated database of such civilian goods vehicles for advanced logistics planning. If we don’t know how many civilian goods carriers are available, their registration numbers and other details like ownership etc, as well as their carrying capacities, we will not be able to respond immediately in case of an emergency” explained a senior army officer, adding that this exercise is carried out by the army QMG (quartermaster general) branch, which is the army’s logistics wing.

There is, thus, no way Mamata would have been unaware of this exercise. Even if she were, the state police would have known for sure. It was thus incumbent on the state police chief to have told Mamata about it. Perhaps he did, but Mamata, sensing that she could twist facts to manufacture a good conspiracy story and stage a drama, ignored him. Mamata went on to declare, very dramatically, that she would not leave Nabanna till the army was withdrawn from the highways. She would stay put at Nabanna, she said, “to guard democracy”! It appears she spent Thursday night at Nabanna (and it is another matter that Nabanna would have offered her more comforts than her own home in a south Kolkata slum)!

This ‘sentry’ of democracy--and forget the fact that she is most intolerant, undemocratic and dictatorial herself--alleged that the Union government was pushing the country towards a civil war and that this was another instance of the Modi government transgressing on a state’s domain. Never mind that the reality is something totally different and the facts don’t support her allegations. For Mamata, facts don’t matter as long as she can sell a drama to the media perpetually on the lookout for sensationalism. Mamata ensures them an endless supply of sensational dramas that are based on utter falsehoods and sinister twisting of facts. The mainstream media simply regurgitates them faithfully without doing a fact or reality check.