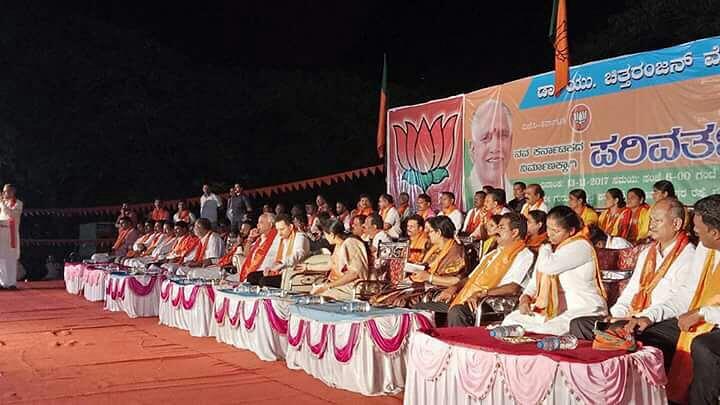 The initial leg of the Bharatiya Janata Party's (BJP’s) Parivartane Yatre (rally for change) in Karnataka, under the leadership of former chief minister B S Yeddyurappa, has yielded an interesting insight into what the party would hope to be a winning formula, at least in some parts of the state. Yeddyurappa and the BJP leaders accompanying him have used a combination of Hindutva and development to woo voters and so far it seems to be working.

The BJP has been helped in this endeavour by the Congress government’s sectarian policies like the discriminatory Shadi Bhagya Scheme, which gives taxpayer money exclusively to below poverty line brides from minority communities, disproportionately funding minority social and religious institutions whilst harassing those belonging to Hindus, disproportionate increase in grants to minorities for irrigation investments, scholarships and more.

The openly pro-Muslim rhetoric of Congress leaders and backing for celebration of Tipu Jayanti despite Tipu Sultan being widely seen by the Hindu populace as a mass murderer of Hindus, and the actions of the Karnataka Pradesh Congress Committee (KPCC) president G Parameshwara, who encouraged Muslims, to take loans from the government to default – with the reasoning that it is a part and parcel of the development process – have only made the political conditions more fertile for a pan-state Hindu consolidation.

To the surprise of most observers of Karnataka’s politics, the yatre consistently drew good crowds in every assembly constituency it passed through in Hassan. This wasn't restricted to Hassan City and Arsikere, two taluks in the district with a fairly long history of communal violence, enabled by the Congress party's vote-bank securing tactics. A Hassan Janata Dal (Secular) leader was able to give a convincing explanation for this phenomenon:

Over the past four-and-half years, the Congress in this district (and elsewhere) has continuously supported the minority community in disputes during Ganapati visarjan processions, village festival processions and more. A significant section of the people have had it with both the major parties in the district – JDS and the Congress trying to appease a certain minority community one way or the other. With the BJP using the Tipu Jayanti celebrations to make the appropriate noises, the Hindus of the district who are disappointed by the bipartisan minority appeasement are increasingly consolidating behind the BJP.

In hindsight, the good public response to the yatre in Hassan was just a preview of what was to come in the Karavali districts – Dakshina Kannada (eight seats), Udupi (five seats) and Uttara Kannada (six seats). The yatre went directly to Dakshina Kannada after being forced to skip Kodagu as the Siddaramaiah government refused permissions in light of the Tipu Jayanti celebrations.

The Karavali – Some Political Background

In the rush to brand the BJP as casteist, they ignored the fact that the party won only four out of eight constituencies in Dakshina Kannada and two out of six constituencies in the 2008 election despite there being a wave in favour of the party. The only drastic decline was in Udupi, where they were reduced from four seats in 2008 to only one in 2013 (two if you include the Karnataka Janata Paksha aligned Halady Srinivasa Shetty in Kundapura).

The BJP’s failure to retain 2008 levels of support does have an explanation in the fact that the election rhetoric of the party in this region in 2013 was to a large extent dominated by Hindutva themes. However, the BJP MLAs failed to bring forward any noteworthy development initiatives. This, in turn, fed the anti-incumbency sentiment (against the BJP, which was in power in Karnataka in 2013).

Moreover, the local elites of the Congress, be it Abhayachandra Jain in Moodbidri, Ramanath Rai in Bantwal, Mohiuddin Bava in Mangalore North, Gopala Poojary in Byndoor, R V Deshpande in Uttara Kannada and Sharada Mohan Shetty in Kumta gave a good fight on the basis of their existing record of performance.

The state BJP, lead by Yeddyurappa, seems to have learnt its lesson from Prime Minister Narendra Modi’s 2014 election campaign and is actively using development oriented rhetoric along with the usual and necessary Hindu mobilisation. The killing of Hindu activist Sharat Madivala in Bantwal (Dakshina Kannada) by PFI-associated terrorists as well as the exuberant Tipu Jayanti celebrations, despite Tipu’s widespread atrocities committed in this region, had already contributed to an increase in the anti-Congress sentiment. All along the Karavali leg of the yatre, Yeddyurappa highlighted Siddaramaiah’s inability to control such elements in Karnataka and prevent the killings of Hindu activists, in addition to talking about the Congress government’s failure to enable development in the region.

The yatre entered Dakshina Kannada through Sullia, a constituency held by five-time MLA S Angara. This stretch perhaps became a personal show of strength for the sitting MLA, who gathered about 4,000 people just to welcome the yatre and travelled along with it to the venue of the event in the assembly constituency. This trend continued in other constituencies of the district with the size of the crowds and the welcome bike rallies and padayatris steadily increasing.

In Bantwal, the Bunt bastion of District In-charge Minister Ramanath Rai, the yatre received a big welcome from supporters on 350 bikes, despite Rai trying his best to cause the yatre to fail. Mangalore too saw a repeat performance in terms of crowd size. The internal bickering of the Congress also seems to have helped the BJP increase its strength in the district with Harikrishna Bantwal, a close associate of Janardhan Poojary joining BJP. Poojary, the ailing ex-KPCC president is one of the few openly anti-Siddaramaiah voices within the state Congress party.

In Udupi, the district where the BJP suffered the heaviest loss in 2013, the yatre succeeded in creating a buzz about the party’s resurgence. The yatre managed to get a decent crowd of 7,000 in Karkala, 11,000 people in Udupi, 9,000 in Byndoor and more than 10,000 people in Kundapura.

Interestingly, around this time, rumours started spreading in the Kannada media that Pramod Madhwaraj, District In-charge Minister of Udupi and son of ex-BJP MP Manorama Madhwaraj may join the BJP. This came in the background of Pramod Madhwaraj skipping the Tipu Jayanti celebrations in the district, an indication of the prevailing sentiment in the region.

In Kundapura, the bastion of the Bunt strongman, three times BJP MLA and current Independent MLA Halady Srinivasa Shetty was formally announced by Yeddyurappa as the party’s candidate in the constituency. In Kundapura, Yeddyurappa made what might go down as the most striking statements in the run up to the 2018 elections – "I won't let this place become another Mallapuram". Almost as a rule, every speech made by Yeddyurappa as well as other leaders like Anant Kumar Hegde featured elements of both Hindutva and development issues.

The Uttara Kannada stretch of the yatre begun with a massive 12,000 people assembling in Bhatkal. While about 10,000 people each had assembled at Kumta
and Karwar, around 7,000 people turned up at Sirsi. In Yellapur, around 6,000 people came to hear Yeddyurappa, while more than 8,000 people were mobilised in Haliyal, a stronghold of the District In-charge minister and senior Congressman R V Deshpande. He has been winning this seat continuously since 1983, having lost only once in 2008 to Sunil Hegde (ex-JDS and now in the BJP).

Ananth Kumar Hegde was a prominent presence in the entire Uttara Kannada stretch of the yatre with the crowds as usual responding positively to his oratory. The party as a whole continued to follow the Hindutva plus development rule with Yeddyurappa and Anant Kumar Hegde talking about Siddaramaiah’s government foisting false cases on BJP and other Hindu karyakartas while also talking about development related issues of the district.

BJP’s Re-Emergence In The Region

While the BJP will face an extremely tough fight in the Dakshina Kannada district, its prospects are increasing in Udupi and Uttara Kannada as well. The strategy that the party is following to enable Hindu consolidation in its favour is different from the one it had used repeatedly in the previous assembly elections. The 2017-18 version of the strategy to bring about Hindu consolidation in the region involves BJP leaders using a ‘Hindutva plus development’ narrative.

The long political career of Yeddyurappa and the relationships that he has built along the way have helped him bring a lot of strong leaders into the party – be it Jayaprakash Hegde and Halady Srinivasa Shetty in Udupi, Sunil Hegde in Uttara Kannada and Harikrishna Bantwal in Dakshina Kannada. Anant Kumar Hegde’s fiery Hindutva rhetoric is supplementing Yeddyurappa’s political moves by energising the Hindutva base of the party. The yatre has entered Belgavi district and has begun to draw bigger crowds – almost 25,000 in Arabhavi and 35,000 in Gokak.

The Dharma Sansad being organised in Udupi between 24 and 26 November by the Pejawar Seer and Dharmasthala Dharmadhikari Sri Veerendra Hegde will see top leaders like Yeddyurappa and Yogi Adityanath participating. It will be the culmination of a successful phase of election campaigning for the BJP, which has seen the party re-emerge as a force to be reckoned with in the region as well as the state.