Alliance of Secularism Or Convenience? Close To 60 Per Cent Of JD(S) MLAs Defeated Congress Candidates For Their Seats 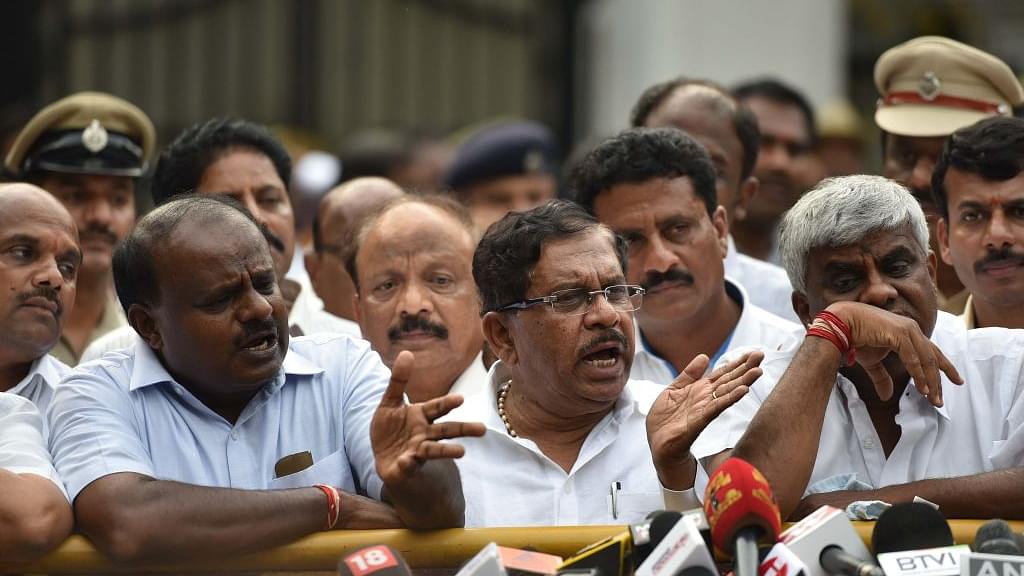 The Governor of Karnataka, Vajubhai Vala, appointed B S Yeddyurappa, the leader of the Bharatiya Janta Party (BJP) legislature party in Karnataka, as the Chief Minister of the state. He had earlier been given 15 days to prove his majority on the floor of the House, but now, after the Supreme Court’s verdict, would have to do it on 19 May itself. The Congress approached the Supreme Court in the wee hours of Thursday and the CJI constituted a three-3 member bench which heard both the sides till the morning.

To an observer of the the recent Assembly elections, the decision of the Congress and Janata Dal (Secular) (JD(S)) to form an alliance looks dishonest. Here’s why.

The JD(S) and Congress have been principal opponents and share a history of antagonism, 57 per cent MLAs of the JD(S) won against Congress candidates. The state has witnessed direct contest between JD(S) (and its predecessors) and Congress from 1978 to 2004. The two parties have taken turns to form the government for two-and-a-half decades in the state. In 2004, in a hung assembly situation, the Congress and the JD(S) formed a post poll alliance which lasted for only two years. There was severe tension in this alliance which impacted the performance of the government.

The truncated Janata Dal, rechristened as JD(S) in Karnataka, is now reduced to just one pocket of influence--Old Mysuru. The Congress and the JD(S) have been locked in a keen tussle in this region. Even in this election, JD(S) won 28 (>70 per cent of its seats), in Old Mysuru, majority of them against Congress candidates.

Apart from this, JD(S) and Congress attacked each other vigorously during the campaign. During a campaign speech, this is what Rahul Gandhi had to say about the JD(S): “The ‘S’ in JD(S) no longer stands for ‘Secular’. It now stands for ‘Sangh Parivar’. The JD(S) is actually Janata Dal Sangh Parivar.”

Chief Minister Siddaramaiah also joined in: “The JD(S) has no morality or ethics. Under Gowda’s son HD Kumaraswamy, it has become a ‘vote cutting’ party. They have an understanding with the BJP.”

JD(S) gave it back in equal measure calling Rahul and Siddaramaiah “hypocrites who had once dined with the same Gowdas". “Is he saying that he is the only clean person around? Let Rahul Gandhi send me his soap. I will use the same to take bath. In 1994, as Chief Minister I had resolved the Idgah dispute at Hubli. Where were Congress people then?” asked JD(S) supremo Deve Gowda.

The alliance of Congress with JD(S) is unethical. How come, and why, has a party (Congress) which has twice the number of seats (78) than the smaller regional player JD(S) (38) agreed to relinquish the CM chair for Kumaraswamy? Not only seats, the Congress has twice the vote share of JD(S). What is driving the Congress to do this? What will the JD(S) MLAs say to the people of their constituencies? People voted against Congress and for JD(S) in 22 seats. Do these voters want JD(S) to align with the Congress?

If that is not enough to convince anyone, let us look at what happened across the state.

The seats of Congress have declined by 36 per cent from 122 to 78. At the same time, the BJP tally has more than doubled from 50 to 104. Across all regions, the BJP has gained seats compared to the 2013 elections while Congress has lost seats. On a 144 seats, people have voted against the Congress (104 BJP, 38 JD(S)+, 2 Others). Moreover, 16 ministers of the previous Congress government lost the elections and CM Siddaramaiah himself lost the Chamundeshwari seat comprehensively by 36,042 votes while scraping through on other, Badami, by 1,696 votes. The outgoing Speaker, Krishnappa Koliwad, too lost in his seat.

Some people suggest Congress has a higher vote share than BJP so it’s wrong to say it has lost the mandate. India, however, follows a first past the post system. Even in 2008, when BJP formed the government in Karnataka, it had a lower vote share than the Congress. So this logic doesn’t hold good.

In the end, there are two questions related to the Governor’s decision – one is of ethics and other legality. The question of ethics point will be decided by the society. Even ardent supporters of Congress would agree that it is unethical to forge an alliance with JD(S) just to remain in power. The question of legality can be determined only by courts and not the society.

To sum up, in a situation where the assembly is not severely hung and the deficit is less than 4 per cent of house strength, and given the huge mandate against Congress, it was prudent of the Governor to invite the BJP to have the first shot at government formation. If the party fails to prove majority on the floor of the house, then the Governor will explore other options and give the JD(S)-Congress alliance a chance. And that will only be fair.