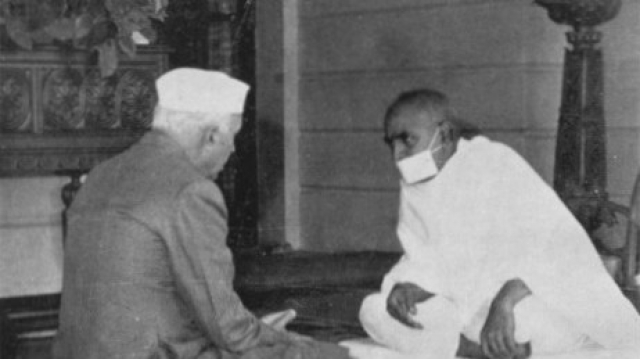 There is a furore over Smriti Irani visiting an astrologer. But so did Nehru, that epitome of rationality, in times of stress, and at taxpayers’ expense!

So Smriti Irani visits an astrologer and that becomes a news. Heated debates erupt on how she has violated her constitutional obligation of ‘scientific temper’. Leave alone the fact that the very term was sneaked into the Constitution during that glorious darkness at noon period of Indian democracy—Emergency, the lamentation exhibited by the Marxist and Nehruvian intellectuals and media suddenly reaches hysterical proportions.

The HRD minister did not visit the astrologer as part of any policy making process. Nor has she made any governmental decision to introduce astrology as a compulsory subject. It was a purely personal visit with her husband on a Sunday. Yet Congress Party spokesperson Archana Sharma went for the jugular, saying that Irani, as “someone donning the portfolio of an HRD minister should have abstained from visiting an astrologer to know about the future.” She further stated that If the HRD minister gives importance to destiny rather than labour, the country’s youth would be misled.

The Times of India added in the same report that the visit “sparked a debate on whether the Union minister for premier institutions like IITs and IIMs should be promoting scientific thinking or superstition.”

What about that paragon of scientific temper—the eternal granddad prince of all things rational in India—Pandit Jawaharlal Nehru himself?  Walter Crocker, the former Australian High Commissioner to India, in his book Nehru : A Contemporary’s Estimate, informs his readers that Nehru had “no sympathy for Gandhi’s religion”, and goes on to say that Nehru “hated many of the things which most HIndus hold dear—cow worship, subordinate status for women, temples, sadhus, astrology and caste.” Crocker adds that Nehru remained “remarkably consistent in these aims, as his Bunch of Old Letters shows”.

So Smriti Irani had violated the scientific temper as laid down by Nehru, one of the founding fathers of modern India.

But wait…In Nehru’s Letters to His Sister, edited by Krishna Hutheesing, check letter numbered 74, written on 29.8.1944. Here Nehru says that he had written to his daughter Indira to make a “proper horoscope” of his grandson (Rajiv) by “a competent person”!

Curiously enough, this letter is omitted in the compilation of letters published by the Publications Division, Government of India!

Then, in a communication by the private secretary to the Prime Minister, the editor of Astrological Magazine, Bangalore, it was stated: “The Prime Minister has asked me to write to you that, so far as he knows, the time of his birth was 11.30 p.m. on November, 1889.” Private secretaries to Prime Ministers are paid with taxpayers’ money for many services but sending the Prime Minister’s exact time and date of birth to astrological magazines surely cannot be one such service. Nor can one think of any “scientific” reason for such a service rendered by the secretary on explicit orders from PM himself!

Durga Das was a journalist and freedom fighter. His book  India From Curzon To Nehru and After comes with a foreword from none other than Zakir Hussain, former President of India. In his book, Das relates a rather interesting episode. Some time before the Indo-China war in 1962, Nehru allowed himself to be persuaded by Gulzari Lal Nanda, the Planning Minister, to show his horoscope to an astrologer. But he flew into a rage (scientific temper?) when the astrologer told him that he would have to face an attack from China that very year. Of course, one wonders whether one really needed star charts and astrologers to predict that. Dr Ambedkar, Sri Aurobindo and Sardar Patel had predicted a Chinese aggression years before it happened. But for Nehru, it needed an astrologer to warn him. Yet, independent India’s first Prime Minister, with his scientific temper rising, shouted: “This can never happen! You are talking bilge!”

Durga Das continues: “Not many weeks after the Chinese launched their aggression, Nehru was in a mood to listen to astrologer. But the pundit’s words were hardly comforting. Nehru’s life span was over, he pronounced. Only puja (ritual worship) could prolong it. What followed was shrouded in the utmost secrecy.” Once again, Nehru, that epitome of scientific temper, had allowed himself to be persuaded. Every evening after the rituals, Brahmin priests came to the Prime Minister’s residence and placed an auspicious tilak mark on his forehead. Of course, hagiographers inform us that Nehru, ever rational, was simply suffering it all to satisfy his well-wishers.

The present writer is no believer in astrology. To this writer, astrology is more an effective traditional counseling tool than a predictive science. It would be really interesting to study the phenomenon of astrology and soothsaying as a social-psychological phenomenon rather than introduce astrology as a science in academic curricula.

But one does know that uncompromising scientific attitude is not the monopoly of people who publicly extol the scientific temper and in private consult astrologers.

In 1967, during the General Elections, some senior Jan Sangh leaders wanted to consult astrologers. Jagadish Prasad Dwivedi, a senior Jan Sangh leader, recollects in the 1972 memorial compilation on Pandit DeendayalUpadhyaya : “It was necessary to cast the horoscope of the Jan Sangh for the purpose and I was asked to collect information as to the exact timing of the founding of our party. I contacted Bhopal Jan Sangh office. Kailash Sarang there expressed his ignorance but said Deendayalji himself was to visit the place in a couple of days…When I told Pandit Deendayal Upadhyaya the purpose for which I wanted the information he said, “We are men who believe in work and our own efforts. It is harmful to put one’s trust in astrology.”

What Smriti Irani did on a Sunday was a pay personal visit with her husband to a soothsayer. There is nothing official about it. Making an issue out of it is typical of pseudo-secular tactics and an intrusion into one’s personal life in the rudest way. If going to a soothsayer on a Sunday is unscientific, so is going to a clergyman on any day for confession.

Predictive astrology is most probably a pseudoscience.  At best, it may be a counseling tool. Let no political party in India make an ideological baggage or beating stick out of astrology. And when we say astrology is pseudoscience, let not our comrades of Marxist persuasion forget that Karl Popper, the great philosopher of science, who categorized astrology as pseudoscience, also classified Marxism as the same. But then, astrology in its history of thousands of years, never massacred millions of people as Marxism did in just 70 years.