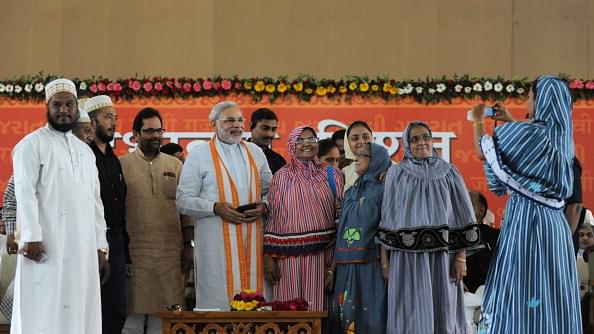 The number of minority students receiving scholarships under the ‘Nai Udaan’ scheme has doubled in the last couple of years under the government of Prime Minister Narendra Modi.

Under the scheme, the Ministry of Minority Affairs provides a stipend of Rs 1,500 to local students and Rs 3,000 to outstation students respectively.

This information was given by Mukhtar Abbas Naqvi, the Minister of State for Minority Affairs, in a written reply to a question raised in Rajya Sabha.

According to the minister, the number of beneficiaries from various minority groups has increased by a huge number after the Narendra Modi government came to power.

The government may try to project it as an achievement of its Sabka Saath, Sabka Vikas policy. However, we should call it what it is: blatant discrimination in education on the basis of religion.

Naqvi also said the government has announced scholarships to 48,000 girls belonging to the minority community under the ‘Begum Hazrat Mahal National Scholarship for Meritorious Girls’ through the Maulana Azad Education Foundation (MAEF), established and fully funded by the ministry for the education of minorities.

The scholarship is one of three schemes announced exclusively for women belonging to minority communities last month. The other two are the ‘Nai-Roshni for Leadership Development of Minority Women’, which works with non-governmental organisations to impart leadership training to minority women and the ‘Mahila Samridhi Yojana’, which, through the National Minorities Development and Finance Corporation, offers skill development programmes and a stipend of Rs 1,000 per month, along with funding of Rs 1,500 per month for purchasing raw material. After the training, each person is given micro-credit of one lakh rupees for income generation.

Aren’t there poor Hindu students in need of coaching or scholarships? Well, of course there are. Then the question arises, why is the Modi government discriminating against the students of the majority community?