Can Hindutva Re-establish Itself In West Bengal Politics? 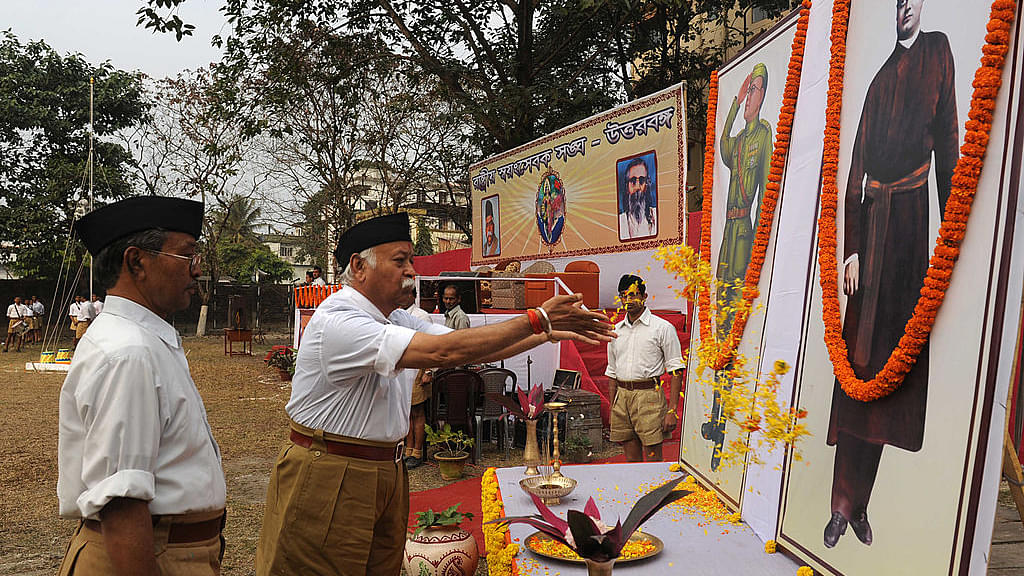 West Bengal has remained, for very long, at the periphery of post-independence Indian politics. This is surprising given the prominence of the undivided province of Bengal in India’s freedom movement. The nineteenth-century Bengal Renaissance was the cauldron in which both the national movement and the Hindu consciousness were born.

The articulation of Hindutva definitely goes back to Veer Savarkar, but the idea was latent in the writings of Bankim Chandra Chattopadhyay (especially Anandamath) and Sri Aurobindo, the devotion of Ramakrishna Paramahamsa, Swami Vivekananda and the actions of Anushilan Samiti and the Jugantar.

Traditionally, Bengali Hindus had not seen a Hindu interest separate from the national movement. But the experience of the Muslim League government and the vicious riots at Noakhali convinced them that their life, liberty and honour of women would be under threat in a majority rule (read League rule).

The Bengali Hindu Homeland Movement came up in 1946, led by Dr Syama Prasad Mukherjee (the leader of Hindu Mahasabha), for a Bengali Hindu homeland within the Indian Union. The demand had full and unanimous support of eminent Bengali Hindu intellectuals like Meghnad Saha, Jadunath Sarkar, Ramesh Chandra Majumdar and Suniti Kumar Chatterji.

The movement saved Bengali Hindus from an uncertain future in United Bengal (influenced by the League) or outright slavery as part of Pakistan. The logic of the partition makes West Bengal the sole inheritor of the heritage of nineteenth-century Bengal. This has complex implications for the Bengali mind.

The question, however, is, what happens next?

The first thing to notice about the Bengali partition was that, unlike in Punjab, there was no near-total exchange of population. East Punjab (Indian part of Punjab) had 33.09 per cent of Muslims in 1941; this figure came down to 1.8 per cent in 1951 and has not increased much (Religious Demography of India, Centre for Policy Studies, Chennai, 2003). West Bengal, on the other hand, had around 25.5 per cent Muslim population in 2011 (Census figures).

Second, the Bengal partition, though relatively less violent, never had the finality of the Punjab partition. The Liaquat-Nehru Pact (also called Delhi Pact) of 1950 abandoned the Bengali Hindus in Bangladesh. Thus, even after 1947, Hindu refugees streamed into West Bengal; the influx was caused by economic deprivation in part, but primarily by the appalling human security prevailing in East Pakistan and later Bangladesh.

The post-independence narrative of West Bengal has ever since been decline and deprivation. The people of the state believe that the Punjab refugees got a better deal than the Bengali ones -- an impression, no doubt, partially bolstered by leftist propaganda.

The communists got an opening in West Bengal politics through their able marshalling of refugee grievances. They were able to divert the refugee movement towards the sentiment of economic and social grievances, and completely ignore the ethnic cleansing in East Bengal.

In addition, American intervention in Korea and Vietnam and other such global issues became the staple slogan of refugee politics. Even on the issues of Hindus in East Bengal, the standard response of the left intellectual was justification -- the Bengali Hindus are leaving East Bengal because of economic reasons, voluntarily. So the liberal facade of the left was successful in hiding the true horrors of the slow genocide in East Bengal.

The communists, by 1977, finally managed to bring under their umbrella a disparate grouping of the small farmers, the upper-caste refugees and the Muslims, which gave them the uninterrupted and total dominance of the state for 34 years. Over this period, West Bengal, with its culture of strikes, disruptions and hostile industrial policies, had been reduced to an industrial backwater. It had led to mass emigration of young middle-class Bengalis from West Bengal, leading to a greying of the population. It created a demographic gap that is now occupied by illegal migrants.

A certain stereotype of the Bengali has emerged in the national psyche -- a person who is sure of their intellectual superiority but, at the same time, lazy and probably misguided. Like all stereotypes, there is some truth to it.

The Bengali bhadralok has formed their identity around intellect, just as some other communities have formed theirs around military prowess or success in business. So it is the tendency of the Bengali bhadralok to gravitate towards ideas that appear sophisticated. There are two good reasons for the Bengali fascination for leftist thought, namely, it is fashionable in academia, and it is successfully presented by the communists as a continuation of the Bengali Renaissance.

Mamata Banerjee, a permanent fixture in Bengal politics, finally broke the leftist stranglehold over state politics in 2011. However, to do so, she needed to engage in identity politics, which had lied dormant in the state for years. In this endeavour, she had to outbid the Left in minority appeasement.

Banerjee allied with the Jamiat Ulema-e-Hind. Her method was to give subsidies to Imams, nominating a hardcore Students Islamic Movement of India, or SIMI, man to Rajya Sabha (Ahmed Hassan Imran), and a general encouragement to burqa, Shariat Courts, Haj Towers and other inducements to Islamist politics.

This state patronage has emboldened the radicals among the community, and there have been several direct attacks on Hindus in the recent past. The attacks were the highest during Muharram, which coincided with Durga Puja this year. The pattern of attack was similar as directed against Hindus in Bangladesh.

Such appeasement has coincided with the sharp rise in Muslim population between 2001 and 2011 (from 19.5 per cent in 1947 to almost 25.5 per cent in 2011). This sudden rise cannot simply be attributed to the Total Fertility Rate of Muslims, which is higher than that of Hindus, but can only go back to large-scale illegal immigration of Muslims.

At this point, it is necessary to look into the wider geopolitical aspect of the matter. Across the border in Bangladesh, Prime Minister Sheikh Hasina is battling many militant Islamist groups that seek to undermine her father’s vision of a secular Bangladesh. She has taken the courageous step of prosecuting leaders of Islamist parties that had collaborated with the Pakistan Army in 1971 and committed atrocities against Bengali people (Hindus and Muslims alike), for war crimes.

On the other hand, various intelligence and National Investigation Agency (NIA) documents have, from time to time, pointed to close financial links between the members of Trinamool Congress and the radical Bangladeshi Islamists. Thus, in a way, the leader of Islamic Bangladesh is fighting Islamists while the leader of secular India is busy appeasing them.

So, then, what is the way out?

West Bengal has no home-grown Hindu “core party” like, say, the Shiv Sena. The politics of Hindutva needs to adapt to local conditions. There is a grave deficit of leadership in the state. For instance, there is no leader of the stature of Syama Prasad among us today.

Even then, the Bharatiya Janata Party (BJP) has grown in West Bengal. In the 2016 assembly elections, it secured three seats and 10.5 per cent of the vote share. The most obvious priority of the party now will be to create an alliance with the marginal people of West Bengal, like the Gorkhas, Santhals, Kamtapuri (indigenous people from Cooch Behar), to protect the unique identity and purpose of West Bengal. A template for such a mobilisation is already provided in the framework of the North Eastern Democratic Alliance.

The BJP has already taken a bold step with the Citizenship Amendment Act 2015, which takes Bengali Hindus out of the ambit of illegal migrants. To make more inroads will take time and an enduring effort. The BJP as a party grows organically. The Rashtriya Swayamsevak Sangh/BJP network in West Bengal is growing (around 1,500 branches by last count). It will be some time before it can supply strong and experienced leadership to the rank of the party.