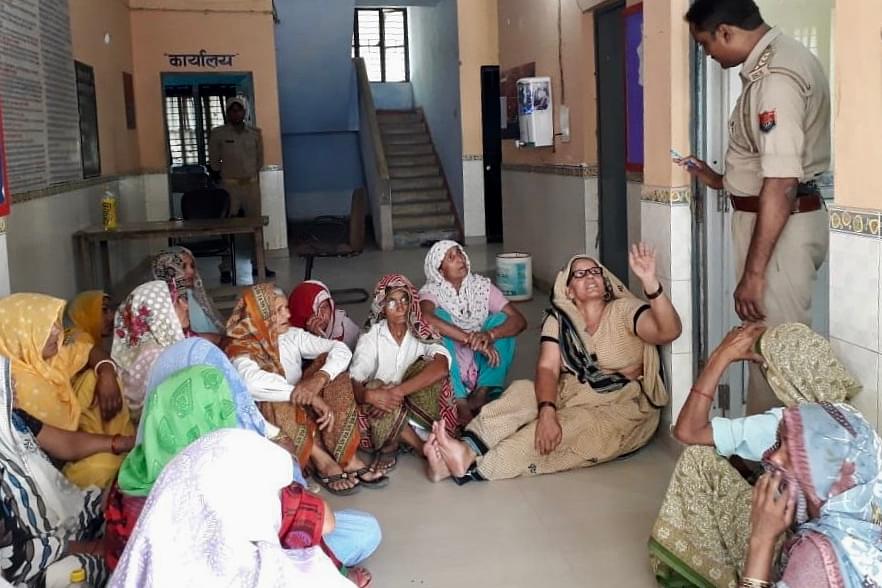 Villagers of Khurshidpura protest inside Jarcha police station on 28 April

Stunned by the recent murder of a farmer by cattle thieves and subsequent ‘police inaction’, residents of village Khurshidpura thronged the Jarcha police station on 28 April, in protest. The all-Jaat village is located in Jarcha area of Uttar Pradesh's Gautam Buddh Nagar district – in which also falls the Greater Noida region.

Singh, 59, was sleeping alone in his cow shed and keeping a vigil on his cattle. A week earlier, thieves had sneaked into the shed and escaped with his only buffalo, causing him a huge set back. Around 3am, he heard a commotion in the adjoining cow shed belonging to his cousin. Thieves had entered again. An unarmed Ratan Singh dashed out and managed to catch hold of one of the thieves.

As per eye-witnesses and the police, two accomplices of the thief fired two shots - the first hit the thief and the other hit Ratan Singh on his chest. Both died on the spot.

When cops from Jarcha police station arrived at the murder site around 5am, angry villagers stopped them from touching the bodies. They insisted that top authorities visit the spot, hear their woes and promise action. Several senior cops, including Gautam Budh Nagar senior superintendent of police (SSP) Vaibhav Krishna, arrived to pacify the villagers.

Spate Of Cattle Thefts Not Taken Seriously By The Police

What had angered the villagers was that the murder was preceded by a spate of cattle thefts and the police, as per them, hadn't taken the matter seriously.

Vijay Singh, a farmer who also happens to be an eye-witness in this case, told Swarajya that after his buffalo was stolen on 3 April, he went to the Jarcha police station but the cops refused to register a first information report (FIR). Ratan Singh's niece told Swarajya that when she called up Jarcha police station on the morning of 20 April that thieves had been spotted in the village and could enter again, the person who picked up the phone called her a liar and disconnected the call.

On 28 April, hundreds of irate villagers staged a protest again, alleging that even after the tragedy, thieves continue to enter the village. They are also incensed that no arrests have been made even after eight days after the murder incident.

"The SSP had asked for a week's time and told us they would catch the thieves. But eight days on, not even one of the accomplices have been arrested," Arun Singh, eldest of the three sons of Ratan Singh, told Swarajya over the phone.

Prabhash Chand, station house officer (SHO) of Jarcha police station, told Swarajya last week that the dead thief had been identified as one Jaiprakash from Ghaziabad's Loni area and the hunt for his accomplices was on.

Kishan Pal, a villager, complained that police aren't keeping vigil in the nights as promised. "In these eight days, the police have patrolled only on two-three days. On all the other nights, thieves have been spotted. There is no fear among the criminals," he said over the phone.

The villagers' anger also stems from their helplessness as the police have told them in no unclear terms that complete protection from thieves is not possible due to "limited manpower".

Dinesh Kumar Singh told Swarajya that when he went to file a complaint about his stolen buffalo on 17 April, the police told him, "Force ki kami hai (we have limited force). Try looking into some of it yourself, and we will try to support you.”

The SHO Prabhash Chand repeated this excuse to Swarajya. He told this correspondent that while he understood the anger of the victim’s family, it is near impossible for the police to patrol all the villages given the "limited manpower".

With death at their doorstep and constant fear of losing their property, how do villagers protect themselves? What are they supposed to do if thieves strike again? Are the villagers on their own now? Are they allowed to tackle the thieves themselves?

These are the questions they took to the police on Sunday.

They returned only after the police gave them verbal assurances, along from promising arrest of the killers within a week.

Rajkumar Singh, the president of a BJP-affiliated farmers' group in Jarcha, told Swarajya over the phone about the proposals that the circle officer (CO) of Dadri offered the protesters.

Rajkumar said the villagers had questions and doubts on both the proposals but the police haven't yet clarified on them.

This correspondent talked to Awaneesh Kumar, CO Dadri, who said that's not what he meant and the villagers seem to have misunderstood him.

Kumar said, "We aren't giving any weapons to villagers to fight cattle thieves. Instead, the inspector at Jarcha thana asked me if villagers could take back the arms that some of them had deposited with the district administration ahead of elections. I said yes as it's their own property."

On 'police mitra' cards, Awaneesh Kumar said he mentioned those as part of a proposal that "villagers could cooperate with the police like they do through village-level peace committees".

He explained, "I mentioned that after some villagers said they wanted to help the police. We have not finalised anything but yes, some youths could work as volunteers after due police verification," Kumar said.

"We can look at reviving the 'police mitra' system where some volunteers are given some sort of identity cards. I think such a system was in place until last year in Noida. I'll have to check,” he said.

It's evident that the said proposal was made to pacify the villagers who simply misunderstood it and returned home, temporarily pacified. By their own admission, they do not quite know how a verbal promise of ‘cooperation’ may play out in reality.

Let's look at a recent case where villagers similarly 'worked closely with the police' against cattle thieves but ended up behind bars and are now facing trial over murder charges - the famous Rakbar Khan case in Rajasthan's Alwar district.

Rakbar Khan, 29, and his aide Aslam were found by villagers taking cows through fields on 21 July, between 12 and 1 am, in Lalawandi village of Ramgarh tehsil. The route on which they were confronted by villagers is a regular for smugglers. The owner of the field, Kailash Yadav, told the media that he often woke up to find footprints of men and cattle in his field and his crops damaged. It was after repeated incidents that the residents decided to lay a trap and nab the culprits. Aslam managed to escape but villagers caught Rakbar, and called up Naval Sharma. Naval is Alwar's best-known gau rakshak who lives in Ramgarh and who, till that case, was a regular informer to the police against cattle thieves. Naval arrived with the police and the villagers handed over Rakbar to the police. There are phorographs that show Rakbar alive and sitting upright in the police vehicle.

A controversy erupted after Rakbar died on the same night in the police station under circumstances yet unknown. As per his post-mortem, it was due to shock caused by his injuries as a result of thrashing. Under fire, the police slapped murder charges against Lalawandi residents Paramjit, Naresh and Dharmendra. Dharmendra is son of Kailash in whose field Rakbar was found.

The chargesheet, filed in October, says Rakbar died after being beaten up by the three men. They have been charged under sections 302, 341, 323 and 34 of the Indian Penal Code. Even Naval Sharma is facing a police probe. It's pertinent to mention here that Rakbar had been previously chargesheeted for cow trafficking in 2014. The FIR in the case was filed on 24 December 2014 at Alwar's Naugawa police station.

Rajkumar said he did not know these details of the Rakbar Khan case but they “are worrying”.

This correspondent also asked Awaneesh Kumar what if the Rakbar Khan case sees a repeat in Jarcha. Kumar said he was not aware of the finer details of the case and hence could not comment on it , but if villagers hand over a thief to the police, the police must immediately take the thief for medical examination so that such a situation would not arise.

Alwar Voices Strongly Against Cooperating With The Police

Meanwhile, voices from the Alwar advice strongly against any such ‘cooperation’.

Phool Singh, a close aid of Naval Sharma, told this correspondent over the phone, “Tell the villagers they should not trust the police at any cost.”

A bitter Singh said, "Don’t they know that in India, life of a cattle thief is more precious than that of a gaurakshak or farmer? Tell them not to work with the police under any circumstances. They only care about their job.”

Clearly, the solution around mutual ‘cooperation’ in Jarcha must rest on more than a verbal assurance from the police.