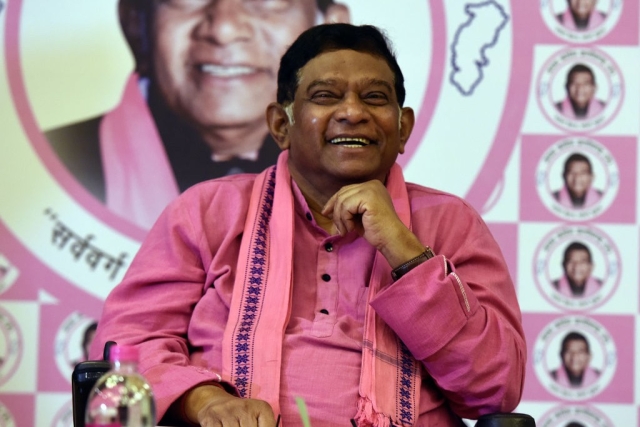 Bahujan Samaj Party (BSP) supremo Mayawati and Janta Congress Chhattisgarh chief Ajit Jogi have sealed a deal for the upcoming assembly elections in Chhattisgarh. According to the agreement, Jogi’s party will contest on 55 seats and Mayawati’s 35. The alliance has been frozen after months of speculation and talks between BSP-Congress failed. Mayawati had a week earlier threatened to go it alone if she wasn’t granted a fair share of seats.

The state has 29 seats reserved for Scheduled Tribes (ST) and 10 for Scheduled Castes (SC). Tribals constitute 32 per cent of the state population and Dalits form 12 per cent. The alliance hopes to consolidate this sizeable SC-ST vote bank of 44 per cent and dent the prospects of both Congress and Bharatiya Janata Party (BJP). The alliance is projecting Jogi as its chief ministerial candidate. While both leaders, Jogi and Mayawati, know that they can’t win the elections, the thrust of the alliance is on creating a hung assembly and emerge as a kingmaker.

The agitation by the upper caste in the three states that go to polls by the year-end, protesting the amendment to SC-ST Act nullifying the Supreme Court order, has taken political parties by surprise. Congress strategists developed cold feet and showed reluctance to join hands with Mayawati. Any formal alliance with BSP would have alienated upper caste voters from the Congress and the party would not have been able to take advantage of the upper caste anger against the BJP. This, despite there was strong rationale for the alliance. BSP’s vote share in all three elections was higher than BJP’s margin of victory. If Congress and BSP would have contested together in 2013, they would have won the elections bagging 52 out of 90 seats.

On the face of it, this is good news for BJP. Anti-BJP votes will split between Congress and Jogi-Mayawati alliance helping the incumbent. An alliance between BSP and Congress would have posed a tougher challenge. A truly triangular contest in the state occurred in 2003 when Vidya Charan Shukla left Congress and joined Sharad Pawar’s Nationalist Congress Party (NCP). Pawar’s party went on to bag 7 per cent vote share, more than twice the difference between BJP and Congress vote shares, denting the grand old party’s chances. BJP hopes for a repeat of 2003.

Jogi-Mayawati Aim To Spoil Chances Of Both BJP And Congress

BJP currently has nine MLAs in the 10 SC-reserved seats. The alliance is likely to damage BJP prospects here. Congress currently has 18 MLAs in the ST-reserved seats. The alliance is likely to hurt Congress prospects here. While BJP’s share of seats has been on an upswing in the SC-reserved constituencies, it has witnessed an opposite trend in the ST-reserved constituencies.

The alliance hopes to consolidate the vote of others. Others (small parties and independents) have historically had a little over 20 per cent vote share in SC-ST seats. The alliance will also target to get a portion of the ‘NOTA’ voters on its side playing the tribal asmita card. The state, dominated by tribals, has never seen a tribal chief minister after Jogi.

Jogi Hopes To Repeat A Karnataka

Jogi hopes to win five-10 seats and create a hung assembly situation, and emerge as a kingmaker. Like in Karnataka, he thinks he will be able to force Congress to back him then to install a non-BJP government in the state. Jogi enjoys good popularity among the voters in Chhattisgarh. In some surveys (IBC, ABP), he is the second-most favoured candidate to be the chief minister in the state after Raman Singh. He has good clout among the STs, as he hails from the Satnami Dalit Samaj, which has considerable influence on 20 seats in the state.

In any alliance, transferability of votes is a key issue. The seamless transfer of votes between BSP and Jogi Congress will determine the success of this alliance. Further, BSP has lost support since the last elections. It failed to open its account in Lok Sabha polls and fared poorly in Uttar Pradesh elections. Jogi’s controversial image and allegations of corruption could also harm the prospects of this alliance.

In the end it all boils down to the seat-wise impact which the alliance could have. This will get clear once the candidates of all parties are announced. A nail-biting finish is on the anvil in the state.