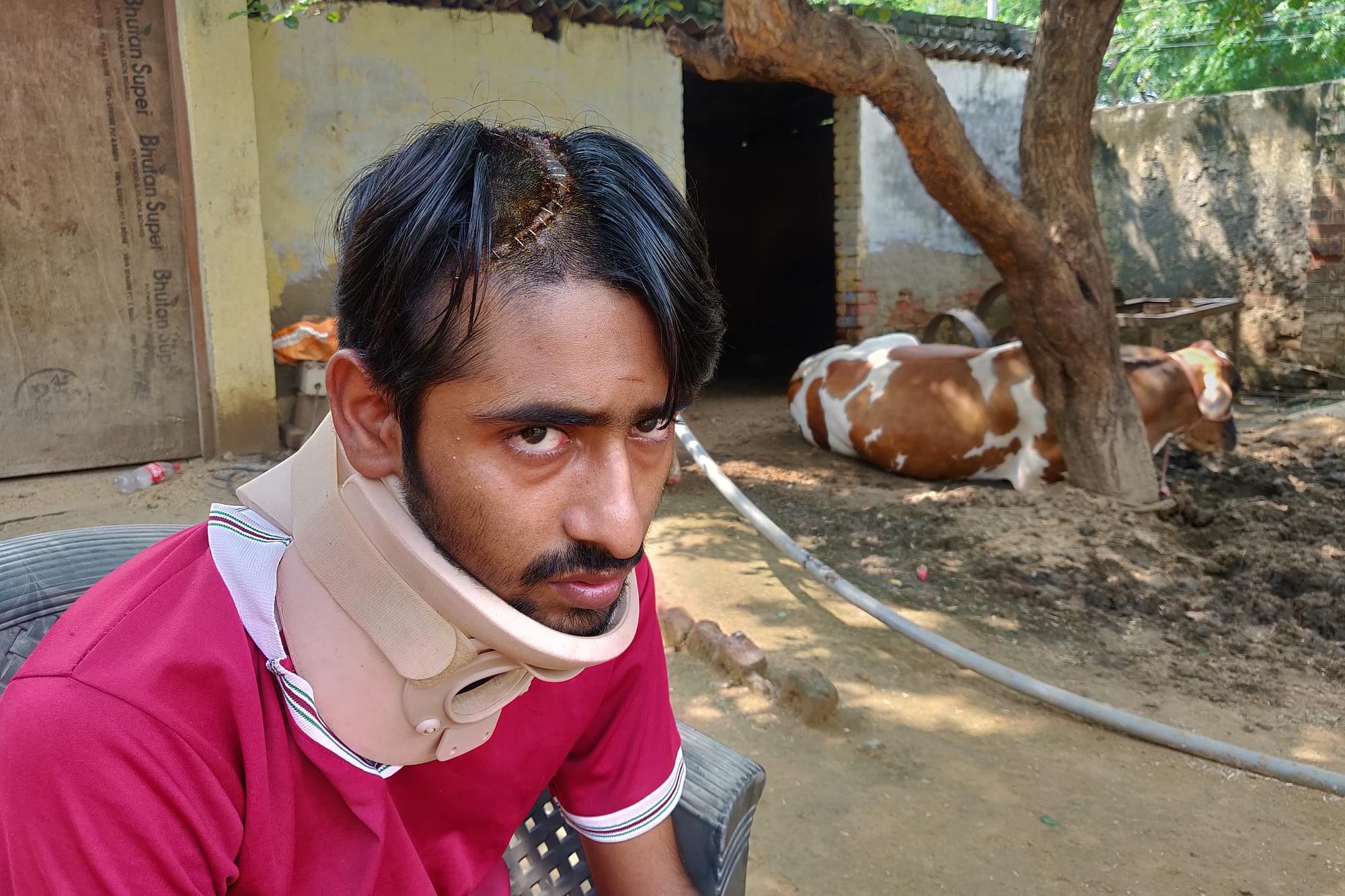 Tinku Dayma at his home on 9 September

A row of stitches run through the middle of his scalp. He wears a neck brace and spends most of his days lying in bed. The stitches hurt.

However what hurts him more is that pictures of his stitched head were massively misused for political propaganda.

The pictures were shared by political leaders and social media influencers as a farm bill protester injured in “lathi-charge” by police in Haryana’s Karnal district on 28 August.

“I was deeply hurt when I saw the posts. I received them on my gau raksha Whatsapp group. How could they misuse my injuries for political gains?” he told this correspondent on Thursday (9 September) at his home in Kadarpur village that falls under Sohna tehsil of Haryana’s Gurugram district.

The same day (29 August), Tinku emailed a complaint to the cyber cell of Gurugram police, asking for action against those who spread his pictures with a false claim.

“I received a reply from them that they are looking into the matters,” he says.

By the time Tinku learnt about the posts, several journalists had clarified that the injured person was a “gau rakshak” and not a farm bill protester. However Tinku is disappointed that few journalists have met him to hear what unfolded on the intervening night of 24 and 25 August.

Tinku volunteers for free for a local “gau raksha dal” that is headed by a “Bajrang Dal leader”. He explains the modus operandi: The group coordinates its activities through a Whatsapp group.

The members – who call themselves gau rakshaks - share real-time information about cows being picked up from a particular street or village and forced into a mini-truck by suspected cow thieves. The volunteers who are closest to the spot where the truck is headed, immediately inform the police, but also reach the spot themselves. They chase the thieves’ vehicle and try to intercept it.

If they succeed in stopping the vehicle and catching hold of the thieves, they hand them over to the police who are usually chasing the same vehicle in their own police jeep. Cows are taken to a cow shelter, run by a trust or the government.

“Our goal is to save cows from slaughter. Even getting the thieves arrested is secondary,” says Tinku. His mother Geeta adds, “It is because all thieves easily get bail and resume the same criminal activities once out.”

Around 3 am on the intervening night of 24 and 25 August, Tinku received a message on the group that a mini-struck carrying cows picked up from Wazirabad is headed towards Ullawas Dhani road, which is around five kilometres from his home. “I, along with several other boys, immediately reached there. We were in a camper van. The police were also chasing them at the same time. We spotted the thieves’ vehicle easily,” he says.

Asked how he was sure if was the thieves’ vehicle, Tinku says “it’s easy to spot them”. “One, cows are visible from a distance. Only thieves ferry cows in dead of the night. And the cows are piled up on each other. No dairy farmer would transport his animals like this. Two, such vehicles are always without number plates.”

Tinku further narrates the story. “When we were just metres behind the mini-truck, the thieves started throwing glass bottles at us. It is something that they routinely do. They keep a stock of broken glass bottles inside. We saved ourselves from the attack, but this time the thieves threw a cow in our direction. We lost balance and fell,” he says. “I don’t really know what happened to me after the camper turned turtle. All I remember is that I managed to save the cow from being crushed,” he says.

His mother Geeta says that fellow ‘gau rakshaks’ took Tinku to a hospital the same night. “It is because of the blessings of gau mata that my son is alive,” she says.

Tinku has studied till Class 12. He has an elder brother and three sisters. The family depends on farming and an in-house dairy for livelihood. Geeta says they are not rich, but are “content”.

Theirs is a Gujjar family in an all-Gujjar village. It’s a big village, with about 7,000 votes. In neighbouring houses, men are away at work and women are tending to their milch animals. A woman says Tinku is “doing very good work and blessings of gau mata are with him”.

Unlike in urban elite circles, gau raksha is a respectable word in the village. Many youths are members of the gau raksha dal. If the word has attained notoriety in recent times, villagers aren’t bothered.

“How is gau raksha bad? Gau raksha is our biggest dharma,” says Geeta.

Tinku’s grandmother nods. “It is must for every Hindu to protect cows,” she says.

When mentioned that gau rakshaks are called lynchers and goons, even if for crimes committed by some, Tinku says “it happens only in your cities”.

“Nobody calls us gunda here.”

Geeta says that when villagers learnt about the confrontation with thieves that night, many elderly residents – particularly women – visited Tinku in the hospital. “They touched his feet and showered blessings on him for doing the punya of saving cows,” she says.

Asked why youths like him take law into their own hands when it is the job of the police, Tinku says gau rakshaks work with the police. We never step out without informing the police. Many a times, the police seek our help. Gau rakshaks and the police work together,” he says.

His mother interrupts. “If the police did their job well, why would our boys have to go out at night?”

Asked why she allows her son to risk his life everyday for a work that doesn’t pay and would be called vigilantism, Geeta says though she fears for Tinku’s life, gau sewa is important too. “Honestly, I can’t bear that cows are slaughtered. We never heard things like this while growing up. It’s only now that Meos are indulging in cow slaughter and doing so at such a massive scale,” she says.

Meos are a tribe in Haryana and Rajasthan who live in what’s called the Mewat belt. Meos claim they are descendants of Rajputs, but some British historical accounts say they were originally from Meena tribe. Meos have undergone several waves of Islamic conversion and today are almost entirely Muslims. Islamic ‘revivalist’ movement Tablighi Jamaat has its roots in Mewat and holds sway over most Meos.

Notorious for crimes, the Mewat belt is considered amongst the most backward area in the country.

From Tinku’s village, Mewat is only 30 kilometres away.

“All these thieves are Meos. Everyone knows that,” he says.

It may be recalled here that in 2019, the Punjab and Haryana high court came down heavily on Haryana government and police for failing to curb cow smuggling and slaughter in Mewat. The court held a series of hearings, asking the police chief to give detailed reasons why none of the accused in 800 cases filed under the state’s anti-cow slaughter laws since 2015 had been convicted.

The court also pulled up the police for failing to arrest cow smugglers when caught red-handed “despite a secret information to the police prior in time”.

In a written reply, Haryana Director General of Police Manoj Yadava told the court that the police personnel in Mewat were working in a quite hostile atmosphere, facing danger to their life as well as safety.

The court appointed an Amicus Curiae for assistance in strengthening anti-cow slaughter laws. The Amicus Curiae, Deepak Balyan, in his report said that Mewat “is a paradise for beef traders” with a “powerful meat lobby”, and these crimes happen in connivance with local cops.

Balyan suggested a need for a new task force in Mewat to tackle this crime, but headed by a cop with a “secular mindset”.

Both Rakbar Khan and Ummer Khan, who died in confrontations with gau rakshaks when caught smuggling cows, were Meos. Their deaths were reported by sections of mainstream media as cases of “mob lynchings” of Muslims by Hindus. Opposition parties used the media reportage to run a campaign against the BJP for allegedly emboldening Sangh-affiliated Hindutva activists who were targetting innocent Muslims in the name of gau raksha.

Rakbar was a chargesheeted cow thief out on bail. Ummer had several cases of cow smuggling registered against him. Both were described by mainstream media as “dairy farmers transporting cows”.

A year after his death, his son Maqsood was arrested by the police for indulging in the same crime his father was involved in. The Haryana government paid the families of both Rakbar and Ummer lakhs in compensation.

The media coverage for Rakbar and Ummer’s deaths was largely one-sided and failed to the present the problem in it entirety – that of rampant cow smuggling and slaughter in Mewat and indiscriminate killings of dairy farmers by smugglers for resisting theft of their milch animals.

Tinku says the youths must resist cow slaughter or “the day is not far when these thieves would enter our houses brazenly and take away our cows for slaughter”.

His mother, though visibly worried, doesn’t protest this.