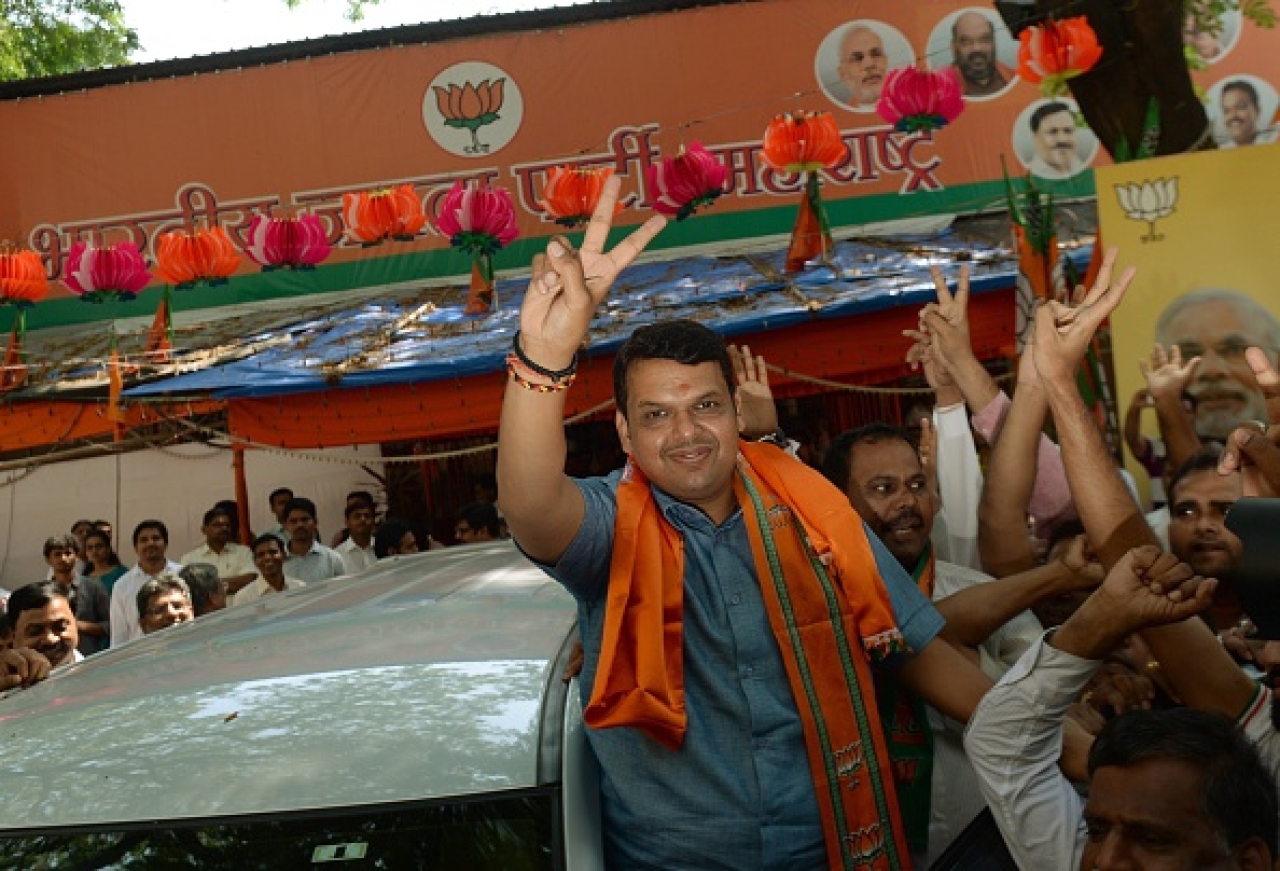 The man of the hour, Devendra Fadnavis

Ten municipal corporations of Maharashtra went to polls on 23 February in what was billed as the ‘mark to market’ test for the leading parties, Bharatiya Janata Party (BJP), Shiv Sena, Congress and the Nationalist Congress Party (NCP). While Congress and NCP had tactical seat-sharing in a few places, the BJP and Sena contested the elections against each other, despite the Sena supporting the BJP government in the state and Delhi. One of the most high-pitch local election battles, this round was billed as the personal battle for Chief Minister (CM) Devendra Fadnavis, who criss-crossed the state for rallies and was the face of the BJP campaign.

Fadnavis today emerged as the unequivocal man of the match of the election counting day, as the BJP swept Nashik, Pune, Akola, Amravati, Nagpur, Pimpri-Chinchwad (PCMC) and Solapur corporations, while being tantalisingly close to a simple majority in Ulhasnagar. The BJP will now control eight of the ten corporations which went to polls this cycle. The Sena won Thane comfortably.

The big election at the Brihanmumbai Municipal Corporation (BMC) is hanging in delicate balance - BJP stopped the Sena in its tracks on its home turf where the Sena was expecting to win a majority on its own. The fate of BMC will evolve over the next few weeks as the BJP- Sena alliance dynamics play out.

Here are the broad implications from today’s verdict.

First, today’s results bring significant stability to Maharashtra politics, with CM Fadnavis firmly establishing himself as unquestionably, the tallest towering figure in the state politics. The challenges he has faced, and very ably repulsed, from internal and external forces over the last two and half years of his term will significantly go down. Like the Modi wave of 2014 Lok Sabha, Fadnavis owned this municipal election and delivered a knockout punch to his critics, creating a firm footing for the BJP in Maharashtra.

Second, Maharashtra is now a uniquely saffron state in that BJP and the Sena have emerged as the two poles of the state politics. Both are right of centre parties in the Indian political lexicon, and between them, they control the local administration in every significant city and municipal corporation in the state. Such levels of political saffronisation are unmatched anywhere in the country, except may be in Madhya Pradesh and Gujarat, where BJP has held on to its own against Congress for many years.

Third, Fadnavis emerges as a strong voice within BJP, and perhaps first among equals among his peers. Maharashtra has 48 Lok Sabha seats, more than any state in which the BJP has a strong position. This number will be critical for the 2019 Lok Sabha election and Fadnavis will be the lynchpin of the party campaign in 2019 just like other star CMs Shivraj Singh Chouhan, Raman Singh, and Vasundhara Raje Scindia.

Fourth, Congress has been made redundant in Maharashtra politics. The party was an insignificant second in Akola, Nagpur, and Amravati, third in Nashik, Mumbai, Pune, and Solapur, and was virtually wiped out in Pimpri-Chinchwad, Thane, and Ulhasnagar. Its Mumbai unit chief Sanjay Nirupam has resigned owning moral responsibility for the defeat. The party also suffered losses in the 25 Zila Parishad elections which were also held on 21 February. Congress has politically vanished from the Mumbai-Thane-Nashik-Pune belt, home to almost 4 per cent of India’s most urbanised population - an area, large parts of which it controlled along with its allies just three years ago.

Fifth, the favourite theory of national media that BJP does not do well against regional parties while trouncing Congress has been put to rest today. BJP undid Shiv Sena in Mumbai and defeated NCP in its traditional stronghold of PCMC. Another related theory of BJP not being able to deal with grand alliances or mahagathbandhans was also laid to rest in Pune. Congress and NCP were fighting together in 100 of the 162 wards, and yet BJP made the half way mark in the city.

Sixth, the Sena needs to accept that it is no longer the big brother in the full-time antagonistic, part-time remunerative National Democratic Alliance (NDA) of Maharashtra. The BJP has spread its wings through the state and in most cities, making big gains in traditionally weak rural areas as well. The Sena has been reduced to a force in the Konkan region, where its influence is diminishing sharply. The prestigious BMC election is not over today. The Sena expected to get close to the half-way mark of 114 on its own. They ended up at 84. The BJP got to 82 and has claimed support from at least four other corporators, indicating that it should install its mayor in the city ahead of the Sena candidate. This battle will continue for some more time.

The Sena can theoretically ally with Congress to keep BJP away in BMC, but that would be politically suicidal. It can fight with the MNS corporators on its side and stake claim to the mayoral post as the single largest block. Any which way, the negotiating power the Sena has in the state and the central governments will now diminish significantly. The dependency is increasingly one way, and this is not great news for the party.

Seventh, the NCP has actually held on to some consolation prizes. In Pune and PCMC, NCP for a while did give a fight to the BJP. In Thane, it finishes second, ahead of the BJP. Even in Mumbai, NCP will finish ahead of Maharashtra Navnirman Sena (MNS), Samajwadi Party and All India Majlis-e-Ittehadul Muslimeen (AIMIM). While the party retains some position of strength through the local strongmen who are aligned with the party, it has completely lost its ability to transcend the core support base and the caste fault lines.

Eighth, the MNS has been a big loser as compared to the 2012 election. In 2012, MNS emerged as a very strong force in Mumbai and Pune, and won the corporation in Nashik. This time, while MNS did lead ten seats in Mumbai at the peak, and may have influenced several Sena-BJP battles in the Maharashtrian areas of the city, it won only seven wards in Mumbai and six in Pune. The biggest disappointment was Nashik, where the anti-incumbency was so strong, the party will likely end under five seats out of 122.

Ninth, the voting pattern in this election was around a solid voter base and identity (largely the Sena vote) or around the BJP’s positioning as a pro-development party. The caste-divide which engulfed the state over the last year through various morchas and non-political gatherings has failed to impact the election in any way. Politicians trying to amplify social schisms will hopefully pay heed to the message from today’s results.

Tenth, there was little or no role of national issues in these elections. When the Sena took a big, early lead in the day in Mumbai, national media personalities went bonkers on social media explaining the phenomenon variously as a vote against demonetisation, the BJP’s inability to win against regional parties, and an emergence of the Sena as the new secular kid on the block. It was a perfect example of inability to generate the right hypothesis and collecting wrong data to support these untenable hypotheses rolled into one. In reality, the issues discussed were local and people who influenced the outcome were Maharashtrians.

Uddhav Thackeray may want to claim that the Sena continues to be the answer to the apocryphal Bollywood-originated question, “Mumbai ka raja kaun?” But tonight, even he will agree that pending another referendum on that question, Fadnavis is today the undisputed icon of Maharashtra politics.