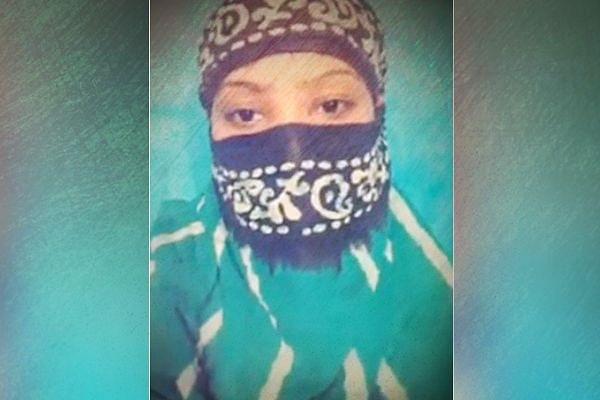 Often, youths on one side gang up to promote each other and target the other camp. They warn each other against offending their religious sentiments, or else. They take names and throw challenges.

It’s a world of its own.

Sometimes, the videos spread to Twitter. That’s when shit gets real. It’s no more between camps or the virtual world now. The state intervenes. Police show up at the door with handcuffs.

This week, a particularly offensive video by a woman named Heer Khan, from Uttar Pradesh’s Allahabad district, made its way to Twitter.

Khan’s video was a long, offensive rant against Sita, a revered deity of Hindus and wife of Ram, the prince of Ayodhya. The ancient Indian epic Ramayana records the story of Rama’s exile, his quest to rescue his wife from the clutches of demon Ravana, and his eventual return to Ayodhya where he establishes ‘Ram Rajya’ or the perfect land.

In the beginning of the video, Khan, with her face covered with a dupatta, says her video is an answer to some Hindu YouTube users along with “kaafirs” in general.

She begins to use choicest sexual slurs for Sita, which are too explicit to be mentioned here. In between the rant, she calls Ayodhya a brothel, Ram, son of a prostitute and Ravana, Sita’s lover.

The video sparked a major outrage on social media, and a hashtag demanding Khan’s arrest trended for an entire day. By the evening of 25 August, an FIR (first information report) had been filed against her, and she was arrested. Among the charges involved against her were IPC sections 153-A (promoting enmity between different groups) and 505 (intent to incite).

The outrage over the video was primarily about insult to Hindu deities.

Social media users compared the brazen act of Khan with a cartoon recently posted on Facebook by a Hindu man in Bengaluru that was deemed insulting to Mohammed, the prophet of Islam, and sparked off a night of violence and rampage by Muslims mobs.

Users pointed out that despite a lengthy video filled with horrendous comments against Hindu deities, no Hindu mobs went on a rampage damaging public or private property. Instead, they maintained their faith in the law and order for justice and demanded that the police should throw Heer Khan into jail.

I too was left disturbed by the video, but for additional reasons.

One, I saw with horror a woman wishing the worst of sexual atrocities on another woman.

Two, her target, by her own admission, were ‘kaafirs’. This means she wished the sexual atrocities on other women for their religion.

Three, she called for the “mullahs” to carry out those atrocities.

(In the video, Khan says she wishes Sita is raped by the mullahs and a rod inserted in her private parts).

Khan’s video is disturbing, yet reveals the resilience of the ideas that historically fuelled religious targeting of Hindu women and continue to do so, to this day.

It is disturbing that while sex crimes affect all women and all women should stand against them in solidarity, a woman herself, under certain ideological influence, can call on men to commit the most heinous crimes against another woman just because the latter is a “kaafir”.

It is telling that Khan calls on “mullahs”, that is Muslim men learned in Islamic theology and sacred law, to commit these crimes, revealing the underlying belief of religious mandate and hence, religious gratification to be obtained from such acts.

It is possible that Muslim women who share the extreme Islamist ideology with the Muslim men, facilitate the crimes against kaafir women as a proof of their commitment to the cause.

Ground reality shows that radical Muslim women are often indeed active and willing participants in rapes and killings of kaafir women carried out by Muslim men. The reverse, that is Hindu women assisting Hindu men in atrocities on Muslim women, is unheard of.

Let me cite some examples:

These are just some of the examples.

Be it the medieval Muslim rule or organised Islamist groups operating today, the demographic goals that come with the dreams of a global caliphate — Darul Islam or Ghazwa-i-Hind — have translated into a tragedy of extreme proportions for kaafir women and children.

The body of a Hindu woman has long been the instrument of expressing the ‘might of Islam’ and subjugation of Hindus.

In his seminal book, Pakistan or the Partition of India, B R Ambedkar recorded some figures related to abduction of women during communal hostilities. He wrote that as per the government in 1932, a total of 568 women were reported to be abducted between 1922 and 1927 in the Province of Bengal. Of these, 395 (or about 70 per cent) were Hindus and 151 (or 26 per cent) were Muslims.

It is a shame that not only in Pakistan and Bangladesh are the Hindu women openly and routinely targeted with violence, but they aren’t safe even in the only so-called Hindu majority country in the subcontinent. In India, extremist groups have been given a free hand in targeting Hindu women, from Kashmir to Kerala.

Also read: A look into deep historical roots of Love Jihad and ideological motivations behind it

So, the real question is — how many more Hindu women need to be abducted, abused, raped, forcibly converted, or killed, before we start fighting the ideas and ideologies behind such acts? How many victims before women rights activist, intellectuals, politicians and celebrities speak up?