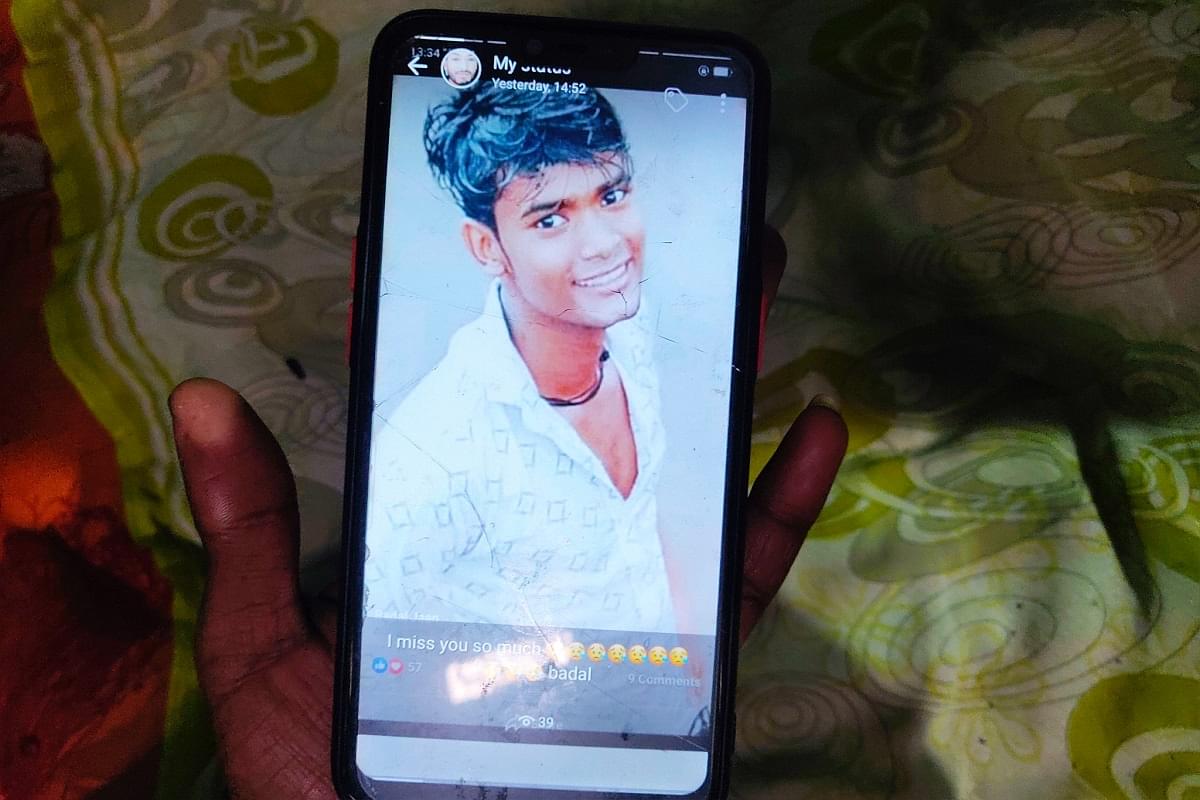 A picture of the victim, Dablu Singh alias Badal.

In his seminal 1945 book Pakistan, or The Partition of India, Dr B R Ambedkar wrote, “…The Hindus are right when they say that it is not possible to establish social contact between Hindus and Muslims because such contact can only mean contact between women from one side and men from the other”.

Seventy-five years later, in what is left of India after a bloodied partition, murders of Hindu men for daring to enter into relationships with Muslim women are shockingly routine.

On 30 November, a 21-year-old man named Dablu Singh was hacked to death by the maternal uncle and brother of his Muslim girlfriend in the national capital.

On 2 December when this correspondent visited Dablu’s house, his wailing mother said the killers had warned her son that he should either accept Islam or stay away from their daughter.

Dablu was killed for his refusal to accept Islam, she said.

Shobhawati narrated the events of some months ago when the family of Laadli learnt about their relationship.

Laadli’s brother Laadla alias Farhan and her maternal uncle Shah Alam have been identified as the killers and are behind bars. They were arrested on 1 December.

Shobhawati says Shah Alam visited her house four months ago and angrily asked her to “control” her son.

“I apologised for my son’s behaviour with folded hands. I assured Shah Alam that my son would never see Laadli again,” says Shobhawati.

After a few days, Shah Alam confronted the family again. He complained that Laadli had visited a police station and given a written application that she wanted to marry Dablu on her free will.

“Shah Alam then made an offer to us. He said that if Dablu converted to Islam, he would accept the relationship and get the two married,” says Shobhawati.

“My son told him that he is born a Hindu, a Chauhan, and he would never change his religion,” says Shobhawati.

Nema says Shah Alam threatened the family with dire consequences if Dablu continued to go after his niece. “He said he would kill us all,” says Nema.

A man, Dablu Singh, was killed by brother and maternal uncle of his girlfriend on Tuesday. Dablu's mother Shobhawati tells me the killers - Farhan and Shah Alam - had asked her son to convert to Islam. Dablu had refused. Alam had also offered Rs 2 lakh in lieu of conversion. pic.twitter.com/BmO4uQHelK

Shobhawati says the matter settled down over the next few days when Shah Alam sent Laadli to his native village in Bengal.

She says she does not know what transpired over the last few days for Shah Alam to execute his threat.

“I do not know. I really do not know. All I know is that my son told me on Tuesday that some people had called him outside and he would be back in no time. When my son returned, he had been stabbed multiple times in his neck,” she says.

Shobhawati and her husband migrated from Jaunpur district in Uttar Pradesh to New Delhi two decades ago. “Dablu was about a year old then,” she says.

The couple made Raghubir Nagar in northwest Delhi their home. Her husband began selling vegetables on a cart — a means of earning he pursues till date. The couple has two children — the elder son is named Bablu; the younger son was Dablu, who was known in the family by his nickname Badal.

The family lives in a small two-room set that has no kitchen. They pay Rs 7,000 as rent.

Dablu worked at a meat shop that is located near the 'Bengali basti'. It was there that he came in contact with Laadli.

Dablu would get his weekly off on Tuesdays and thus was at home all day. Late evening, Laadla called up Dablu and asked him to meet him in the market.

Nema says that in Rajouri Police Station (where a case for murder was filed against Shah Alam and Laadla on 30 November), Shah Alam told the police to let Laadla off as “he was solely responsible for the murder”.

“He [Shah Alam] told the police — ‘I have done it. Leave my nephew’. He looked like he had no regrets at all,” says Nema.

“All we want now is that both of them should be hanged. That family should lose their son like we have lost ours,” says Nema.

Outside the house, three security personnel are sitting guard. No mediaperson or activist is in sight.

A security personnel tells me that about an hour ago, a group of Hindu activists sporting saffron stoles have gathered and raised slogans. They check the time; it is 1 pm.

I spot a congregation near the house. It turns out that a temple is hosting a bhandara. The hosts and the attendees know that a murder has happened, but are not aware of the details.

Shobhawati had told me that Laadli’s family lives “two streets away”. I follow the directions given by her, ask around for help, but in vain.

A Spate Of Such Murders In The Area

It is in the same Raghubir Nagar area area that Ankit Saxena had his throat slit on a busy street by the parents of his girlfriend, Shehzadi, in 2018.

This correspondent reported at that time that Shehzadi’s mother would often talk of ‘dojakh ki aag’ and believed that anyone who died as a non-Muslim, burnt in eternal hellfire forever.

Less than 10 kilometres from Dablu’s house, 20-year-old Rahul Rajput, a resident of Adarsh Nagar in northwest Delhi, was killed by brothers and cousins of his Muslim girlfriend Shehgufa last year.

The killers came from Jahangirpuri, an almost all-Muslim settlement of largely Bengali migrants.

A year earlier, a 46-year-old businessman, Dhruv Tyagi, was killed by a Muslim migrant family when he halted his scooter to confront them for passing lewd remarks at his daughter.