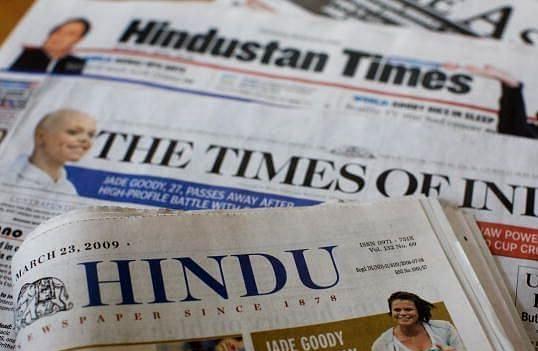 In the first week of March, the Delhi police released two videos that showed a mob attacking security forces in the Chand Bagh area of northeast Delhi, which was hit by communal riots in February.

The videos, said to be of 24 February afternoon, captured the violence in which head constable Ratan Lal was killed and Shahdara DCP Amit Sharma sustained serious injuries.

In one of the videos, which was 77-seconds long, DCP Sharma was seen being escorted by other cops amid heavy stone-pelting by the mob.

Other than The Times of India, major newspapers downplayed the crucial videos. The TOI was, perhaps, the only publication to report that the mob comprised of “anti-CAA protesters”.

“The videos show a mob of over 2,000 anti-CAA protesters attacking badly outnumbered policemen, throwing stones at them and even firing, as they are huddled over the divider, trying to escape the fury of the mob. This is the incident in which head constable Ratan Lal was shot dead while DCP Amit Sharma was critically injured, along with ACP Anuj Kumar and a dozen other cops. These clips show several women to be part of the mob,” the TOI report, published on the first page, said.

Hindustan Times, on the other hand, pushed the important news to the fifth page. It also failed to mention that the attackers were anti-CAA protesters. It just called them “groups of rioters”.

While TOI identified the rioters as anti-CAA protesters, Hindustan Times just wrote âriotersâ in its headline and report on the video released by police yesterday.
Placed on page 5. Played it down, in my opinion. pic.twitter.com/82TldSYwhh

The Indian Express and The Hindu called the attackers simply as “mob”, and failed to mention that they opened fire at the police.

The Indian Express, in its report, described the violence as “clashes over the Citizenship (Amendment) Act”.

The Hindu, in its report, said, “A video of the February 24 violence had gone viral on the social media on Thursday in which Shahdara DCP Amit Sharma and other policemen were seen being thrashed by a mob that includes women on Wazirabad Road near Chand Bagh. It was the same place where head constable Ratan Lal was killed. In a two-minute video, a team of policemen, including Mr Sharma, was seen attacked by a mob from left and right. The police team could not move back because of a five-feet high central verge and they got trapped in heavy stone-pelting.”

After releasing the videos, the police shared more details with the media and called the attack as a “conspiracy” by the mob against the cops.

A 12 March report by the Press Trust of India quoted a “senior Delhi police official” saying that, “It emerged during investigation that the spot where the incident took place was the venue for an anti-CAA protest. In the fateful day, a conspiracy was hatched to attack police," a senior Delhi Police official said.

Statements by DCP Sharma’s wife Pooja gives an insight into this “conspiracy”. She told TOI, “My husband had gone to have a dialogue with the protesters. It was a group of only women. They took off his helmet and then the mob attacked him.”

She further told the media that the mob had “pre-planned” the attack. News18 quoted her as saying that anti-CAA women protesters called Sharma at the protest site for a talk, but when he obliged and went for the meeting, the women surrounded him, followed by men. Suddenly, one of the women rioters pulled away his helmet and he was attacked with hockey sticks and iron rods. His wife adds that the rioters were also carrying knives and pistols.

Such a brutal assault on the security forces at an anti-CAA protest, that too under what seems like a conspiracy, should have triggered huge criticism of the anti-CAA protests being staged in various corners of Delhi. Far from it, a major section of the mainstream media almost brushed it under the carpet, giving it only token coverage and not revealing the identity of the perpetrators.

Amid this, the Bengaluru edition of the Times of India has gone a step further to altogether deny the anti-CAA protesters’ assault on the police.

In a report published on 14 March, the newspaper wrote that there has been no news substantiating the claims that anti-CAA protesters, women hurled stones, beat and fired at police. Ironically, this ‘misinformation’ was in total contrast to what the Delhi edition of the newspaper reported in the first week of March.

This is from today's TOI Bangalore. Writer @RachelChitraTOI says "there has been no news" of anti-CAA protesters hurling stones and firing at policemen.
Unbelievable ignorance. How about reading what your Delhi reporters are writing (pic 3)? Or, how about some reading anyway? pic.twitter.com/0prLah7AWH

Violence has been a part of anti-CAA protests in New Delhi from the very beginning when protesters set buses on fire and vandalised properties in December. Several policemen were injured in the December attacks.

If a section of the media is now downplaying the fatal attack on police in Chand Bagh, it is only being consistent in downplaying the violence by anti-CAA protesters in December. At that time, this section had trained its criticism largely on the police and given the violent protesters an almost clean-chit.

The latest denial of the brutal attack by anti-CA protesters on police, however, is a new low.