How The Yogi Plans To Light Up Uttar Pradesh By 2019 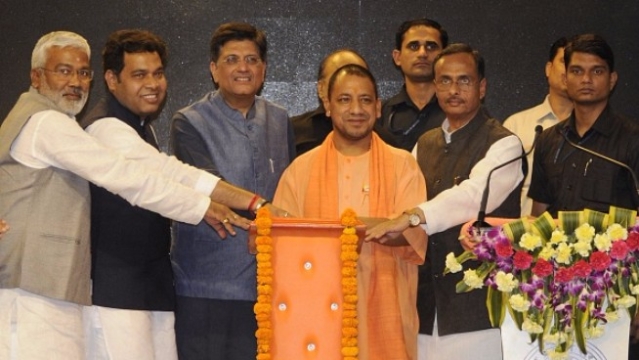 The Yogi Adityanath government in Uttar Pradesh took a major step on Sunday (23 July) that will give a fillip to its goal of providing ‘24/7 power for all’ by 2019. Following in the footsteps of the Modi government in Delhi, which has distributed free gas connections to millions of poor women under the Ujjawala scheme, the Adityanath government has decided to provide free electricity connections to Below Poverty Line (BPL) cardholders in the state. Those who are poor but don’t have BPL cards will also benefit as they will have to shell out only Rs 80 to Rs 120 for a new connection.

The move is part of the ‘24x7 Power for All’ (PFA) project, a joint initiative of the power departments of the Government of Uttar Pradesh and the Government of India. The objective of the PFA is to connect all unconnected households in a phased manner by 2019 and to ensure 24x7 quality, reliable and affordable power supply to all domestic, commercial and industrial consumers.

But challenges before the state government are daunting. The state’s per capita power consumption stood at 524 kilowatt-hour (kWh) in fiscal year (FY) 2015-16, which is half the national average of about 1,075kWh.

Of the 2,89,46,089 rural households, only 32 per cent (92,72,706) are electrified as per the records of the distribution companies (discoms). Another 29 per cent (84,62,695) have access to power but are yet to be formalised. Of the remaining 39 per cent (1,12,10,688) households, infrastructure is being rolled out under schemes that are currently underway, which will cover another 50,000 households. But this still leaves more than 21 per cent (60,00,000) rural households that need electrification. Additionally, 15 lakh urban households also need to be electrified.

Another big challenge is metering lakhs of unmetered connections. Of 1.70 crore registered domestic households, about 68 lakh are still unmetered and, as noted in the preceding paragraph, 84 lakh connections need to be formalised. This is critical for discoms to achieve a turnaround.

Apart from increasing power supply to 24 hours, the government also aims to make power accessible for 10 hours to agricultural consumers by October 2018. However, feeder segregation would be key to achieving this, apart from effectively managing peak demand. So far, the government has sanctioned schemes for feeder separation in 28 districts for complete works and 11 more districts for partial works.

Demand for power will also increase as the state charts the development course. The peak demand is expected to rise from 17,000 megawatt (MW) today to 24,000MW in 2024, and energy requirement from 108,853 million units (MU) today to 160,903 MU in 2022. This calls for greater generation capacity, vast improvements in transmission network and expansion as well as augmentation of the distribution network.

Currently, the Uttar Pradesh government’s total contracted capacity is 22,602MW, a majority of which is coal-based. It plans to further expand capacity by more than 11,000MW by 2022. As far as enhancing the transmission network is concerned, state discoms like the Power Grid Corporation of India Limited and UP Power Transmission Corporation Limited are planning to substantially augment their capacity levels. Issues such as overloading of transformers and congestion are also looked into and a new system accommodating contingencies to resolve these problems to provide reliable power is being planned.

The government is also planning significant distribution capacity addition, increasing it from 44,000 megavolt-ampere (MVA) at 33 kilovolt level today to more than 52,000MVA by the end of 2019. The government will come up with a new metering policy, install smart metres to combat problems such as last-mile connectivity, high losses and power theft.

In addition to fixing generation, transmission and distribution capacity problems, the government also aims to drastically cut the aggregate technical and commercial (AT&C) losses of discoms to 14.86 per cent by FY 2020. These stood at 34.22 per cent in 2015, when the state government entered into an agreement with the centre under its flagship Ujwal Discom Assurance Yojana (UDAY).

The government is also planning to add 2,767MW of grid-connected renewable energy plants and 58.6MW of off-grid projects by FY 2019. It also aims to reduce electricity usage by about 15 per cent, which roughly translates to 1,500MW of avoidable capacity through measures such as old pumps used for agriculture with new energy-efficient ones and by distributing light-emitting diode, or LED, bulbs under the UJALA scheme.

Both the centre and the state government have come out with a year-wise plan and clear targets to achieve. If implemented within the planned time-frame, the Yogi Adityanath-Piyush Goyal duo may end up lighting all of Uttar Pradesh by 2019.