If SC Wants A Mediated Solution To Ram Mandir, It Should Keep Left Out Of The Process 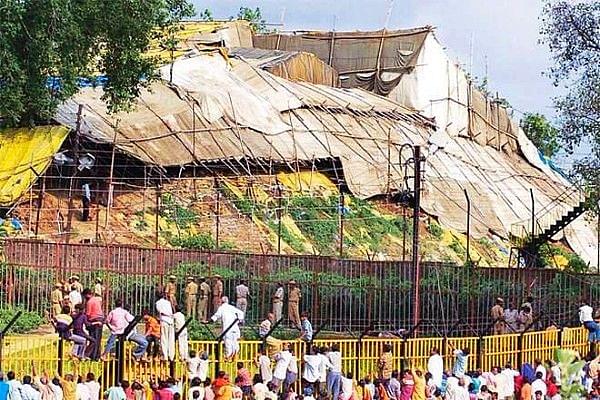 It is interesting, but not surprising, that the five-judge Supreme Court bench that is hearing the Ayodhya-Ram Mandir case should again consider the idea of mediation as the only logical way of resolving this dispute. A decision on identifying a mediator or a mediatory panel may be announced on 6 March.

The idea of mediation is as old as the dispute. It was suggested by former chief justice of India J S Khehar in 2017, who even personally offered to mediate. Mediation was attempted by the late prime minister Chandra Shekhar in 1991, but Left historians scuttled it when they batted – without any supporting evidence – for the Babri Masjid Action Committee. When the Allahabad bench gave its verdict in 2010, the Left historians gave false evidence in a bid to obtain a different verdict. (For more on Left perfidies, read here and here).

More recently, before the case came up for a hearing, Sri Sri Ravi Shankar tried his hand at mediation and even got one Muslim party, the Shia group, to agree to his plan.

Earlier this month, Rajmohan Gandhi, grandson of Mahatma Gandhi and no closet communalist, offered a simple compromise. Writing in The Indian Express, he had this to say: “The bare bones of a settlement are not hard to identify. One, the Hindu side admits the error in demolishing the mosque. Two, the Indian state admits its failure to prevent the demolition. Three, the Muslim side acknowledges the Hindu community’s wish to see a Ram temple rise on the site as also the Hindu community’s belief that a temple had once stood where the Babri Masjid was built. Four, not far from the site, and yet not too close to it, space for a new mosque is made available by the Hindu side and the Indian state. If necessary, the four steps can be simultaneous. In this dream-like scenario, acknowledgement of wrongdoing and restitution leads to justice as well as reconciliation.”

Rajmohan Gandhi is slightly misleading on one point: he suggests that the existence of a temple below the site of the Babri Masjid was only a Hindu belief, when archaeological evidence has clearly established this as fact. And if we accept this, there is need for one more acknowledgement, if not an apology: the Muslims in the dispute must acknowledge that many temples were destroyed by Muslim rulers in the past in their iconoclastic zeal. Even if there is no clear evidence that a temple was actually demolished to build the Babri, one can at least admit that building a mosque over an allegedly ruined temple on ground considered holy by Hindus was a mistake.

So, true reconciliation and understanding must talk of all aspects of the Ram Janmabhoomi-Babri issue. But we can let this pass in a general spirit of forgive and forget, if what Rajmohan Gandhi has suggested is actually accepted in toto by all parties.

But the Left – and those who make a living out of bogus secularism – will not easily let go. They have never believed in actually promoting truth and reconciliation for the simple reason that if Hindus and Muslims can bury the hatchet, then there will be no need for middlemen like them to make a living out of a secularism that is essentially Hinduphobic. There will be no invites to global seminars on the status of minorities in India, no five-star invitations to give the US Congress evidence on the 2002 riots in Gujarat, etc.

Not surprisingly, barely a week after Rajmohan Gandhi suggested his idea of a mediated compromise, Apoorvanand, a Hindi professor at Delhi University, rubbished it, calling the proposal “A Rotten Compromise.” Apoorvanand is a Hinduphobic intellectual, and his Wikipedia profile calls him an “avowed secularist” and a “tireless champion of minority rights. He is one of the most vocal critics of the Sangh Parivar in the Hindi belt.”

Assuming this is how the man would describe himself, it is obvious that he is not for defending human rights, but “minority rights”. In India, this minority is all of 200 million in number, and nowhere in the world would this kind of number be eligible for being called a minority.

If the Supreme Court really wants a mediated solution, it should be looking for participation by the likes of reasonable intellectuals like Rajmohan Gandhi and not rogue ones like Apoorvanand. If it includes any Left intellectual in the mediation process, the idea will be DOA – Dead on Arrival.