Independence Day: A Moment To Take Pride In Indian Achievements And To Dream Even Bigger 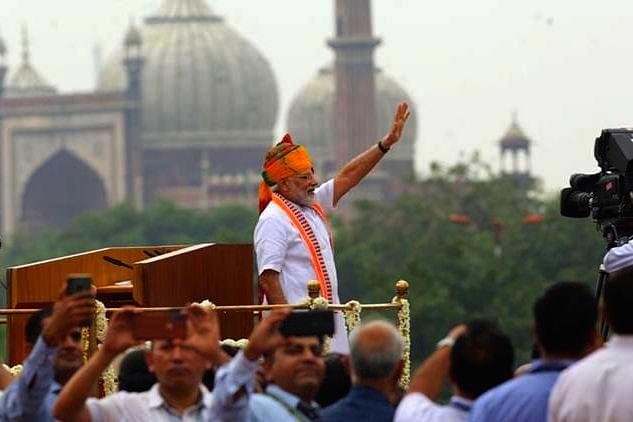 Prime Minister Modi at the Red Fort on Independence Day

Max Muller wrote this in his book India: What It Can Teach Us.

If I were asked under what sky the human mind has most fully developed some of its choicest gifts, has most deeply pondered over the greatest problems of life, and has found solutions of some of them which well deserve the attention even of those who have studied Plato and Kant, I should point to India.

Max Muller in his book, India: What It Can Teach Us.

As India celebrates seventy two years of independence as a nation state today, it is with great hope and confidence that Indians peek into the future.

A country, which may be a young nation state in the current form but a civilization, which for thousands of years has been the guiding light for humanity, reasserts its rightful place today in matters of global significance.

Since the Indian independence on this day in 1947, India just took the boldest step yet in integrating the state of Jammu and Kashmir with the rest of the country. Ideally, Sardar Patel should have been entrusted to seal the full and unconditional integration of the land of Lalitaditya Muktapida with India.

Under the decisive leadership of Prime Minister Narendra Modi and Home Minister Amit Shah, Article 370 — the divisive, restrictive and oppressive instrument of alienating Dalits, women and refugees from partitioned Pakistan — has been revoked.

“Ek desh mein do Vidhan, do Pradhan aur Do Nishan nahi challenge”. This was the ideal for which Syama Prasad Mukherjee, the founder of Bharatiya Jan Sangh and one amongst the tallest inspirations of the Bharatiya Janata Party, sacrificed his life in Srinagar in 1953.

On this Independence Day, it is such a gratifying feeling to know that his supreme sacrifice did not go in vain.

Prime Minister Modi and Home Minister Shah have ensured that Pakistan has not been able to internationalize this issue. Jammu and Kashmir was always an integral part of India.

With solid legal backing, meticulously planning for the Article 370 revocation with firm intent, India has demonstrated that the world also endorses this position. The world respects India’s decision because we have been consistent and never aggressive.

India is gaining this respect and attention in other fields too. This government has clearly outlined its vision to make India a $5 trillion economy in the next five years. This economic growth is meant to be inclusive as well.

The government is tirelessly working to ensure that every Indian has access to affordable healthcare. Nearly every Indian household has access to power and cooking gas today. Most households have a bank account. The country, including the remote rural areas, is now well connected.

These are basic amenities which any compassionate government aims to provide to its citizens. Unfortunately, it has taken India 72 years to get to this point. Nonetheless, the idea should be to look at future and set even firmer and compassionate goals.

That’s what this government has done — housing for all in the next few years and piped drinking water for all households in the next five years are the next ambitions.

There is no doubt that the Modi government will address these areas, for this is the government that is serious about creating an empowered, healthy and purposeful citizenry.

This government recognizes that improved ease of living itself improves the social capacity, which then ensures robust economic activity. There is no better way to lead a country on the path of development than by ensuring the well-being of its citizens and enabling them to achieve their visible and latent potential.

India rescues her stranded citizens from around the world. We also help other countries in rescuing their citizens from conflict zones. Government services are just a tweet away.

Feedback from citizens is actively sought by the government and inputs on a variety of areas accounted for to improve governance.

The architecture of governance has been fundamentally altered in a way that today Indians trust and take pride in the government and look forward to contributing in continuous improvements because they feel like equal stakeholders in the process.

In a few days, Indian Space and Research Organization will land Chandrayan-2 on the surface of the moon. Mission Shakti, an anti-satellite missile test, was successfully conducted in March this year by Indian scientists.

India’s ambitions — and the ability to realize these ambitions in a responsible way with no harm to global protocols and environment — lead the world today. We are setting the pace and we are defining new frontiers for the rest of the world.

Be it our constructive climate action or universal vaccination program, be it our nationwide cleanliness drive or environment protection push — India is seen as the new beacon of hope for meaningful, substantial and agile change.

India always had the wherewithal to do all this and much more. We are just embarking on a glorious dual journey of self-improvement and global influence. All it needed was a firm push from a government that has only one guiding principle — national interest.

Not very long ago, India was considered Vishwa Guru — there is no doubt that we will claim this position back for ourselves. A self-assured and secure country working with positivity and hope, enabled by a determined and strong-willed government, acting for India First will make this happen.

On this solemn occasion, let us be guided by the immortal words of Gurudev Rabindranath Tagore:

Where the mind is led forward by thee into ever widening thought and action. In to that heaven of freedom, my father, LET MY COUNTRY AWAKE!

This article is published here with the author’s permission. You can read the original article here.