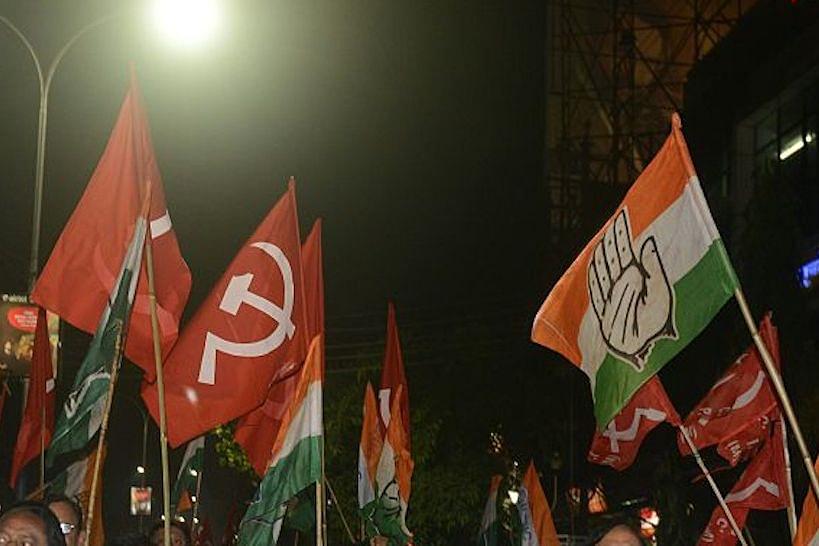 In 1848, Karl Marx and Friedrich Engels wrote The Communist Manifesto, which would go on to become one of the most influential political documents in history. The 10-point program for “the communist revolution” advocated for:

A century after its publication, India’s Congress party would faithfully implement many of the ideas put forward by Marx and Engels, yet it escaped being labelled “communist”.

Jawaharlal Nehru spearheaded the creation of the Planning Commission in newly-independent India and wanted to define its purpose as,

It was Sardar Patel who pushed back against this formulation and had the language removed.

Nehru removed the right to property as a fundamental right, and his daughter Indira Gandhi faithfully carried forward his economic ideas, nationalizing banking and other industries and raising income tax rates to over 90% (thus creating incentives for black money generation) over the 1970s.

The results of “centralization of credit in the hands of the state,” a legacy of Indira Gandhi’s bank nationalization, have been visible over the last decade.The Sonia Gandhi-Manmohan Singh government’s notorious “tele-banking” approach of exerting political influence to have bank loans sanctioned to crony-industrialists nuked India’s banking system, with a mountain of bad loans decimating the economy and eroding public trust. It has been an arduous journey of reform and renewal over the last five years, and we are still not completely out of the woods.

And, it was not until the telecom revolution (ignited by the new telecom policy in 1999) that seeded the mobile phone revolution, the deregulation of satellite television broadcasting, and the construction of roads and highways, through projects like the Pradhan Mantri Gram Sadak Yojana and Golden Quadrilateral initiated by the Atal Bihari Vajpayee government, that the state’s monopoly on communication and transport was broken.

By faithfully sticking to the communist playbook, yet positioning itself fraudulently as a “liberal” party—thanks to a compromised media that was content to live off crumbs tossed at it—the Congress party and its controlling dynasty turned India into a more benign version of North Korea. It took the reforms of P V Narasimha Rao—a lifelong Congress party man and former prime minister who the Congress and its first family have whitewashed out of history—and A B Vajpayee to break the shackles after over four decades had passed since the end of the British Raj.

The Congress party’s roots and impulses in hard-left economic thinking are important to revisit as India elects a new government. More precisely, the Nehru-Gandhi dynasty has favoured state control and strangulation of the private sector because any increase in economic freedom for larger society undermines the power and salability of the dynasty’s brand. In the emancipation of India’s poor lies the decimation of the dynasty’s grip on power and nobody knows this better than the dynasty itself.

The left flank within the post-independence big tent Congress party first expanded its influence with the passing of Sardar Patel in 1950. Slowly but surely, all non-left leaders were sidelined within the party as the dynasty cemented its control, first with Indira Gandhi’s installation as the party president (under the watch of Prime Minister Nehru) in 1959 and subsequently when the “Syndicate”, led by Indira Gandhi took firm control in 1969, ejecting centrists like Morarji Desai.

In echoes of its current alignment with the infamous “tukde tukde gang” that has professed its desire to break up India, the Indira Gandhi-led Congress allied with the Communist Party of India (CPI). This was the CPI that is alleged to have supported China in the 1962 India-China war. Crucially, with CPI’s Saiyid Nurul Hasan installed as HRD Minister by Indira Gandhi, the corruption of education and history began. India’s history was rewritten to give it the leftist slant that today scholars across ideologies are questioning it. When Indira Gandhi imposed her dictatorship on the country in 1975, the CPI supported it and said it was “necessary and justified”.

In 2004, when the Congress party won 145 seats—just 7 seats ahead of the BJP—It was the 59 seats brought to the table by the Left Front communist block that enabled the Sonia Gandhi-Manmohan Singh government to take power in New Delhi. Economic reform, which India had sustained for over a decade with a consensus on growth achieved across party lines, was put into cold storage even as the first UPA government cashed in on the intensive work undertaken by the Vajpayee government. The fiscal bounty India witnessed between 2004-14 was frittered away, as outlays rather than outcomes were favoured by the UPA government.

It is a curious combination of hard-left economics and ultra-conservative religious support from minorities that kept the Congress and its dynasty in power for decades. Starting from the time when Indira Gandhi consolidated Muslim conservative leaders and gave them recognition to decide the Muslim community’s personal laws under the umbrella of All India Muslim Personal Law Board in 1972, to Rajiv Gandhi’s shameful intervention against the Supreme Court’s ruling in the Shah Bano case in 1986, to the present-day Congress party’s campaign opposing Triple Talaaq, the party’s stand against individual freedom and in favour of minority religious orthodoxy is clear.

It is bizarre, and a telling indictment of India’s media-intellectual complex, that the Congress is still allowed to assert that it stands for “secularism” when, in fact, no other party has done more to discredit that ideal.

Capitalism is Not Just for the Rich

The social mobility afforded by economic growth coupled with rules-based market economics taking centre-stage under Narendra Modi has restored public confidence in the market-based system to some degree. The public has seen over the last 5 years that the rich and powerful are also made to answer for having black money and defrauding banks. The experience of market-driven efficiency in welfare, by way of direct benefit transfers and schemes like Ayushman Bharat, provide confidence to the masses that capitalism is not just for the rich.

Given the significant challenges that remain ahead in job creation, infrastructure development and welfare delivery, a lot remains to be done but reverting to the leftist playbook favoured by the Congress and its communist bedfellows will only land India in a crater yet again. That ruinous playbook, which was favoured for the better part of seven decades, is far from buried—and this general election will be a historic determinant of whether we are prepared to make a decisive break from that failed approach. India will know the answer on 23 May.