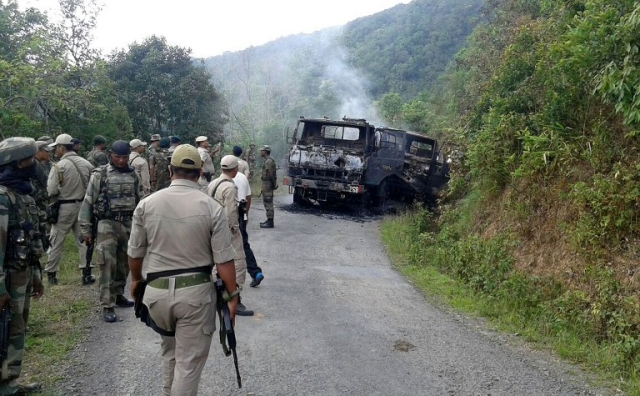 Much as the entire nation has been shocked and outraged over the slaughter of 20 Indian army soldiers in Manipur’s Chandel district bordering Myanmar on Thursday morning, the ghastly incident can hardly be termed as a surprising one. In fact, it was waiting to happen ever since one faction of the Naga insurgent group—the National Socialist Council of Nagalim (NSCN) led by S.S.Khaplang announced its unilateral abrogation of a 14-year-long ceasefire with the Government of India in March this year. About 400 armed cadres of the NSCN (K), which is fighting for a sovereign Nagalim (comprising present-day Nagaland and the Naga-inhabited areas of Manipur and Myanmar), shifted to bases in Sagaing and Kachin provinces of Myanmar.

Thursday’s attack, which claimed the lives of 20 soldiers, including one junior commissioner officer (JCO), will definitely not be the last. And not just because various militant groups of the North East that are sheltered in the above-mentioned provinces of Myanmar joined forces in April this year to form the United National Liberation Front of Western Southeast Asia (UNLFW) with Khaplang as its chairman.

The UNLFW is, by all reckoning, quite a powerful group, comprising as it is of the NSCN(K), the Paresh Barua-led United Liberation Front of Asom (ULFA), Manipuri insurgent groups like the People’s Liberation Army (PLA), the Kangleipak Communist Party (KCP), Kanglei Yawol Kana Lup (KYKL), People’s Revolutionary Party of Kangleipak (PREPAK), Revolutionary People’s Front (RPF) and the United National Liberation Front (UNLF), the National Democratic Front of Bodoland (Songbijit faction) and Bengal’s Kamtapur Liberation Organisation (KLO). All these, save perhaps the KLO, are heavily armed and have a substantial war chest.

What is also worrying are reports that China is covertly helping some of these insurgent groups. Indian intelligence reports state that the initiative to bring together insurgent groups of North East India under an umbrella body in order to launch coordinated attacks on Indian security forces and strategic installations was launched at Ruili in China’s Yunnan province in mid-2011 . Khaplang, Paresh Barua and leaders of the Manipuri insurgent groups attended this meeting and immediately thereafter, the Manipuri groups formed an umbrella body called CorCom (Coordination Committee).

Most of the Imphal Valley-based Manipuri groups (or the Meitei groups) operate under this banner now. Thursday’s attack was carried out, by their own admission, jointly by the NSCN(K), KYKL and KCP. Paresh Barua is said to be directing operations from a hideout in Yunnan province. Almost all the arms used by the insurgenct outfits are Chinese made. In fact, it was China which played a key role in providing arms and training to the NSCN immediately after its formation many decades ago. Since then, China, despite its denials, is believed to have maintained links with the NSCN.

The Indian intelligence establishment also believes that the NSCN(K) and other insurgent outfits who have bases in Myanmar are getting covert support from the ‘Tatmadaw’, as the  Myanmarese army is known. An ailing Khaplang was reportedly airlifted from one of the outfit’s camps in Sagaing to Yangon by the Tatmadaw for medical treatment a couple of months ago and is said to be recuperating in Yangon.

The Myanmarese generals may have their own reasons for supporting the Indian insurgent outfits: their own forces are ill-equipped and vastly overstretched fighting various insurgencies raging across that country, and they may have enlisted the Indian outfits to fight their battles against the Myanmarese outfits. Many believe that the Indian outfits, which have substantial funds, have been regularly bribing corrupt Myanmarese generals in return for protection. And anyway, the Tatmadaw has neither the wherewithal, nor the inclination, to open another front by taking on Indian insurgents in the two provinces of Sagaing and Kachin where its writ clearly does not run.

It is also an undeniable fact that all these insurgent outfits, especially the NSN(K) and the Meitei groups, draw sustenance from the support they enjoy among the ethnic groups they represent. Had it not been for this vital support, they would not have been able to sustain their battles and wars. Large sections of the Meiteis, for instance, still cannot forget the forcible inclusion of what was then the independent kingdom of Manipur into the Indian Union in September 21, 1949.

Manipur, and the rest of the North East India, has been largely neglected in terms of development since then and this has bred many insurgencies there. Lack of development, the apathy of successive regimes in New Delhi to the genuine concerns and problems of the North East, chronic unemployment and severe lack of job opportunities, endemic corruption and the resultant poor quality of life has naturally led to many in those states to blame the Indian State for their miseries and, as a result, to support the insurgent groups.

Deliverance from India, many in Manipur and some of the other North Eastern Indian states believe, will be the panacea to their problems. People’s anger against India has also intensified over the decades due to large-scale human rights abuses by Indian security forces engaged in counter-insurgency operations in these states. Arbitrary arrests, custodial killings, rapes and molestation of women, midnight raids on houses and abusive behaviour towards the civilian populace have led to alienation of the local population who could have, otherwise, been of help in fighting the extortionist rebels.

All this said, it must be acknowledged that another major reason for the continued existence of these insurgent groups, despite the decades-long counter-insurgency operations against them by Indian army and para-military forces, is their nexus with politicians cutting across most parties. It is a well-known fact that many politicians, including top ones in these insurgency-affected states, have strong links with the insurgent outfits. The insurgents help these politicians win elections and, in return, the politicians provide protection to them. It is an open secret that militant outfits in Manipur and Nagaland levy taxes on state and central government employees, including top officials, and collect protection money from businessmen, traders and contractors. The police, especially in Manipur, are corrupt to the core and are often more feared than the militants. Insurgency is the only thriving ‘industry’ in many parts of the North East.

New Delhi’s response to Thursday’s perfidy was expected. The army has been asked to launch an all-out offensive against the rebels and liquidate them. But this ‘all-out offensive’ has to be launched with a lot of tact and care and a holistic approach needs to be adopted for facilitating a permanent solution of this long-festering problem of insurgency in the region. At the very outset, the senior officers directing the stepped-up counter-insurgency operations should issue strict instructions to the troops to respect human rights and stop them from committing any excesses. Utmost care has to be taken to ensure that the civilian population is not disturbed, harassed or inconvenienced in any manner during the operations and violations, if any, are addressed swiftly and transparently.

But anti-insurgency operations on Indian soil alone won’t suffice. New Delhi has to rope in the generals in Myanmar and make them agree to surgical strikes by Indian forces on the rebel camps inside Myanmar. This will take time, but efforts should be launched right away. India has, over the past couple of decades, invested a lot of time and effort in winning over Myanmar’s military junta, and New Delhi should now do more to bring the generals on board. They will agree only if India promises them a lot of aid, including training, arms and equipment for their troops. The military junta there needs to be convinced that allowing India hot pursuit of rebels across the international border into Myanmar is in that country’s best interests. India had done it in the past with Bhutan, and Myanmar, though more complex, should not be a problem.

India also needs to take up the issue of China providing shelter and covert support to North East insurgents with Beijing. Just as Prime Minister Narendra Modi dropped a clear hint during his visit to China last month that India would be forced to reciprocate if China continues to issue stapled visas to residents of Arunachal Pradesh, he could also tell the Chinese clearly that continued support to the insurgents could cost China very dearly in terms of curtailment of bilateral trade. After all, China exports much more to India than India does to China and India can easily erect many non-tariff barriers that could stem the flow of Chinese goods into India. That’ll hurt China, and China is one country which understands business very well.

New Delhi also needs to act firmly to break the politician-militant nexus in the North East and put an end to endemic corruption there. So far, the Government of India has remained content with just pouring huge sums of money for development projects in the North East. Most of this has been siphoned off by corrupt politicians, bureaucrats and businessmen. It is high time New Delhi puts in place a mechanism to monitor the execution of all projects in the region and mete out exemplary punishment to anyone indulging in corruption. Once again, the present NDA regime headed by the incorruptible Modi appears to be the best suited to do this. At the same time, a new vision is required for the development of the region to address chronic backwardness and unemployment that plagues the region and fuels insurgency there.

Only then can insurgency be rooted out completely from the North East. Counter-insurgency operations alone will be grossly insufficient for that.