Memo To Jadavpur Protestors: Kashmir’s “Azaadi” Is Actually Bigotry Hiding Behind The Mask Of Freedom 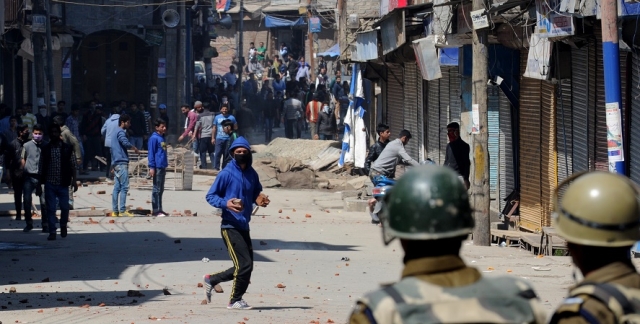 “Azaadi” based on language, linguistic or religious identity is essentially sectarian in nature. Phony is an “azaadi” that is not based on protecting fundamental human rights and diversity.

Even before the dust has settled on the anti-national sloganeering at Jawaharlal Nehru University (JNU), where some elements shouted pro-Afzal Guru slogans and sought the ruin of India, news from Kolkata’s Jadavpur University suggests that the disease is spreading. Among other things, a rally yesterday (16 February) demanded “azaadi” for Kashmir and Manipur. (“Kashmir maange azaadi, Manipur maange azaadi”).

To be sure, if these slogans were only about demanding respect for the human rights of ordinary citizens which have sometimes been violated by the armed forces while fighting separatism and insurgencies, then one need not fret too much about them.

The armed forces need to be taught to respect human rights, if necessary by loosening the protections given to them under the Armed Forces Special Powers Act. But a closer look at the explanations given by some of the students for their slogans makes one wonder if they at all understand the meaning implied in the word “azaadi”.

A Hindustan Times report apparently asked one of the sloganeers what he meant when he demanded “azaadi”, and this is the reply he got: “Azaadi for us signifies freedom from atrocities, atrocities of the Modi government, and freedom from intolerance.”

The second part of the statement is a dead giveaway, for here is a student living in West Bengal, where the Left ran a mafia-style administration for 34 years, and the Left’s nemesis, the Trinamool, ran another five years of the same, and he thinks the “atrocities of the Modi government” are what matter.

While the newspaper quoted Sarnendu Barman of the Faculty of Engineering and Technology Students’ Union (FETSU) as saying said they did not back slogans supporting Pakistan, but “police atrocities on the students inside the campus (of JNU) could not be tolerated….”. The JNU crackdown by the police clearly resonates in his campus, too.

He is apparently unaware of the kind of damage being done by the Democratic Students’ Union in JNU, which, apart from being responsible for the slogans, was earlier trying to ignite trouble on campus by posting nude pictures of Hindu gods, according to this ABP News story.

One can question what “atrocities” the police committed at JNU beyond arresting the union chief on sedition charges, and which a court duly endorsed, but the larger point to underline is whether the students, ever intoxicated by abstract calls for “freedom” and “azaadi”, have ever stopped to consider what these terms really mean.

Kashmir’s “azaadi”, for example, has meant the turfing out of the Pandits from the valley, and it is in defence of India’s territorial integrity and to prevent ethnic cleansing from proceeding further than the army is even there. The “azaadi” of Kashmir has meant the “barbaadi” of the Pandits, and effectively translates to bigotry.

“Azaadi” based on language, linguistic or religious identity is essentially sectarian in nature.

Phony is an “azaadi” that is not based on protecting fundamental human rights and diversity, which has been the problem in West Bengal for four decades now. After the Naxals were brutally destroyed by the state, what we saw was the institutionalised structural violence of the CPI(M)-led Left Front that purged universities of their independence, and ended tolerance for other ideologies.

The Left ruled rural Bengal through its mafia-like cadres, and after the Trinamool came to power, this rogue element merely shifted loyalties. That’s all. Neither the Left nor Trinamool Congress has been in favour of “azaadi” for anybody beyond their cadres. Lalu Prasad’s “jungle raj” rules West Bengal too.

Under the Left, the “azaadi” of dissenters like Taslima Nasreen was curtailed, and under Mamata Banerjee, Islamism is gaining ground, as was evidenced in the attack on Kaliachak in Malda district, where Muslim mobs burnt down a police station. No students union protested this excess “azaadi” given to property destroyers.

“Azaadi” often means defending the right to my kind of sectarianism.

The Jadavpur students ought to know that we live in a post-nation-state world, where the old option of ethnically cleansing people of different ethnicities, ideologies, religious faith, and races no longer exists. Demanding “azaadi” for one group thus involves denying it to others – as is the case in Kashmir.

In the 21st century, where people move across borders, both internal and external, an ‘azaadi” based purely on the markers of cultural identity is meaningless. Nation-states are a relic of European history, and the only reality today is that states have to enable people with different identities – people from many “nations”, so to speak – to live under a common rule of law and with the same basic human rights.

Today’s states have to accept the reality that the ethnic and religious mix of countries will keep changing constantly under the force of demography and economic opportunity. We will have many “nations” living together in one state – whether it is Syrians rushing to Germany, or Somalis to France, or Bangladeshi Hindus and Muslims to India.

The job of the state is to ensure basic human rights to each one and enforcement of the rule of law. Esoteric calls for “azaadi” based on ethnicity or religious affiliation are irrelevant.