Minorityism At Work: How A Delhi Church Tried Religion Card To Get Away With Encroachment 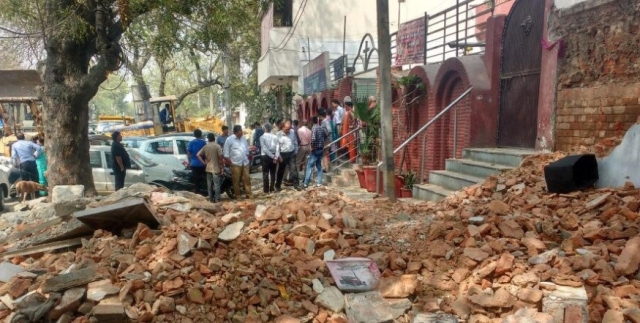 A church in New Delhi has levelled grave charges of religious discrimination on the civic body, alleging that it was singularly targeted in an encroachment demolition drive while an adjoining temple was spared.

Even though the church has since made a U-turn and is now calling its allegation a result of a "confusion" – details of which will come later in the story – it is to be noted that the church quickly escalated the matter to the minority commission alleging they were targeted with "ulterior motives". Not just that, the church also took it to global Catholic media, citing it as a case of "growing anti-Christian sentiments and propaganda".

Amid this, Municipal Corporation of Delhi (MCD) north assistant commissioner Santosh Rai, who found himself at the receiving end of the communal allegations, has expressed his displeasure with the conduct of the church, calling its management "nuisance creators" who “should have ideally been booked for hampering government work”.

It all began on 15 March, when the civic body was carrying out its weekly demolition drive. Delhi High Court has identified 29 zero-tolerance zones in the capital city and ordered all encroachment to be razed down. The lane on which the Methodist Church stands, in Dhaka area of north Delhi's Mukherjee Nagar, falls under the Civil Lines zone of north MCD.

Bulldozers started demolishing encroachment at around 2 pm and reached the church area by evening. The next in line was the Om Narayan Dutt Temple.

According to Public Works Department (PWD) junior engineer D C Jaiswal, as bulldozers reached the church and began to demolish a raised cemented pavement illegally built by it, members of the Christian community gathered and began protesting. The civic body wanted to further raze down the illegal steps and the grill that the church had built, but protests delayed the work and by 5.50 pm, the drive was wrapped up for the day and the team left.

The next drive would happen five days later, on 20 March.

In the intervening period, the church went to the Delhi Minority Commission (DMC) and complained that no notice was served to them and that it was done "intentionally". In the complaint to the minority commission, a copy of which is with Swarajya, the church pastor-in-law N C George alleged, "...there are still certain encroached visible structures adjacent to the church which was deliberately ignored. We being minority, feel that the Church has been targeted and was harassed by this illegal act at the time of our festival season." (Passion Week began on Sunday and Good Friday is on 30 March). George is also the president of the Global Council of Indian Christians (GCIC).

DMC member Anastasia Gill visited the site shortly after the complaint on 15 March and concluded that there was discrimination and told as much to a newspaper, "I visited and inspected the site and believe that this is a discriminatory practice. It has disturbed religious sentiments and is an attack on the Christian community. The rights of the minorities are under threat. The area outside the temple next door has not been touched. Is the system working towards maintaining harmony or disturbing it?” She also served a notice to north MCD and the police demanding a reply by 6 April on the allegations made by the church.

It is to be noted that the original complaint by the church to minority commission did not talk about the temple being untouched. However, in statements to the media in the following days, George repeated Gill’s observation and said that they were targeted while a temple was spared.

These allegations were refuted by Rai, who told Swarajya that no notice is needed to be served in these cases as the orders have come from the High Court.

He said, "there were a few structures we encountered before the church that could not be demolished on the same day. Those were built with thick mortar and the bulldozers could not destroy them. I was informed about the issue and had ordered the team to bring JCB machines on the next drive to deal with it and that was done."

"There is no religious angle to this. This is no conspiracy," Rai said.

A visit to the site, conversation with locals and temple authorities, along with photos and videos of the episode, seem to support Rai’s account.

PWD official Jaiswal said that the drive had to halt at some point that day and it so happened that it stopped just before the temple. “All work can’t be completed in a day,” he said, and added that the temple authorities, in fact, had already begun razing down their part of the encroachment (on March 15) as they saw the bulldozers in action.

This account is supported by locals. A shop owner opposite the temple who witnessed the drive, said, “the temple began breaking its piaoo on that same day itself (on 15 March). By the next day, they had completely brought down the piaoo. When the JCB came (on 20 March), they only found rubble. So how can we say the temple was spared?”

Temple trust member Vijay Chhabra said that when he saw the drive, he informed the civic body that he would himself destroy the illegal piaoo (a free service providing drinking water to passersby) before the next drive and promptly deployed men on the job. "Bulldozers usually end up doing more damage, so we decided to remove the encroachment ourselves," he said, adding that the temple had organised a langar (free food stall) on that day.

In any case, on 20 March, the civic body returned with JCB machines and demolished the church steps and cleared whatever was left in front of the temple. However, not before the members of the Christian community again gathered to disrupt it. Rai shared a video of the day on WhatsApp that shows them raising slogans of 'Santosh Rai haye haye' and protesting the demolition.

Photos of the second drive on 20 March (below) show rubble placed outside the temple even as the church steps are intact. According to Rai, this is “proof” that the allegations of the church are false that the temple was spared while they were targeted.

A miffed Rai told Swarajya, "the church management was such a nuisance. They gathered and raised slogans against me. They tried to assault us. They didn't let us work. In fact, such a conduct merits an FIR for obstructing work.”

Curiously, when contacted on 26 March, Gill said that she believes that it was only after her intervention that the civic team returned on 20 March and asked the temple to remove encroachment.

The episode raises several questions. Does demolition of illegal encroachment mean "harassment" as alleged by the church as well as the minority commission? If the bulldozers left some structures un-demolished, is it to be promptly concluded that they were "deliberately ignored"? Was it appropriate for the church management to present the incident to a global Catholic media agency in such harsh words: "This discriminatory demolition highlights the anti-Christian hostility and the aggressions and intimidation suffered by the tiny Christian community"? Notably, the church further told this press agency that “this demolition, during this holy period for the Christian community, hurts the religious feelings of the community and reinforces the growing anti-Christian sentiments and propaganda."

The episode reminds one of 2015, when many churches in New Delhi had come up with a conspiracy theory, alleging that they were systematically targeted in hate crimes by right-wing bodies. Police probe in most cases, as pointed out in this report, showed that the allegations lacked merit as most incidents were petty acts of burglary sans a communal agenda.

These "attacks" were followed by the alleged gangrape of a nun in West Bengal and the Catholic Bishops Conference of India (CBCI) took no time to conclude it as a hate crime. Various Christian bodies called it yet another attack on minorities after the Narendra Modi government came to power. It later turned out that far from being a Hindutva foot soldier, as the CBCI, the media, commentators and the opposition had alleged, the alleged rapist was a Muslim and, that too, a Bangladeshi. In fact, the gang-rape theory was discredited by the court.

An article in Swarajya had then appealed to the two cardinals in India – Baselios Cleemis and Oswald Gracias – to apologise for communalising the West Bengal incident and levelling false allegations against the BJP and the National Democratic Alliance government.

Coming back to the latest incident in Delhi, George told this to Swarajya when asked about the incident, “there was a confusion. Now we have no objection”.

One wonders if the church will retract its earlier statement against the civic body and cries of "anti-Christian sentiments and anti-Christian propaganda" at work?